NYC businesses board up windows ahead of 2020 presidential election

Manhattan business owners including Chanel and Levi’s boarded up their storefronts with plywood on Friday afternoon — as the NYPD warned of potential unrest as the presidential election draws near.

Workers at retail shops in Soho, which were targeted by looters during unrest this summer, as well as shopkeepers near Washington Square Park were nailing up the wooden panels Friday afternoon.

Police had warned shopkeepers in neighborhoods that are usual protest hotspots to take extra precautions before the election, a police official said.

“The NYPD talked to many segments of the business community this week and advised that businesses in or in the area of location that have historically been protest targets, Washington Square and Union Square for example, and gave them advice to take extra precaution,” the official said.

In a letter to businesses and restaurants, the NYPD’s Manhattan South Patrol Borough, which covers 59th Street and below, said they would be implementing safety measures to “prevent pedestrian overflow” onto city streets.

Workers from Warehouse Wines and Spirits at 735 Broadway boarding up their windows today.William Farrington

The safety measures will be “similar to those utilized during major planned events such as New Year’s Eve, Macy’s July 4 Fireworks and Thanksgiving Day Parade,” Assistant Chief Stephen Hughes said in the letter.

Restaurants and businesses will have to move things like furniture, clothing racks, dumpsters and small planters from the sidewalks as part of the plan, the letter says.

The police official added the NYPD did not tell businesses to board up their stores, but left it to the discretion of the owners.

On Friday, a Post photographer saw a number of the Lower Manhattan stores taking the step, covering their windows with wood to prevent damage. 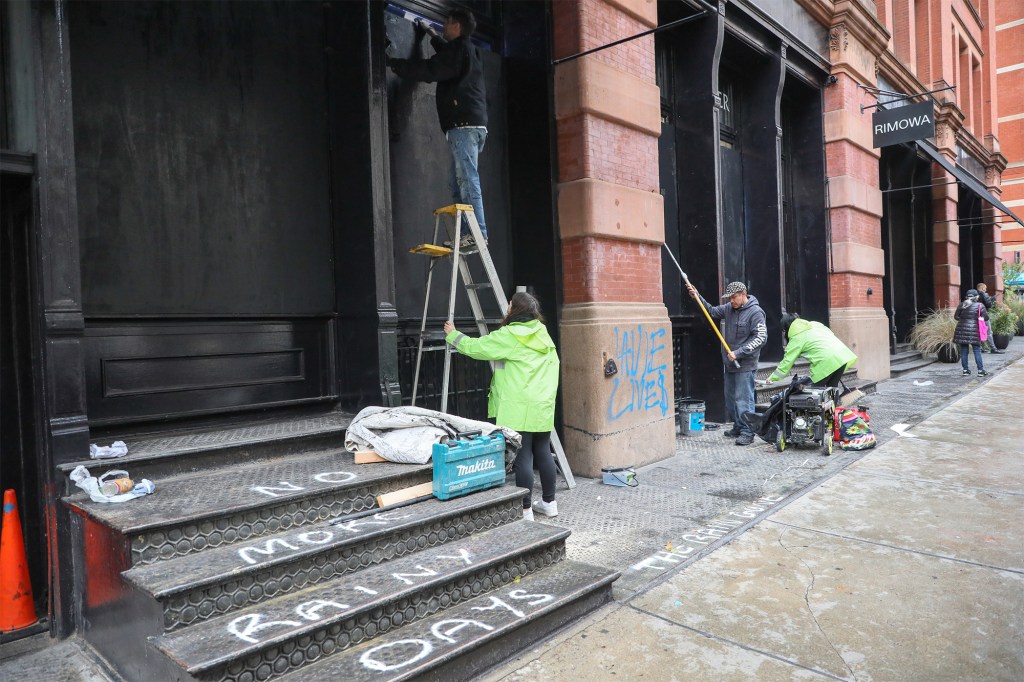 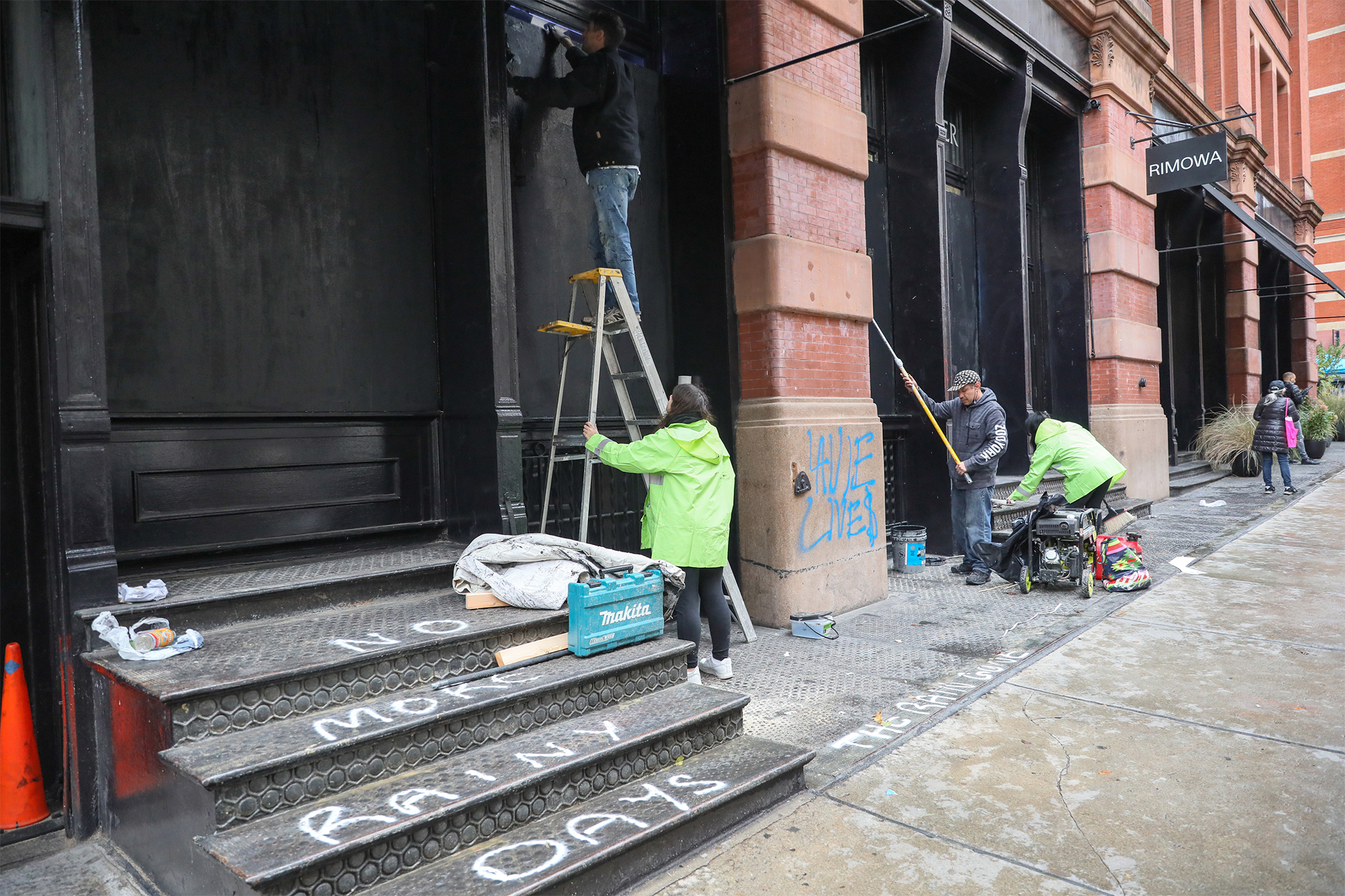 Workers boarding up the windows at Moncler clothing store at 99 Prince St. 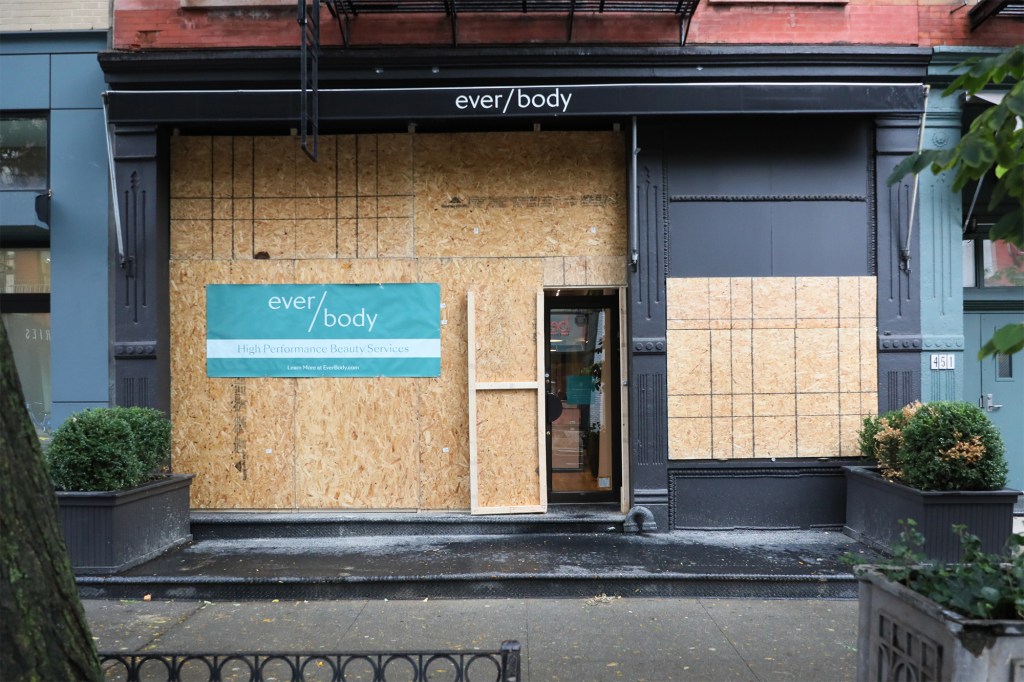 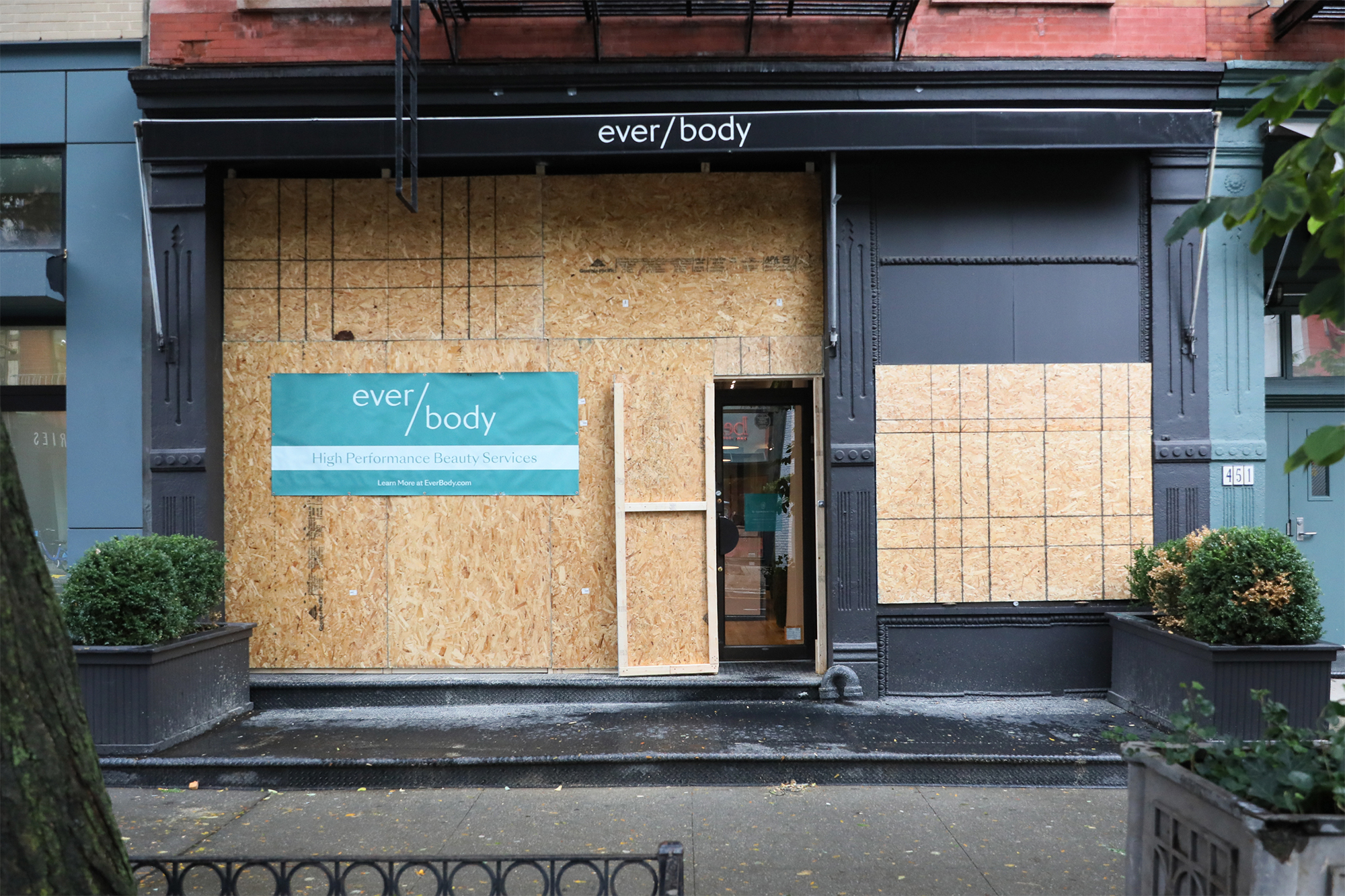 Ever/Body beauty services is seen boarded up at 453 West Broadway in Soho. 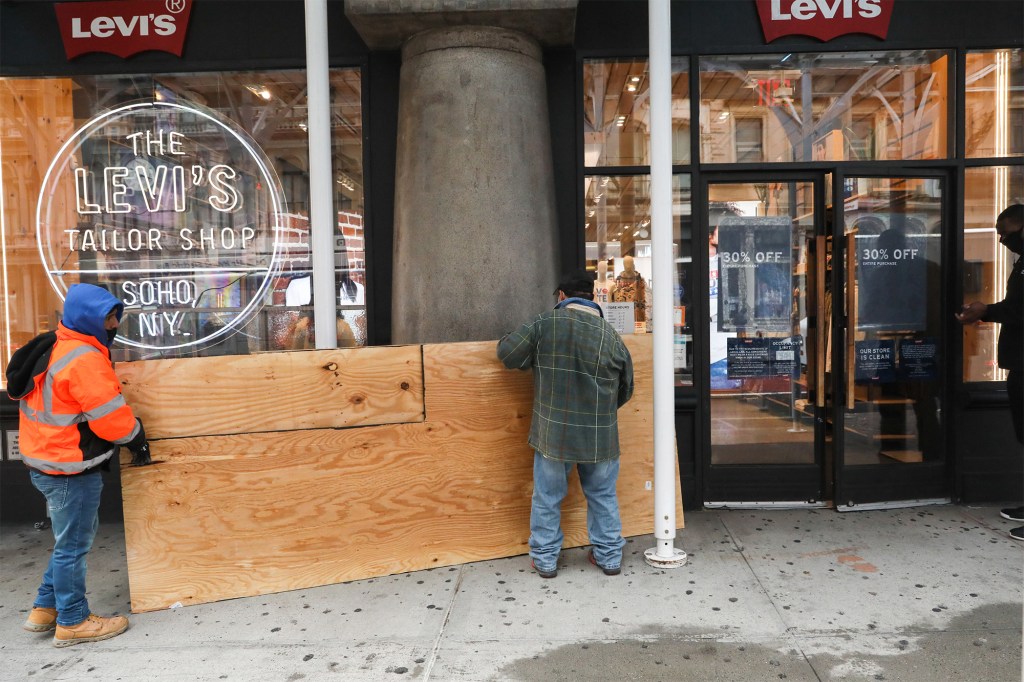 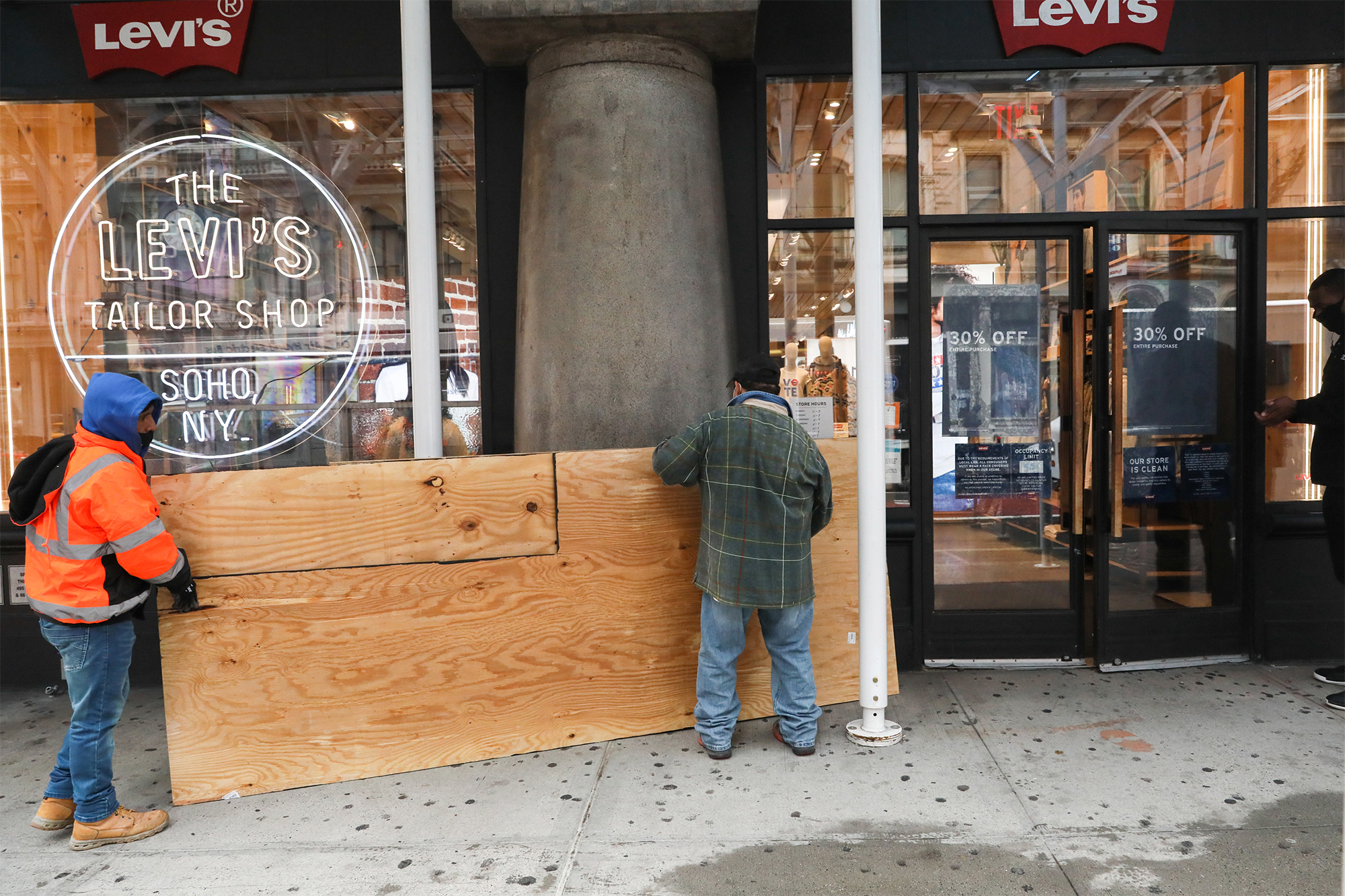 Workers today preparing to board up the Levi's Tailor Shop windows at Broadway between Spring and Broome streets.

A worker at Warehouse Wines on Broadway near Waverly Place in Greenwich Village said Friday that the store was damaged during protests in the summer, so they decided to board the windows but will remain open.

Other shops including Chanel on Spring Street in Soho and Levi’s Tailor Shop in the neighborhood also fortified their storefronts.

Тот Tottenham midfielder Winks scored from 49 yards. This is the 3rd result in the Europa League, all - in this draw
This miss will hurt all men: Molde player missed from half a meter and drove into the bar
Mikel Arteta: I am Very happy with Pepe's game against Molde. Arsenal played well overall
Napoli players came out in t-shirts with Maradona's name and number 10 for the Europa League match
Daniele Bonera: Milan is happy with the game with Lille and only regrets the result
Neymar on Maradona: You will always remain in our memory. Football is grateful to you
If football was a movie, Diego would be its main character. Showsport readers say goodbye to Maradona
Source https://nypost.com/2020/10/30/nyc-businesses-board-up-windows-ahead-of-2020-presidential-election/