Many thrift stores that have been closed during the pandemic are now reopening to Marie Kondo enthusiasts, people who finally did that spring cleaning that's so easy to put off and folks who needed to make room for all the stuff they've bought online.
"We are seeing an overwhelming desire and demand for folks who want to drop off those donations," said Tenee Hawkins with Goodwill of North Georgia, which operates stores and donation centers in 45 counties, including the Atlanta area.

Goodwill's 65 North Georgia stores closed on March 23 and they stopped taking donations on April 19, she said.

It reopened about a third of its stores on May 6, as Georgia eased its restrictions, and they quickly realized that they were getting more donations than they could handle.

When the remaining stores reopened the next week, Goodwill asked people to hold onto their donations to give shoppers time to buy the excess inventory. 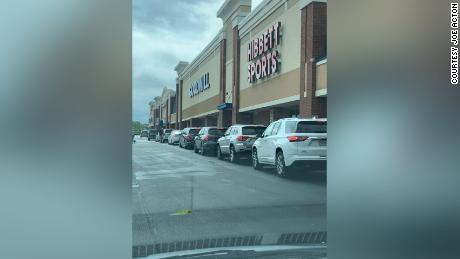 Joa Acton says she'd never seen this many cars lined up to make donations at a Marietta, Georgia, Goodwill store.

They started taking donations again on May 18, Hawkins said.

"There were literally several of our properties ... where there were lines around the building, around the property, with folks wanting to drop things off," she said.

The Salvation Army's thrift stores bring in almost $600 million each year, and the organization is still calculating how badly store closings around the country have hurt revenues.

Only about a quarter of the stores are currently operating.

Maj. Gary Wilson, who oversees the stores in the Salvation Army's southern territory, told CNN that the money from the stores pays for its addiction recovery programs that have still been going on during the pandemic.

"I don't know if folks really realize how important these stores are to us," he said.

Spring is typically their biggest time of year for donations and many local administrators were able to keep doing collections while their stores were closed.

"The different centers had to be rather innovative and start figuring out how they could store these properly," Wilson said. Some rented trailers or had warehouses to handle the overflow.

Both organizations said they are doing everything they can to limit contact during the donation process.

People who drive up don't even have to get out of their cars -- they just pop open their trunk and workers in personal protective equipment collect the donations and leave a receipt.

The Salvation Army also has a contact-free pickup, so people can arrange to just leave their donations on their porch.

That service has been pretty popular, Wilson said, adding that a few areas in his territory -- which runs from Maryland and West Virginia, down to Florida and west to Oklahoma and Texas -- are seeing donation levels that are approaching normal levels at the stores that are open.

"It seems like whatever we're opening, folks are really coming out and supporting us and I hope in return, they're also getting the good deals they were looking for to help them through this tough time also," Wilson said.

Once the donations are collected workers put them aside and no one touches them for at least 24 hours to reduce the risk of contact with any virus that might be on the surfaces. Then the donations are cleaned and sanitized before they're put out on the sales floor.

Hawkins said Goodwill workers have increased cleaning in their stores and have used an eco-friendly mist to treat merchandise and surfaces.

"We're constantly cleaning those high touch areas, wiping things down and making sure that folks are safe and that our merchandise is safe," she said.

Werner goes to Chelsea: Liverpool clearly explained the refusal to Klopp, and Granovskaya pulled off the transfer online
Toni Kroos: in Spain, when I come to the meeting three minutes before the start, I will be the first, in Germany-the last
The homes of Benfica players were threatened after the attack on the club bus
Have you seen the Loco gun? The ball comes out of it with the same sound as when you hit it, but there is no impact! How so?
Chelsea have agreed to transfer Werner for 60 million euros
Ronaldo dressed up as Aladdin, Georgina as a Power Ranger for the children's birthday
During a 6-hour shift, you can't drink, eat, or go to the toilet. Two monologues from the RPL about doctors who are fighting the virus
Source https://edition.cnn.com/2020/05/23/us/thrift-donations-coronavirus-isolation-trnd/index.html?utm_source=feedburner&utm_medium=feed&utm_campaign=Feed%3A+rss%2Fcnn_latest+%28RSS%3A+CNN+-+Most+Recent%29