Philadelphia officials have said they will release the police body camera footage and the 911 tapes in connection with the officer-involved shooting of Walter Wallace Jr., an armed Black man reportedly with a mental health history, following three nights of unrest in the city and elsewhere in the country.

Police Commissioner Danielle Outlaw pledged Wednesday that her office would release the video and audio footage “in the near future,” but will first meet with Wallace Jr.’s family “to ensure they get an opportunity to view the materials first.” 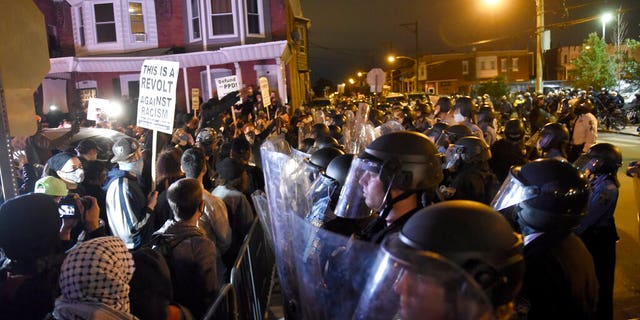 Protesters face off with police during a demonstration Tuesday, Oct. 27, 2020, in Philadelphia. (AP Photo/Michael Perez)

The city’s top cop announced the plan during a Wednesday afternoon press conference with Mayor Jim Kenney and other city officials to go over any updates in the case and detail the impacts of Philadelphia’s second night of riots and looting.

An estimated 1,000 people took to the streets on Tuesday night into Wednesday, ransacking big-name stores, such as Walmart and Foot Locker. During the course of the night, 81 people were arrested, 23 police officers were injured and at least 14 people were shot – including two who suffered fatal injuries, officials said.

Since the unrest began following Wallace Jr.’s death, police made 172 felony and misdemeanor arrests and reported damage to 17 PPD vehicles. A total of 53 police officers were injured, including a sergeant who was “intentionally run over” by a pick-up truck driver, Outlaw previously said. All but one of the injured officers had been released from the hospital as of Wednesday afternoon.

Kenney instituted a citywide curfew that began on Wednesday at 9 p.m. and extended through 6 a.m. Thursday. He also said the National Guard would be deployed and was expected to arrive in the city on Friday and Saturday.

On Wednesday night, explosive devices were reportedly discovered inside a van near Philadelphia’s Center City.

Officials previously said officers fired 14 shots during their Monday evening confrontation with Wallace Jr., who was armed and charged at police despite their orders that he drop the knife. The shooting was caught on video.

Wallace Jr.’s family has said he was experiencing a mental health crisis when police were called.

Officials have not said how many times Wallace Jr. was shot. Outlaw said the officers have been pulled from street duty, but the department would not be releasing their names or any information, such as their race, until the department was sure it would not jeopardize their safety.

Neither officer was equipped with a Taser or any sort of electric energy device.

ISCO could move to Sevilla in January. Lopetegui is personally Interested
Bilyaletdinov about the Champions League: Loco can leave the group. Unmotivated Bayern can be beaten in the 6th round
Zlatan Ibrahimovic: I Thought about retiring, but I wanted to change the mentality of Milan
Vasco da Gama sports Director: Balotelli will be like Maradona for us
Real Madrid won't buy Mbappe in the summer of 2021 due to the crisis (Le Parisien)
Ibra scores in 39, Buffon drags in 42, Ronaldo has no plans to finish. Is football really getting old?
Ziyech about who inspires him: Eden Hazard. A world class player
Source https://www.foxnews.com/us/philadelphia-police-body-camera-footage-walter-wallace-jr-shooting

Europe pushes to rescue Christmas despite sacrifice of other religions

Storytelling Total: the story of companies that survive in time

What every new mom should know about returning to work

'I feel your pain': Naomi Watts on Game of Thrones prequel cancellation

Can the Giants’ Tenuous Grasp of the N.F.C. East Hold?

'David sir was angry at Varun but vented out on me': Sara Ali Khan on 'Coolie No 1' BTS

He Was a Stick, She Was a Leaf; Together They Made History

Fraser Island, a unique Australian ecosystem, is on fire as parts of the country swelter through record heat wave

The other pandemic that we must cure

3 lessons from Stranger Things for entrepreneurs

Inside the Hat Shop: A Demo in Watercolor

The worst mistake (you always make) when investing

How Fuego Shoes is Reinventing Dance

Earthlings, It Seems, Not Aliens, Removed the Utah Monolith

The fates of millions of Americans rest on Biden's economic team

Trump Has Raised Up To $170 Million Since Election Day: Reports

Unilever is testing a four-day work week in New Zealand

Nets 2020 training camp roster outlook: The skinny on every player

Barack Obama Explains To Stephen Colbert The Satisfaction Of Being President, What A Third Term Could Have Looked Like

Study: Students falling behind in math during pandemic

Australia partners with US to develop hypersonic missiles

Ingraham: Biden's 'team of false prophets' will deliver 'ruin instead of results'

After Trump’s Lies, the Establishment’s Tripe and Self-Deception

When the Right Knew How to Organize

The fate of millions of Americans rests on Biden's economic team

It’s Time to Wield Antitrust Against the Publishing Industry

This Day in History: Dec. 1