Retro Report: How an Unsolved Mystery Changed the Way We Take Pills

How do companies regain public trust after something goes seriously wrong? We looked at how Tylenol responded after someone inexplicably spiked its pills with poison in the 1980s.Published OnSept. 16, 2018

Odds are that you have had moments of frustration trying to open new bottles of aspirin or other over-the-counter medications. Perhaps your fingernails are not up to the task of breaking the seal on the plastic wrap. Or maybe the pop-up cap is a challenge, seemingly designed to be not only childproof but also adultproof. The foil covering the lip of the bottle may defy neat tearing. Then you struggle to remove every wisp of the cotton wad standing between you and the medicine.

But odds are also good that, even if a bit annoyed, you are reassured. All those layers of protection mean you may reasonably trust that the pill you are about to pop is safe.

In 1982, someone tampered with capsules of Extra-Strength Tylenol, turning them lethal with potassium cyanide. Seven people in the Chicago area died. Copycat attacks around the country caused several more deaths.

As grim as the Tylenol deaths were, they endure as an example of how a corporation, Johnson & Johnson in this instance, took control of the calamity, came up with a strategy and, with surprising swiftness, regained trust it had lost.

“We concluded we were never going to be judged by what caused the problem,” said Alan Hilburg, a communications and branding consultant who was part of a public relations team enlisted by Johnson & Johnson. “We were always going to be judged on how we responded to it.” 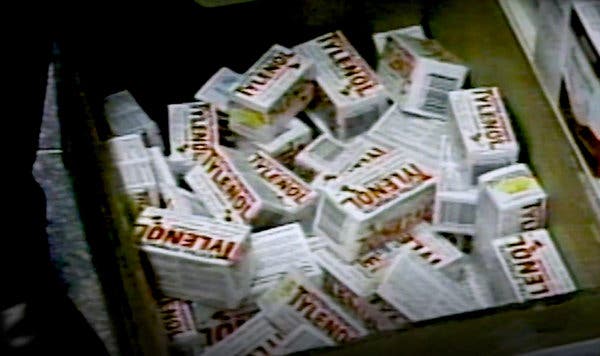 The Tylenol episode remains a textbook illustration of effective crisis management, and yet its lessons are all too often forgotten by the corporate world. One after another in recent years, companies like Equifax, Wells Fargo, United Airlines, Facebook and Toyota have fumbled their way through scandals — self-inflicted wounds in the main. What they tend to have in common are responses regarded as too slow or too grudging. Or both.

In the Tylenol case, Mary Kellerman became the first victim on the morning of Sept. 29, 1982. She was 12 years old. She had swallowed a capsule hoping to fend off a cold. Adam Janus, a postal worker, was next, a few hours later. His brother and sister-in-law, Stanley and Theresa Janus, soon died as well. Then so did Paula Prince, Mary McFarland and Mary Reiner.

Their deaths touched off waves of dread nationwide, with Americans wondering if they could trust familiar products on grocery and pharmacy shelves. “People were terrorized,” Richard Brzeczek, a former superintendent of the Chicago Police Department, recalled for Retro Report.

Investigators rapidly determined that the trouble was not in the manufacture of Tylenol. Stores were where the vulnerability lay. But what was behind the attacks? That was, and still is, a mystery.

“It made no sense,” said Tyrone C. Fahner, a former Illinois attorney general. “There was no clear and intended victim, but just anyone — anyone who happened to have the misfortune to buy a bottle of Tylenol.”

Suspicion fell on James W. Lewis, a tax consultant, who in October 1982 sent a letter to the drug manufacturer saying he would “stop the killing” if he was paid a million dollars. Arrested and then convicted, Mr. Lewis spent 12 years in federal prison for extortion.

No case, however, was built against him for the deaths. (Eight years ago, he wrote a self-published novel somewhat brazenly titled “Poison!: The Doctor’s Dilemma.”) Other men also fell under suspicion, but those investigations reached dead ends.

It became clear, though, that the medication itself was fine. “Tylenol works,” Mr. Hilburg told Retro Report. “Trust was lost in the packaging because the packaging had enabled the poison, the cyanide, to be entered into the medicine.”

The company considered renaming Tylenol, a word that incorporates some of the letters from 4- (aceTYLamino) phENOL, a chemical name for acetaminophen, the drug’s active ingredient. But a name change was rejected.

Instead, a mere six weeks after the crisis flared, the company offered a different solution, a new bottle with the sorts of safety elements now familiar (if at times exasperating) to every shopper: cotton wad, foil seal, childproof cap, plastic strip. Capsules began to be replaced with caplets the following year.

Johnson & Johnson was viewed as an exemplar of corporate responsibility, and enjoyed what some people described as the greatest comeback since Lazarus. Nowadays, all sorts of products come in containers deemed tamper-proof, or at least tamper-evident, meaning that consumers can readily tell if a seal has been broken or something else is amiss.

Other companies absorbed the moral of the Tylenol story. One commonly cited example is Odwalla, a California-based juice producer. In 1996, a 16-month-old girl died and 70 others were sickened after drinking Odwalla apple juice that was found to have been contaminated with E. coli bacteria. The company immediately recalled all its products containing apple or carrot juice. It had to pay millions to settle lawsuits and cover a federal government fine. But it quickly changed its safety procedures, and was back selling apple juice two months after the crisis began.

As recent experience amply shows, not every business has proved so sure-footed. Wells Fargo was slow to acknowledge that its sales culture led employees to create millions of phony checking and savings accounts. Equifax, the consumer credit reporting agency, let a couple of months pass before publicly acknowledging that hackers had gained access to the personal data of tens of millions of customers.

Mark Zuckerberg of Facebook took some time before publicly accepting that his creation was used malevolently in the 2016 presidential election. Toyota plodded along even amid mass recalls after discovering that jammed accelerators had caused driver deaths. United Airlines’ apology struck many people as halfhearted after a passenger was roughly dragged from a plane last year simply for declining to give up his seat on an overbooked flight.

Even Johnson & Johnson has stumbled. In 2010, it was revealed that the company had secretly bought up defective drugs without informing consumers or government regulators. A year earlier, in a “phantom recall,” it had sent agents pretending to be ordinary shoppers to snap up some 88,000 problematic Motrin tablets from store shelves.

It was a far cry from 1982, as Mr. Hilburg well knew. “We’re seeing too many examples,” he said, of companies letting situations worsen “simply because they forgot the lesson that you’re going not to be judged by what caused the crisis but by how you respond.”

After cyanide-tainted Tylenol Extra Strength capsules were blamed for the deaths of seven people in the Chicago area in 1982, the McNeil Consumer Products division of Johnson & Johnson undertook one of the largest recalls ever ordered in the pharmaceutical industry. More than 100 state and federal agents fanned out across the Chicago metropolitan area in a painstaking attempt to reconstruct the route of the poisoned capsules of the nation’s largest selling over-the-counter pain reliever, but no culprit was ever identified. In 1983, James W. Lewis was found guilty of extortion in connection with the case, but he has denied involvement in the tampering. Examples of the way other companies have confronted crises include Odwalla, found guilty and fined over apple juice tainting; Equifax, which faced government investigations and huge expenses after a major data breach; Wells Fargo, fined $185 million for creating fraudulent credit card accounts; Facebook, over its role in Russia’s interference in the 2016 presidential election; and United Airlines, after a passenger was dragged off an overbooked plane.

The video with this article is part of a documentary series presented by The New York Times. The video project was started with a grant from Christopher Buck. Retro Report, led by Kyra Darnton, is a nonprofit video news organization that aims to provide a thoughtful counterweight to today’s 24/7 news cycle. Suggestions for future episodes are welcome in the comments.

Atalanta controlled the ball for 8 minutes and 11 seconds before the first goal against Juventus
Jovic will be able to play with Villarreal if the third test for the virus is negative
Hodgson on Zaa threats: He did the right thing when he let people know. There is no excuse for this
Setien on Messi's rest: Of course, he needs it. But the score in the match against Valladolid was too slippery
Immobile – the fans of Lazio: Some people seem to have too short a memory. Leave my family alone
Holand was kicked out of a nightclub in Norway
Zinedine Zidane: real is real. The most important club in history
Source https://www.nytimes.com/2018/09/16/us/tylenol-acetaminophen-deaths.html?partner=rss&emc=rss

Dr. Jon LaPook on the importance of wearing face masks

A Latino family lost a father to COVID-19. The obituary blamed the 'carelessness of politicians.'

Pawan Kalyan to Amitabh Bachchan: 'Pained to know you and Abhishek have tested positive for coronavirus'

Sessions says he's fine with Trump. Is that enough for Alabamians?

Building bridges to combat COVID-19 in communities of color

Florida man crashes into church, sets it on fire with parishioners inside, sheriff says

How old is your dog? New equation shows how to calculate its real age

The inside story of how California failed mass coronavirus testing

The Sunday Read: ‘The Decameron Project’

Why did liberals win so many cases before a conservative Supreme Court?

From street corners to concert halls: A cappella harnesses the power of unaccompanied voices

I was forced to use all my sick leave on furlough, so what happens when I return to work?

The Latest: Cases of COVID-19 surging in South Africa

'Sweat is not possible everywhere in the world': Bhuvneshwar

Trump cranks up the volume on schools

Trump on private border wall segment: ‘It was only done to make me look bad’

“Usually, trans women are side characters”

Rijiju to hold 2-day video conference with sports ministers of all states, UTs

Record heat possible from California to Florida on Sunday

Get ready for an awful earnings season

Record heat possible from California to Alabama on Sunday

San Gabriel Mission, a symbol of faith, history and oppression, is badly damaged by fire

Christen Limbaugh Bloom: The secret to a daily Bible discipline is not what you'd expect

This Wearable Uses 'Bioimpedance' to Track Your Health

Griezmann likely to miss rest of Spanish league with injury

Trump, Biden try to outdo each other on tough talk on China

Thomas Sowell says concept of systemic racism 'has no meaning,' warns US could reach 'point of no return'

How 6 Problem-Solvers Tackled Pandemic Challenges In Their Neighborhoods

Churches amid the pandemic: Some outbreaks, many challenges

A year after leaving prison, he has a job, a fiancée and maybe only a week of freedom

You Haven't Heard The Last Of Iowa This Election Cycle

What We’ve Learned from 101 Years of American Unrest

What Donald Trump Could Learn From Playing Poker

Mexico City was once the realm of the mammoth

The Week in Business: What a Biden Economy Could Look Like

Tarte Flash Sale: Save 50% Off on Bestselling Foundations

Three teachers who shared a classroom got coronavirus. One of them died