Review: Andrea Riseborough is a master of murder tech in Brandon Cronenberg's 'Possessor'

The Times is committed to reviewing theatrical film releases during the COVID-19 pandemic. Because moviegoing carries risks during this time, we remind readers to follow health and safety guidelines as outlined by the Centers for Disease Control and Prevention and local health officials.

In Andrea Riseborough’s best screen performances — in “Nancy,” for example, and the TV series “ZeroZeroZero” — she projects a particular blend of fragility and mystery. She’s vulnerable enough to be a sympathetic character, but eerily blank enough to suggest she might, deep down, be dangerous.

Her lead performance in the science-fiction/horror hybrid “Possessor” is peak Riseborough. In writer-director Brandon Cronenberg’s violent, visionary film, she plays Tasya Vos, a ruthless assassin who works for a shadowy organization with cutting-edge murder tech, allowing her to slip into other people’s minds. She does her killing while controlling their bodies.

After a splashy opening sequence — a tense and visually dynamic depiction of one particularly bloody job — Cronenberg slows the pace of “Possessor” way down to show exactly how Tasya works. Her next assignment is to take out a powerful CEO, John Parse (Sean Bean). Her weapon of choice? Parse’s future son-in-law, Colin Tate (Christopher Abbott), a miserable schlub who spends his days in a data mine, tagging images in internet videos.

Cronenberg has a lot on his mind here and tries to squeeze as much of it as he can into the picture. “Possessor” is partly about the art of performance, as Tasya — working like a Method actor — does her best not just to inhabit other humans but to understand the lives attached to them. In the process, she’s begun drifting from her own life. She’s haunted by other people’s memories and so alienated from herself that she has to rehearse what normal folks say before she returns home to her husband and son. 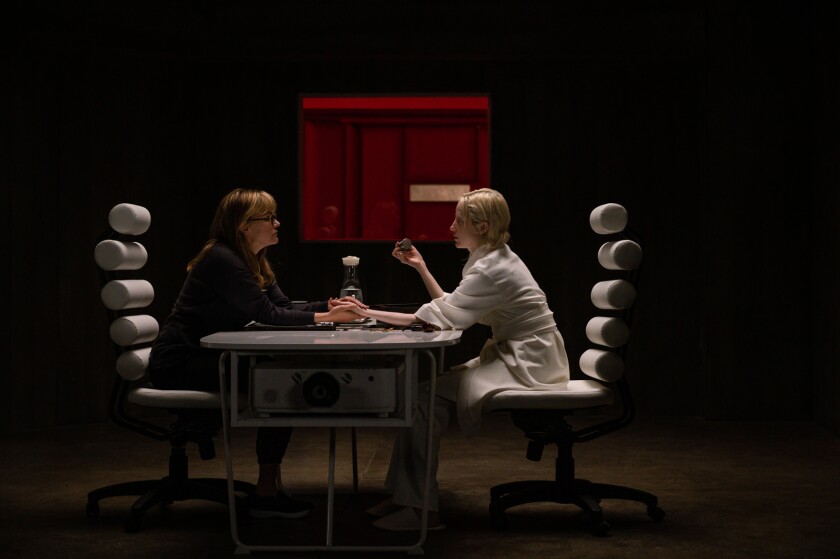 Like his father, David, Brandon Cronenberg is also interested in how our fundamental humanity can be changed by technology — whether it’s Tasya sneaking into other brains or Colin watching one video after another for hours. In classic Cronenberg fashion, “Possessor” develops into full-on body-horror, with characters being impaled and flayed, and Tasya at one point literally slipping into someone else’s skin. (Consider this a warning: The squeamish should stay away.)

The movie drifts a bit too far into abstraction in its final third, as Cronenberg loses interest in what had been a solidly effective corporate espionage plot and instead starts emphasizing Tasya’s weakening grip on reality. By the end, “Possessor” becomes a succession of mind-bending and stomach-turning images in which it’s hard to tell who’s really behind the eyes of the people we’re seeing on the screen, or if what they’re doing is actually happening.

But Riseborough (and Abbott, for that matter) commands attention even when the action’s confusing. Cronenberg has a lot of high-minded ideas, but he grounds them in human behavior and has found the right humans to tell his story. Amid all the severed jugulars and gouged-out eyeballs, Cronenberg can always cut to Riseborough, who looks as wounded as the twitching corpses strewn about her.

Sports Director of Khimki about 2:0 with Rostov: We proved that we are a team and can win on the road
Jaka defeated Arsenal and Leicester did not create anything except the goal. We will try to take points from Manchester United
Pirlo about 1:1 with Verona: Juve do not need a slap in the face to Wake up and play intensely
Everton and Liverpool in the top 2 at the end of the round in the Premier League for the first time in 27 years
Arteta about 0:1 with Leicester: I Don't know why the hell our goal was canceled. It is difficult to create space when 10 people are sitting behind the ball line
Rodgers on 1-0 with Arsenal: Leicester deserved to win. Vardy is a world-class player
Juve without Ronaldo could not beat Verona and Crotone in Serie A
Source https://www.latimes.com/entertainment-arts/movies/story/2020-10-01/review-possessor-andrea-riseborough

AOC tells Jane Fonda being Trump’s ‘public enemy No. 1’ is a good thing

Europe is More Vulnerable to Big Tech Censorship than America

Americans Must Render Judgment Against Joe Biden At The Polls

Clayton Kershaw's performance enough for Dodgers win in Game 5, one victory away from World Series

Trump team just announced its surrender to the pandemic

Atlanta rapper Silento charged with driving 143 mph on I-85

Sofia Vergara reunites with handful of 'Modern Family' co-stars: 'So much fun'

North Dakota to use coronavirus aid for fracking, education

Gigi Hadid encourages fans to vote while showing off her post-baby body: 'I’m proud of you'

Buccaneers' Bruce Arians on reported Antonio Brown signing: 'Tom [Brady] had nothing to do with this'

Steelers show their flaws on way to staying perfect

California's dire coronavirus prediction was wrong, hospitalizations went down instead

Sunday Night Owls: Many who see Trump as fascist ignore happenings in Hong Kong and Xinjiang

‘Tough’ Jets defense isn’t blameless even with offense a mess

Curfew enacted in El Paso as hospitals and ICUs near capacity

One of the Parkland shooting survivors is participating in an online rally focused on youth turnout.

With a little more than a week until Election Day, Trump and Biden make closing pitches on ‘60 Minutes.’

Cam Newton confident he can recover from dismal outing

Harris lists out 'racist' actions by Trump in '60 minutes' interview: 'It all speaks for itself'

Biden: Trump's view of suburbs is 'not who we are'

The Fox News president and several anchors were advised to quarantine after possible virus exposure.

Whether Trump or Biden wins in November, Beijing will be hoping to reset the US-China relationship

‘An End to the Chapter of Dictatorship’: Chileans Vote to Draft a New Constitution

Fights Erupt During ‘Jews for Trump’ Rally in Manhattan

Kumail Nanjiani Expresses His Concerns For Surge In COVID-19 Cases: “I Feel Hopeless And Helpless”

Push for Puerto Rico statehood has myriad political implications, including for DC area

Donald Trump Griped About ’60 Minutes’ Interview, But The Show Got The Last Word

It just keeps getting sadder for Sam Darnold

Groundwork for US lawsuit vs. Google goes back to 2012