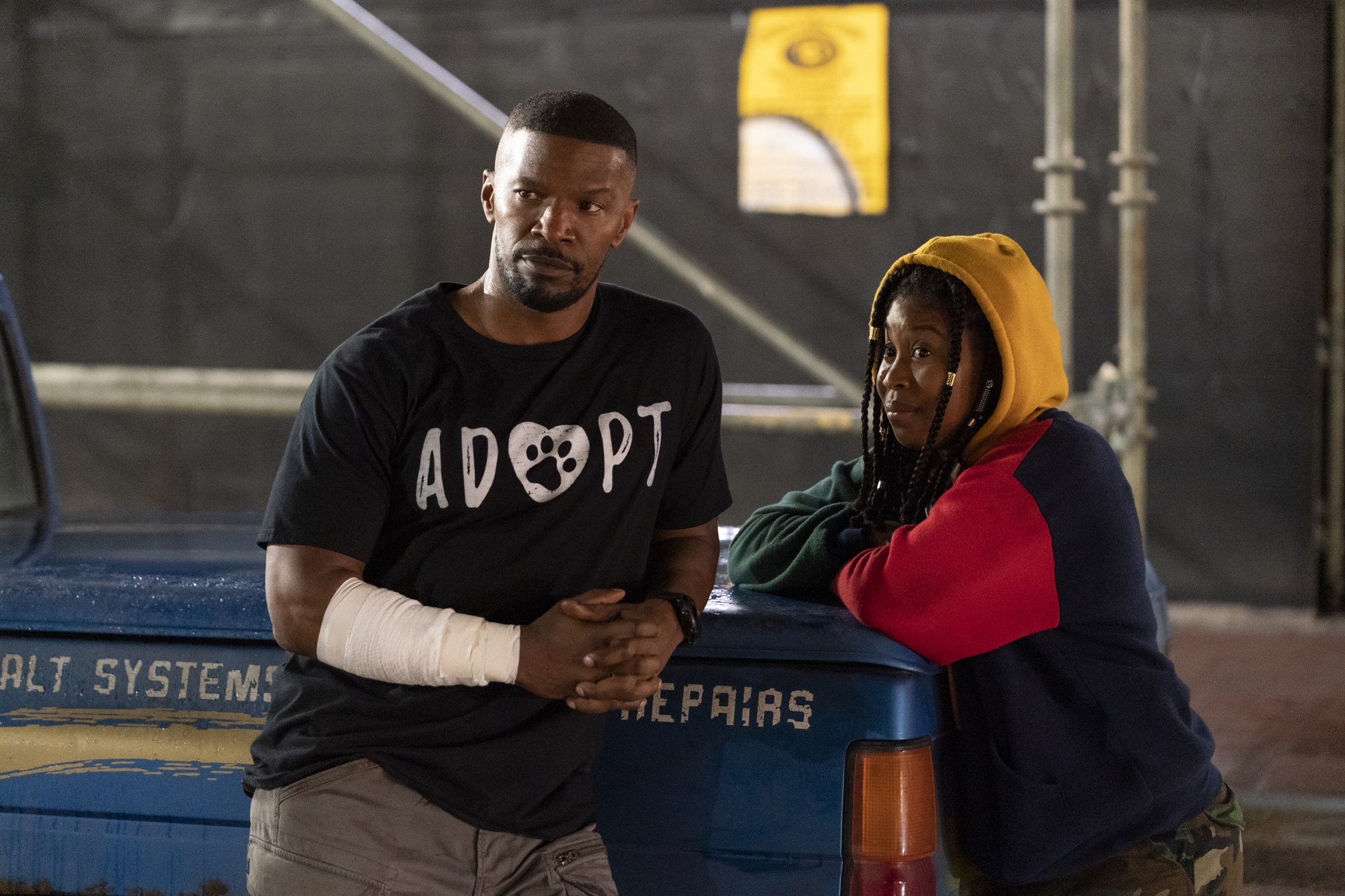 This image released by Netflix shows Jamie Foxx, left, and Dominique Fishback in a scene from “Project Power.” The film, streaming Friday, imagines a world where a pill can give temporary superpowers. (Skip Bolen/Netflix via AP)

Hollywood has become addicted to the superhero genre over the past 25 years.

So, you might be skeptical that a new Netflix original could break any new ground.

And yet, “Project Power” does just that with a unique premise where humans take pills to gain super powers. Rather than a select few mutants boasting supernatural abilities, this film suggests that we all have a supernatural ability just waiting to be unlocked.

It could be good, it could be bad, or it could make you blow up right on the spot. Is it worth it?

Set on the streets of New Orleans, the story follows teenage drug dealer Robin (Dominique Fishback), who zones out in class by day and pushes the pill by night. Soon, she teams with local cop Frank (Joseph Gordon-Levitt) and military vet Art (Jamie Foxx) to infiltrate the underworld group who created the pill and shut it down.

You may recognize Fishback from “The Deuce” (2017) and “The Hate You Give” (2018). In “Project Power,” it’s hard to sympathize with her drug dealer until we learn her motives — her mom has diabetes and can’t afford health insurance. She also has a passion for rapping, which might feel cliche except that her freestyle rhymes flow.

She is urged to stay in school by Foxx, who is similarly misunderstood by the police. He may walk and talk like Denzel in “Training Day” (2001), navigating an underworld of criminal figures like Newt (Machine Gun Kelly) and Biggie (Rodrigo Santoro), but his character is given a clear mission to find his daughter, who he lost in flashbacks.

The only main character that isn’t given much of a backstory is Frank, other than trying to impress his superior Captain Crane (Courtney B. Vance). Wearing a Saints jersey and pedaling like “Premium Rush” (2012), the baby-faced Gordon-Levitt is now a seasoned cop, reminding us that “Third Rock from the Sun” was 24 years ago.

Interweaving this trio of characters is screenwriter Mattson Tomlin, who will co-write “The Batman” (2021). His larger goal is an allegory for the crack epidemic or opioid crisis, making the “rules of magic” clear for the pill: (1) we all have a hidden power, (2) we don’t know what it is, and (3) it only lasts five minutes, so set your stopwatch.

Beyond that, Tomlin taps into evolutionary themes that tie the powers to animal feats of nature like amphibians turning broken bones into weapons or reptiles controlling their own body temperatures. The pills simply help humans access the next phase of evolution, so it’s no coincidence that they’re transported on a ship called Genesis.

Helming it all are co-directors Henry Joost and Ariel Schulman, who made the Sundance feature documentary “Catfish” (2010) and the South By Southwest short doc “A Brief History of John Baldessari” (2012) before their horror flick “Paranormal Activity 3” (2011) and their upcoming video game adaptation of “Mega Man.”

In “Project Power,” they deliver a more tasteful alternative to the disappointingly crude Netflix crime comedy “Coffee & Kareem” (2020), which was too raunchy for its own good. “Project Power” is technically Rated R, but it’s closer to PG-13. Parents should feel comfortable letting teenagers watch it with limited profanity and violence.

For example, the most harrowing scene unfolds inside a climate-controlled tank, as the camera peers out through frosted glass that essentially distorts the deadly chaos happening outside. Not only is this a slick stylistic choice, but it also simultaneously puts us in the shoes of the character inside the tank, watching the events unfold in horror.

In the end, the film suffers in comparison to HBO’s “Watchmen” (2019), which is about to sweep the Emmys next month, but it’s not a bad sci-fi action movie on its own terms. If you enjoy this, be sure to check out the Bruce Dern gem “Freaks” (2018), which began trending on Netflix at the beginning of quarantine in March.

“Project Power” isn’t an instant classic, but it’s a rush that offers your superpower fix.

Get breaking news and daily headlines delivered to your email inbox by signing up here.

© 2020 WTOP. All Rights Reserved. This website is not intended for users located within the European Economic Area.

Pep Guardiola: I have to earn a new contract. Need to win
Barcelona will sell Semed in Wolverhampton
PSG have started talks about Dele alli's transfer
Real Madrid will arrive late in San Sebastian. The flight was delayed due to a plane crash
Rubin Slutsk scored a move: four wins in five matches. How will they play Spartak?
Guardiola on city: Working with these players at this club is a joy. The team is in a great mood
Mourinho wants to sign Lingard for Tottenham
Source https://wtop.com/entertainment/2020/08/review-project-power-flips-superhero-genre-into-action-packed-drug-allegory/

If US Election Winds up in Supreme Court, Ginsburg’s Death Will Loom Large

What Anurag Kashyap did to Payal Ghosh is a common practice in Bullywood: Kangana Ranaut

Wildfires, coronavirus and an earthquake collided for California's terrible week

Majority of Americans report no confidence in Trump to confirm vaccine safety: POLL

Trump's race-baiting might come at a cost to his economy

The female face of Belarusian protests: How women rose against Lukashenko

For musicians, the stigma of 'pay to play' has eased in light of the pandemic

Wildfires, Droughts, Pandemics. Is this Our Future? How to Build a Safer World.

The Week in Business: TikTok’s Last-Minute Save

What Trump Is Missing About American History

Lego Makes a Hundred Billion Bricks a Year. CEO Niels Christiansen on Why They’re Now More Important Than Ever

Leicester signs winger Cengiz Under on loan from Roma

What to Watch For at the 2020 Emmy Awards

These Confederate statues were removed. But where did they go?

Why it could be a Biden blowout in November

Mahindra picks XUV300 for road safety drive; pledges to save 1mn lives by 2027

Iran dismisses US efforts at UN sanctions as currency drops

Ruckus in Rajya Sabha over YSRCP member's remark against Congress

2020 Emmys: Everything you need to know before the award show

Couple's wedding RSVP allegedly offers better meals for guests who give expensive gifts: 'That is horrific'

Homes That Sold for Around $1.5 Million

The Pros and Cons of Being a Hammerhead Shark

Our Poll* Shows Close Race for Senate in Montana

How an Oregon Wildfire Became One of the Most Destructive

Jets vs. 49ers: Preview, predictions, what to watch for

Anti-Trump professor's coronavirus wish for president's supporters gets her suspended

Climate change has inflicted more damage on the U.S. military than Iranian missiles

'A crisis of humanity': Migrants take on treacherous journey from France to Britain

Matthew Wolff, 21, set to make golfing history as he seizes the lead at the US Open

Joe Judge: Cordarrelle Patterson one of best kick returners ever

Patrick Reed plummets down US Open leaderboard: ‘It was brutal’

As coronavirus skyrocketed in the US, so did stress and depression

As coronavirus skyrocketed in the US, so did depression

Taj Mahal, Agra Fort to reopen from Monday after 6 months

Deivi Garcia excited to pitch where ‘legend’ Pedro Martinez did

At least 40 rounds were fired during shooting that left two dead at a party in New York, police say

How To Watch Tonight’s Primetime Emmy Awards Online & On TV

A happy ending after homeless woman's story featured on TV

How One District Got Its Students Back Into Classrooms

He did not want a sixth daughter, so he ripped pregnant wife's abdomen open