The country that introduced the world to “hygge” now has another term for us: “samfundssind.”

Last year Americans went wild for hygge, which encompasses all things cozy and comforting — but the likely 2020 “word of the year” in Denmark is “samfundssind" — which the Danish Language Council defines as “putting the concern of society higher than one’s own interests.” More loosely translated as “community spirit” or “social mindedness” according to the BBC. 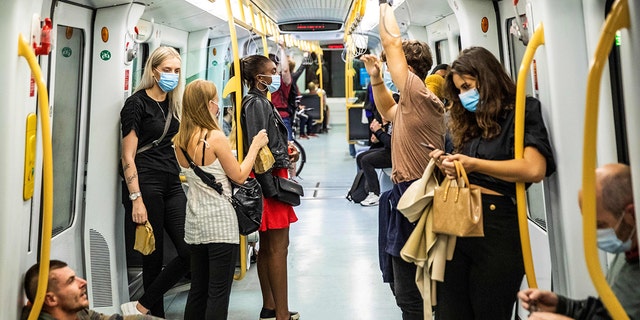 The term was more recently used in March by Danish Prime Minister Mette Frederiksen  to describe the social-mindedness of his country's citizens. (Olafur Steinar Gestsson/Ritzau Scanpix/AFP via Getty Images)

The term was used in March by Danish Prime Minister Mette Frederiksen, who noted at a press conference: “We have to stand together by keeping our distance… We need community spirit. We need help. I would like to thank … all who have so far shown that this is exactly what we have in Denmark — samfundssind.”

And the Danish people and companies responded immediately, with private companies getting medical equipment to help alleviate some of the pressure on healthcare services, part of the Denmark Helping Denmark campaign, prompting the  Danish Medicines Agency’s Director General Thomas Senderovitz to commend them, saying the response showed “incredible goodwill and community spirit,” according to the BBC.

Meanwhile, the Lego factory manufactured visors for healthcare workers; the amusement park Tivoli Gardens turned into a temporary kindergarten; and double Michelin-starred restaurant, Alchemist, began cooking pasta for 12 homeless shelters in Copenhagen. As the BBC notes that while the word is now used on social media as a hashtag to highlight kind acts, “perhaps most importantly, everyday people showed community spirit by following the rules.”

This article was originally published with The New York Post.

Jovic has recovered from the coronavirus and can play against Sevilla on Saturday
Paredes on Messi at PSG: I Hope so. Welcome Leo with open arms
Trent on the best match of his career: 3-0 with Manchester City in the Champions League. In these games, you can't even communicate with your partners
Pele wrote an appeal to Maradona: I love you, Diego. We have been compared all our lives, but you are incomparable
Until the 65th minute, Manchester United were very good. And then Tuchel used a favorite technique of Solskjaer (DSLR) against him
I would sell Messi in the summer. Economically, it was desirable. Acting President of Barca Tusquets on the crisis
Lopetegui about 0:4 with Chelsea: They deserved to win, but the gap in the score was excessive
Source https://www.foxnews.com/lifestyle/samfundssind-danish-term-sums-up-a-specific-approach-to-coronavirus-outbreak

Cartoon: Lucky Ducky and the return of the Deficit Hawk!

This $6 kit has everything you need to travel safely

US Employers Could Mandate a COVID-19 Vaccine, but Are Unlikely To Do So -Experts

WHO Looks at Possible ‘E-Vaccination Certificates’ for Travel

How So Much Pandemic Aid Went to Just a Few Businesses

Obama, Bush, Clinton Say They're Willing To Get Coronavirus Vaccine On Camera

How much worse is the Bay Area's current COVID-19 surge than the summer surge?

Dharampal Gulati passes away: An awe-inspiring journey of 'MDH masala king' to 'dadaji'

Michael Schumacher's son Mick to race for Haas F1 in 2021

Ahead of Tenet's release, Christopher Nolan has a message for all his Indian fans

No. 2 Baylor uses stout defense to get past No. 5 Illinois

Missouri builds big lead, holds off No. 21 Oregon in Omaha

China hits out at US after report of new visa restrictions

Georgia squares off against Jacksonville

UTRGV battles Our Lady of the Lake

Pacific goes up against Westmont

Winthrop goes up against Duquesne

FAMU squares up against USF

Sexual Abuse in the Boy Scouts: 'Something Terrible Has Happened'

Migrant girl fled to the U.S. fearing sexual abuse but was expelled

The S.U.V.-ification of Everything Comes to Classic British Marques

Holiday Gifts for the Outdoorsy 2020

Column: Rahm Emanuel belongs in America’s political past, not in Joe Biden’s Cabinet

Help! My Wife Died Last Year. My Neighbor Won’t Stop Hitting on Me.

Georgia runoffs are a must-win for the Democrats, and for Biden

Looking for a good read? Amazon releases ‘best books of the year’ list

Ask a Teacher: My Son’s Beloved Teacher Was Switched to a New Class

‘Sign o’ the Times’: How Prince Wrote and Recorded a Classic Song

Andalusian Industry Unites in the Face of Pandemic