Edgar Hernandez fumbled with his keys as he tried to unlock the gates to the San Gabriel Mission cemetery just before 7 a.m. Sunday Mass.

The 38-year-old kept looking across the parking lot to the ruins of one of the oldest Catholic houses of worship in Southern California. The day before, fire had engulfed the 215-year-old mission church. The roof was destroyed; the pews, incinerated. Only the altar and adobe walls survived. Parishioners attend Mass on Sunday at a mission chapel that was undamaged from the fire the day before.

Sunday services went on as usual in a nearby chapel untouched by the fire, but the acrid smell of burnt wood filled the morning air. That’s not why Hernandez choked up.

“I baptized my kids at that church,” said the facility’s maintenance director. “I got married here,” he said, pointing to the chapel. “One day you come, and everything’s fine. The next day, everyone is hurting.”

Pain resonated around the valley that bears San Gabriel’s name in the wake of the fire, which local, regional and national officials are investigating. It manifested in ways that told multiple stories about the mission, which was founded in 1771.

For many, this was their neighborhood parish, where generations of the same family went to weekly Mass, baptized children and said goodbye to loved ones.

“You don’t really feel it until you see it in person, and then it hits home,” said Michael Arden, 50, a lifelong San Gabriel resident, who walked around the mission in construction clothes while holding a cup of coffee. “It’s going to mean that much more when it reopens.” Nick Delgado, 80, of El Monte, who grew up in San Gabriel and spent much of his life at the mission, visited on Sunday.

For others, the mission was a place that embraced them when few others would.

Altagracia Diaz Gamboa still remembers the welcome her family felt when they migrated from the Mexican state of Zacatecas to San Gabriel in 1968, when she was a preteen. “People greeted us with open arms,” said the 64-year-old, who held her wedding in the old mission church and saw her daughter marry there as well. “It’s always been like this. So much love is in there. The disaster is so tragic.”

Still others felt it was a place of horror: where Native Americans toiled under brutally domineering Spaniards and were nearly exterminated.

“I get why people are angry at [St. Junipero] Serra,” said an elderly woman who refused to give her name. Earlier in the week, a statue of the founder of the California mission system was moved to a private garden within the San Gabriel compound after activists tore down a similar monument near Olvera Street. “We should tell the truth about him.”

Even non-Catholics felt a connection to the building.

Sarah Zhi ducked under yellow caution tape that blocked off Mission Drive as she took her daily jog. Nearby, workers swept up ashes that blackened the sidewalk and measured the church’s front doors in order to board them up with plywood.

“It’s a Mexican church, but people are very nice there,” said the Chinese immigrant, who has lived in the United States for six years. She once went in with a friend and found it “beautiful.”

Robert Zhu has lived in San Gabriel for 30 years but has never stepped into the church.

“I read online that [the mission] was 249 years old,” he said, as a woodpecker banged on the windowsill of the fenced-off museum, which didn’t suffer any damage. “You can’t even imagine what was around back then. It’s important for people to realize that.”

People walked around the mission Sunday as if in a daze. Gone were the tears of the previous day, when dozens prayed in front of the then-smoldering structure. On this morning, the faithful snapped photos of the bas-relief sculptures outside the chapel’s entrance that told the story of the mission’s founding. They touched the statue of St. Anthony Claret, the founding father of the Claretian missionaries that now run the San Gabriel Mission. They gazed at a grapevine near the gift shop, its fruit weeks away from ripening. 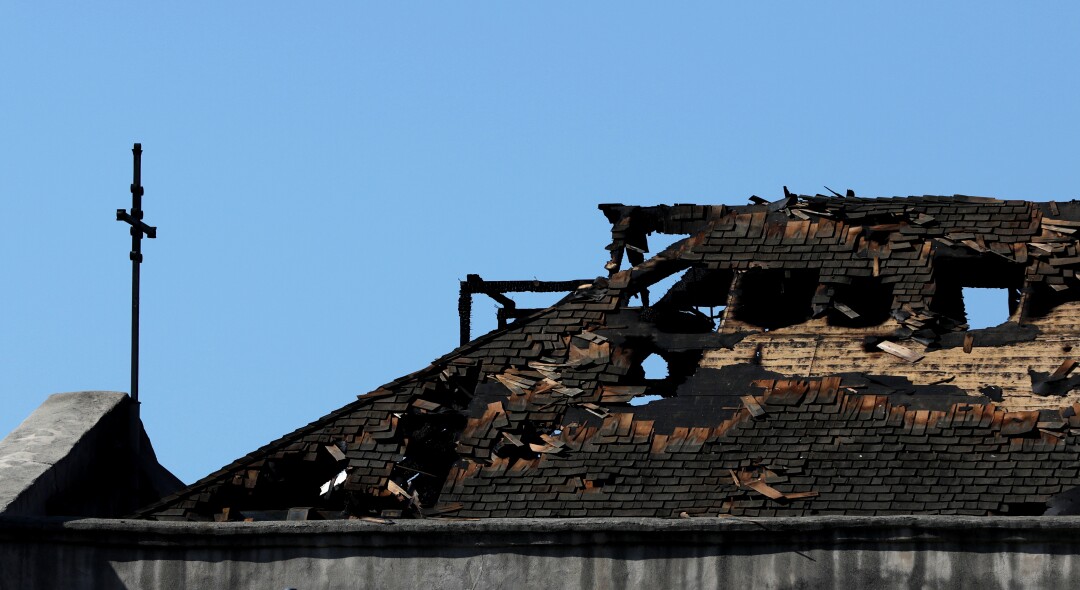 The roof was heavily damaged in Saturday’s fire.

It’s as if they were reminding themselves of the adage “ashes to ashes, dust to dust.”

“This isn’t just a local parish,” said 58-year-old Erlinda Romo, who volunteered at the mission before the COVID-19 pandemic shut it down in March. “It’s a regional parish. There’s a connection that never leaves you. And like the phoenix, we’ll rise again.”

Long overlooked in the solar system of Catholic missions in Southern California — it’s not as famous as its San Juan Capistrano counterpart, as picturesque as the ones in Ventura and Santa Barbara, or as quaint as Mission San Fernando — the San Gabriel Mission had earned a reappraisal in recent years from academics and even putative adversaries, exacerbating the emotions felt in the wake of the inferno.

Hughes has taken Mexican conservationists to marvel at the mission and its collection of arts and artifacts, only to see them shake their heads at its shabby upkeep and lack of access to the descendants of the Tongva people who built San Gabriel.

“One literally grabbed my arms by the fingernails and said, ‘It’s a treasure that’s being totally disregarded,’” Hughes said. “I just hope that this most recent incident wakes up the Archdiocese [of Los Angeles] to this.”

Deborah A. Miranda, an English professor at Washington and Lee University in Lexington, Va., is working on a project in which she’s visiting every California mission to “listen” and tell its story. For her, Mission San Gabriel imparts “a sense of fear and fortress. It’s built like a place to keep away the invading hordes.” A member of the Monterey-based Ohlone Costanoan Esselen Nation, Miranda says many of the indigenous people she has talked to about the San Gabriel Mission fire feel conflicted.

“They feel exultant, and they feel this deep grief,” she said. “These are not positive places. But without them, we don’t have this proof that human beings could do this to other people.”

Carribean Fragoza, 39, co-director of South El Monte Arts Posse, said she grew up in the San Gabriel Valley thinking “that the mission was some great thing that everyone admired. But as I learned more about it, the more disenchanted I became with it.”

She’s no longer so fond of it, save for the story of the Tongva medicine woman Toypurina. In 1785, Spanish authorities arrested Toypurina just as she was about to lead an insurrection against Mission San Gabriel. Murals in her honor now dot Southern California, although none are near the mission.

“She really became a symbol that represented that resistance was possible,” said Fragoza, who included Toypurina’s story in a recently published collection of essays about El Monte that she co-edited. “She represents the stories that don’t get told.”

Fragoza hoped the fire might inspire a moment of reckoning for anyone connected to the mission, “because there’s still a lot of people who love it.”

That spirit of having roots was the theme for the 7 a.m. Mass held in San Gabriel’s chapel by Pastor John Molyneux. The Gospel for the day: the Parable of the Sower, in which Jesus taught disciples the importance of planting seeds in good soil so they would root well and yield their bounty by a hundredfold.

“Some of us are sad,” Molyneux told parishioners, who were still struggling to adapt to the other recent disaster in their lives: the coronavirus.

Masses had restarted just a couple of weeks ago and remain capped at 100. Masks are mandatory, and the musical director pleaded with churchgoers to “sing silently.” They sat in every other pew; to their side, the marble floors were marked with blue tape every six feet so people could practice social distancing during the Eucharist.

“Some of us are grieving,” Molyneux preached. “Some of us are angry. These are the right emotions for you today. However … we gather as resurrected people.” Masses resumed at the mission just a couple of weeks ago following coronavirus closures.

In a couple of hours, Los Angeles Archbishop José Gómez would lead a special Mass. But now, Molyneux wanted to remind his flock of the mission’s building material.

“Adobe gets stronger after intense heat,” he said with a wearied smile. “I love that image. We’ll come out of this stronger.”

Juventus sacked Sarri (Nicolo Skira)
Messi sleeps on an anti-coronavirus mattress. The tissue is coated with nanoparticles that destroy the virus
Andrea Agnelli: Ronaldo will stay at Juventus. He's the mainstay of the club
Mbappe got into PSG's yawn for the match with Atalanta in the Champions League
Guardiola again played against Madrid without strikers. Zidane did not find an answer
Gattuso on the match with Barca: Napoli will climb Everest
Lampard about the game with Bayern Munich: the History of the games, when everything changed. Chelsea needs to be trusted
Source https://www.latimes.com/california/story/2020-07-13/san-gabriel-mission-fire-morning-mass

This Clever App Aims to Make Your Business Successful on Instagram

California to towns defying the COVID-19 shutdown: No cash for you

Superheroes abandoned us during the pandemic. Will they still matter afterward?

Help! I Think I’m in Love With My Brother’s Wife.

Cori Bush’s victory signals the return of the protester-politician

Why do dogs drool?

India allows entry of OCI cardholders for US, UK and selected countries

Hamilton fastest ahead of F1 qualifying at Silverstone

US Marks 160,000 COVID-19 Deaths as Relief Talks Fail in Washington

$1.6M hideaway on Lake Lapeer stuns with views of shore and nature

Trump wants to cut mail-in voting. The Republican machine is helping him.

2 Out Of 3 Churchgoers: It's Safe To Resume In-Person Worship

Opinion | The NRA Might Be Weakened. Gun Rights Voters Are Not.

Southern Baptists confront the church's history of racism and slaveholding. For some members, it's not enough.

Johnny 'Joey' Jones: I marked my 'Alive Day' this week, 10 years after losing my legs, and want to share this

Meow Wolf was set to transform themed entertainment in Vegas and beyond. Then came the pandemic

The Latest: Pakistan to allow all international flights

What is a 'table-top runway', the site of deadly Air India plane crash in Kozhikode

What is behind Gleyber Torres Yankees struggles

After Biden's comments on Black diversity, some worry blunders could impact support

Gaza students back to school with few virus safety measures

Michigan schools, parents have tough choice to make — and time is running out

Do esports have camera operators? Sort of, but they get yelled at more

Why Giants’ Saquon Barkley decided not to opt out of season

They thought COVID-19 was a hoax, until they fell ill

Did Columbus 'discover' America? Teachers re-examine how history is taught

Jeimer Candelario showed up when the Detroit Tigers needed him most

Will It Ever Really Be the Year of the Woman?

Lions' Jamie Collins explains his versatility and production: 'My stats is through the roof'

Black at U.T., and Beyond

Column: Four years after he was shot, Tavon Tanner’s family is grateful for his life — and for the two detectives helping him get to high school

The Riches of This Land

17 Books to Check Out Before the End of Summer