An 18-year-old Washington man is wanted on a first-degree murder charge in connection with the shooting death of another teen in Seattle's former Capitol Hill Organized Protest (CHOP) zone.

According to investigators, police identified Marcel Levon Long as the suspect within a day of the June 20 slaying, but they have not tracked him down. He is believed to have fled the state, according to the King County Prosecuting Attorney's Office.

Anderson then tries to leave, investigators said. Other people in the CHOP, the heart of the city's protests, tried to intervene, but Long kept following Anderson.

The two may have been involved in a feud stretching back as far as last year, one witness told police. 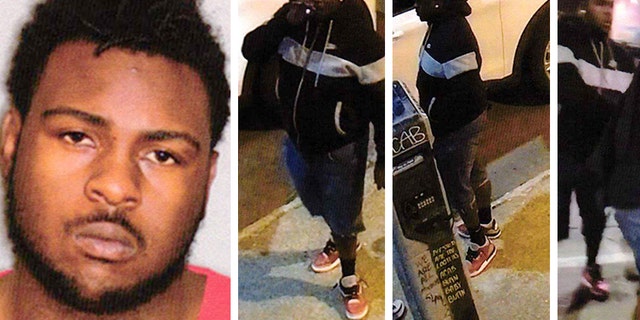 On the left is a portrait of suspect Marcel Levon Long. The three images on the right show a man who appears in surveillance video shooting a teenage victim. (Courtesy: King County Prosecuting Attorney's Office)

The attacker caught up with the victim and they exchanged punches, according to a police affidavit. During the fight, Anderson moves out of camera range, and Long is accused of drawing a gun and firing at least twice at “a downward angle.”

At that point, although off camera, police said they believe Anderson was “down on the sidewalk with gunshot wounds to his body.”

Police said that responding officers could not reach the victim on the night of the crime. They encountered protesters throughout the CHOP who hindered their access, although other witnesses were credited with cooperating with police, even collecting shell casings and photographing the scene.

Anderson was taken to the Harborview Medical Center in a private vehicle. When officers arrived there, he was already dead. According to police, the medical examiner found he had been shot at least four times.

Long is wanted on a $2 million warrant and was still at large Thursday afternoon.

On the same night and in roughly the same area, a 33-year-old man also was shot and wounded. Police still are seeking persons of interest in connection with that case, which prosecutors said is unrelated.

Several other shootings were tied to the CHOP – including a deadly incident on June 29 that left a 16-year-old boy dead and a younger teen injured.

Seattle police moved in to clear out the protest zone on July 1.

Ole Gunnar Solskjaer: De Gea saved us for years, Henderson did the same today. Lingard played well
The semed said goodbye to Barcelona: Thank you for the opportunity to realize the dream. Eternally grateful
Juve have leased Morata from Atletico for 10 million euros with the right to buy out for 45 million
Barcelona and Atletico have agreed a move for Suarez (Fabrizio Romano)
At the 1950 world Cup, Amateurs from the United States beat England. The coach of the Americans compared their players to sheep, and the author of the winning goal went missing
Dan Henderson made his debut for Manchester United at the age of 23. He made 141 appearances on loan
Shaka Hyslop: Many black players do not see the point in coaching courses, believing that they will not be called for an Interview
Source https://www.foxnews.com/us/seattle-chop-shooting-murder-charge-horace-lorenzo-anderson

They said it: Leaders at the virtual UN, in their own words

The Latest: No women speaking on first day of UN gathering

‘Attack on Titan’ Season 4 Release Date: What We Know About Final Season

Review: In July's 'Kajillionaire,' growing up a grifter

You Have Everything On-Hand for These Creative Costume Ideas

Pritzker says new retail marijuana licenses should be awarded in the fall, but admits process has been ‘far from perfect'

Stream It Or Skip It: ‘Stuntwomen’ On VOD, A Documentary About The Ladies Who Make High-Stakes Magic Happen On Screen

Why the Best Homage to RBG Is Buying a House

This Virus Misinformation Was Coming From Inside the House

Democrats Accuse Republicans of Hypocrisy on the Court Vacancy

Justice Dept. Case Against Google Is Said to Focus on Search Dominance

Topics for First Debate Between Biden and Trump Revealed

Sen. Mitt Romney Says He Will Vote On A Supreme Court Justice Nominee

When will a coronavirus vaccine really be ready?

Tommy DeVito, founding member of The Four Seasons, dead at 92

Lakers Vs. Nuggets Game 3 Live Stream: How To Watch The NBA Live on TNT

You can register to vote at Saks

Something unusual is missing among Nielsen's top programs

Samsung event: When, where to watch live stream and what to expect

US CDC: Trick-or-treating a 'Higher-risk' Activity

Bidding from Bed with Sotheby’s

‘Where Are the Kids?’ School Is Back in Session, but Many Kindergarteners Are Missing

Here's when the presidential debates are taking place

1 in 3 U.S. families with kids don't have enough food

How to Build Rapport With Customers Online

36 Secrets About The West Wing--Including What's Next

Migrant women to no longer see doctor accused of misconduct

The unrelenting horizonlessness of the Covid world

Ralph Lauren to lay off 3,600 workers after coronavirus hit