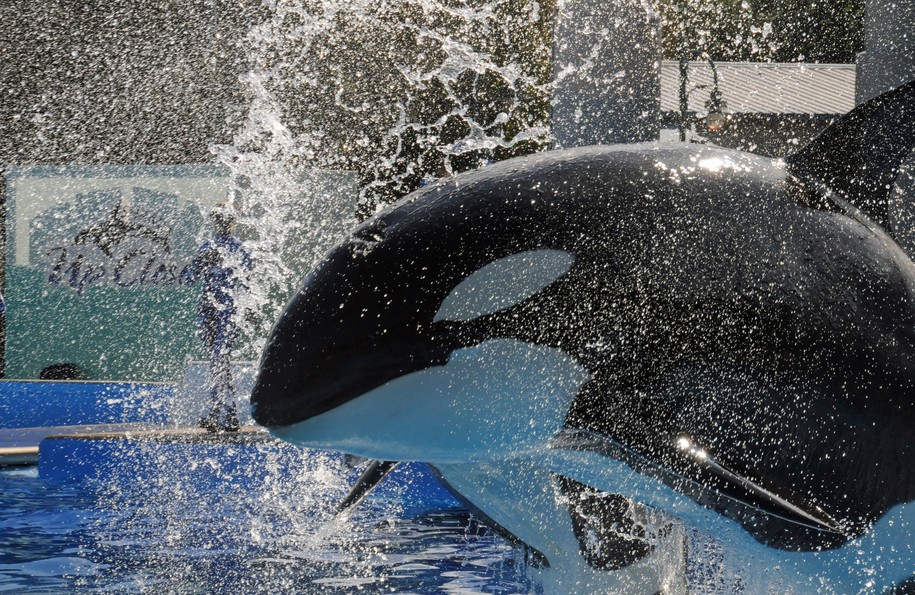 An orca performs for the audience at SeaWorld's marine park in Orlando, Florida.

What the documentary Blackfish started—namely, the long, slow demise of the captive orca theme park industry, along with its abusive practices and dubious ethics—may be finally finished by the COVID-19 pandemic.

As Orlando Weekly reports, SeaWorld’s increasingly grim bottom line is being sharply worsened by the closures of its three U.S. parks (in San Diego, San Antonio, and Orlando) during their respective states’ stay-home orders. Now there are signs—such as an astonishing pile of over 150 liens on the parks, largely from construction firms, representing millions of dollars in unpaid bills—that the company’s board may be gearing up to file for bankruptcy.

Journalist Joe Kleiman, who has been tracking the company’s fortunes at his blog (which is currently under maintenance and unavailable), reported earlier this month that he had “confirmed more than 150 liens across all of the company’s parks filed in the four months between March and June 2020, and the number keeps climbing as additional data becomes available.”

Kleiman believes these and other recent moves by the park suggest a looming court filing: "I have a strong feeling the company is contemplating filing for bankruptcy."

The company recently tried reopening its Orlando park with new protocols and soothing words from its CEO. The first day went badly, with lax enforcement of social distancing and mask requirements (even company employees were spotted going maskless), despite long lines for the popular theme park rides. The larger park itself, however, often had the look of a ghost town, and employees were hard to find.

The company’s long-term prospects appear even rockier. The company says it is able to remain afloat through 2021 without reopening, but that’s a costly outlook, since the company must continue to maintain its animals and their health even without the revenues from park attendance.

More important, perhaps, are the issues that linger from the 2013 Blackfish explosion, which sent the company’s stock spiraling down to Marianas Trench levels before more recent modest recoveries. It had to pay out $65 million to shareholders in February after losing a lawsuit over the company’s refusal to acknowledge the damage caused by the film and downplaying its negative effects.

SeaWorld reformed its shows—mainly because of federal worker protection rules that were imposed after trainer Dawn Brancheau was killed by a killer whale named Tilikum in 2010, the central focus of Blackfish—and ended its notorious breeding programs for orcas as well. However, most of these measures have been half-hearted; state safety officials returned to the park in 2015 and imposed more fines for its ongoing failures to protect trainers adequately.

SeaWorld’s stock recovery—which it touted widely in 2018—vanished with the COVID-19 pandemic. In March, the company’s stock hit its worst price since going public in 2013.

But the decisive problems could lie with the company’s ownership. Its primary shareholder, a company called Hill Path Capital led by chairman Scott Ross, has reportedly been shopping the company’s assets around, according to Kleiman and Orlando Weekly:

[M]ultiple companies have expressed interest in purchasing all or some of SeaWorld’s assets. In 2017, it looked like the investment in SeaWorld was going to pay off, thanks to a 21 percent stake by Zhonghong, a Chinese development company interested in bringing SeaWorld's brand to mainland China. Later that year, Legoland parent company Merlin expressed interest in SeaWorld’s two Busch Gardens theme parks. With things looking up for SeaWorld, in the form of their new Chinese partner and with two thrill-focused parks leading their assets, the company rejected the idea of selling or breaking up its parks.

Ten months later, however, things took a dramatic turn, when Zhonghong was forced to sell the property upon which the first Chinese SeaWorld park was to be located. Things got so bad that Zhonghong’s CEO was at one point supposedly on the run, hiding from Chinese authorities. The year ended with rumors of Six Flags kicking the tires of SeaWorld.

SeaWorld’s last two CEOs have resigned amid disputes with Ross and the company board.

Raheem sterling: Looking for tickets to Lisbon. From the 10th to the 24th. Retweet if you can help
Pep Guardiola: Gabriel is the best player of matches with Real Madrid
Three heroes of Lyon in the match with Juve – among them the defender, whom the fans drove in the fall
Manchester City and Lyon will meet in the 1/4 final of the Champions League on August 15 at Jose Alvalade
Photo of Pep and Zizou – just a gift for Showsport users
Ronaldo was eliminated so early from the Champions League for the first time in 10 years, although he tried very hard – in the playoffs for Juve, only he scores
Rudi Garcia: to Pass Juventus is a feat. The most pleasant defeat in my career
Source https://www.dailykos.com/stories/2020/7/4/1957310/-SeaWorld-s-slow-recovery-from-Blackfish-may-be-doomed-by-COVID-19-effects

‘If We Get It, We Chose to Be Here’: Despite Virus, Thousands Converge on Sturgis for Huge Rally

You can help save Lebanon — through charity and prayer

Jennifer Aniston: Latest ‘Friends’ Reunion Delay Is “Very Sad” But It Will Be “Even More Exciting And More Fun… We’re Not Going Anywhere”

An Indian royal was shot dead by police in broad daylight. Now, 35 years later, his killers have been jailed

2020 MTV VMAs will no longer be at Barclays Center, network says

Common speaks on relationship with Tiffany Haddish for the first time

Japan's coronavirus fatigue is fueling defiance in Tokyo, even as the case count rises

What Cameron Diaz doesn't have to explain

With Exhibition On The Brink, Paramount Decree Topples, A Symbolic Thumb In The Eye

Class of 83 Trailer review: Yes, this is the Bobby Deol we wanted to see!

How To Watch Raptors Vs. Celtics Live Online

Obama and the Democrats’ astonishing hypocrisy on the filibuster

'Bachelor' alum Melissa Rycroft admits she still hasn't seen her season: 'It feels like a lifetime ago'

Meet the femme fatale of Showtime thriller ‘We Hunt Together’

Beirut on the Potomac

'It's Overwhelming' — The Chinese App Ban Could Cut Off Families

Free trading app Robinhood may be behind Virtu’s stellar 2Q

Joe Biden is alienating the middle class and other commentary

Bob Greenblatt out at HBO-parent WarnerMedia as larger layoffs loom

No masks required as 250,000 expected at 10-day Sturgis Motorcycle Rally. Here's what to know.

Trump banned TikTok and WeChat. Are video games next?

While CPS pivots to remote learning, Catholic schools in Chicago and suburbs stand by plans to reopen fully as teachers and parents fret

For Tigers catcher Eric Haase, being on traveling taxi squad is a valuable oddity

Ronaldo can't save Juventus in return to Champions League action

Michelle Obama has a 'Black girl magic' playlist for you

The cold, hard truth about returning to school

Milwaukee police chief demoted after multiple incidents of 'failed leadership,' including use of tear gas at BLM protests

Jerry Falwell Jr. will take a leave of absence from Liberty University

The Coronavirus Relief Negotiations Have Collapsed

Ireland Finds U.S. Tourists During Pandemic May Be Trouble. But So Is Their Absence