Sen. Tom Cotton: When Trump gets hawkish on Russia, Dems 'curl up in the fetal position'

Although Democrats claim to be outraged over explosive reports alleging that President Trump had been aware of classified intelligence indicating that Russia offered bounties to the Taliban for the deaths of American soldiers, when the administration gets "hawkish" on Russia they "curl up in the fetal position," Sen. Tom Cotton, R-Ark., said.

In an interview Thursday on "America's Newsroom" with host Sandra Smith, Cotton pointed out that the administration and national security adviser Robert O'Brien had corrected The New York Times' report, arguing that there was "no definitive intelligence" presented to the president and that there was "strong dissent within the intelligence community" that remains to this day.

"We also know that Nancy Pelosi and Chuck Schumer and Adam Schiff have had access to the same intelligence for months, yet they haven't been taking action on it or screaming in front of the cameras until The New York Times published this story," he added. 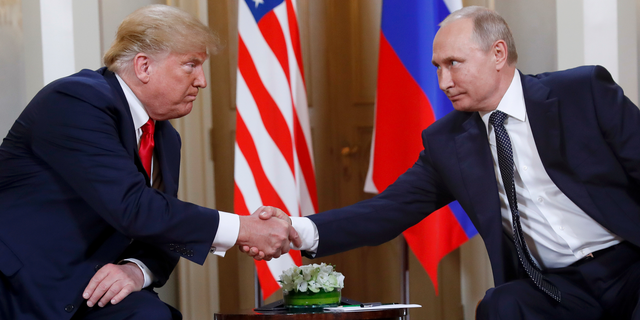 "So, I have no doubt that Russia is up to no good in Afghanistan — just as they have been in Iraq and Syria and Iran and all around the world. And, I’m always open to taking a tougher line on Russia. But, the [allegations] in The New York Times are simply false — as they usually are," he stated.

The White House and President Trump have vehemently denied these claims, calling them a "hoax," but it has been widely reported that Trump does not read the detailed brief regularly and is more often briefed on intelligence issues verbally.

Reacting to the report late Monday, the Department of Defense claimed that there is "no corroborating evidence" to validate the allegations in the "open-source reports."

On Wednesday, Eric Schmitt – one of the authors of the Times' article – called out the Trump administration for failing to "address the [report's] substance" or discuss "what they might do in response."

"I mean, just look at, though, what the Democrats have done to politicize this matter. President Trump authorized the killing of Qassem Soleimani – Iran’s terrorist mastermind earlier this year – who, there is no question, was responsible for the deaths of hundreds of Americans. Were the Democrats out supporting that?" he asked. "No. They were saying that he was going to start a war, which plainly didn't happen."

According to the Republican senator, any time the president "takes a tough action on Russia," Democrats who previously "beat their chests so hard saying that they're Russia hawks" then "curl up in the fetal position."

"They didn’t want to withdraw from those treaties. President Obama and Joe Biden didn’t send lethal weapons to Ukraine. They always roll over in the Middle East, standing up for Russia’s allies, like Iran," he concluded. "The Democrats are not the ones who are taking a tough line on Russia here; it's President Trump."

Bartomeu does not intend to retire after 2:8 from Bayern
Bayern punished Barcelona for an 8-man defense. In this match, Messi was the problem, not the solution
L'equipe put Setien one for 2:8 with Bayern. For the first time, such an assessment was received by a coach
Pozornik! Barca fans met the team at the hotel after 2:8 from Bayern
Bayer's CEO confirmed that Havertz wants to leave the club
Destruction of Barcelona - in gifs from Tiktok Davis. This is better than highlights!
Messi can leave Barca if there are no changes at the club (COPE)
Source https://www.foxnews.com/media/sen-tom-cotton-on-russia-reports-when-trump-gets-hawkish-on-russia-dems-curl-up-in-the-fetal-position

Naagin 5: Check out the massive net worth of Hina Khan, Surbhi Chandna and others

The House Should Investigate and Subpoena Postmaster General DeJoy

This was familiar, but not normal Jets training camp opener

'I have more Indians than she has': Donald Trump takes a swipe at Kamala Harris

Fantasy baseball owners must snag some of these rookies

Vaccines are safe. But huge numbers of people around the world say they wouldn't take a Covid jab

Doubts spread around the world over Covid vaccine

How a NASA scientist accidentally invented the Super Soaker