PARIS — After a resurgent first week at the French Open, Serena Williams was stopped short on Monday — not by her would-be opponent, Maria Sharapova, but by an injury to her right pectoral muscle that forced her to withdraw shortly before their fourth-round match was set to begin.

“Right now I can’t actually serve,” said Williams, 36, as she announced her withdrawal in an overstuffed interview room at Roland Garros. “It’s kind of hard to play when I can’t physically serve.”

This is the latest setback in Williams’s comeback after giving birth to her daughter, Olympia, last September.

“I’m beyond disappointed,” she said. “You know, I gave up so much, from time with my daughter to time with my family. I put everything on the court, you know. All for this moment. So it’s really difficult to be in this situation, but I always, for now in my life, I just always try to think positive and just think of the bigger picture and hopefully the next events and the rest of the year.”

Williams officially returned to the tour in March at the BNP Paribas Open in Indian Wells, Calif., where she reached the third round. But after losing in the first round of the Miami Open to Naomi Osaka a week later, Williams did not play on tour for nearly two months, choosing to focus on improving her fitness and her game at her coach Patrick Mouratoglou’s academy near Nice, France.

She made the unusual decision to forgo all of the clay court warm-up tournaments before the French Open and arrived here ranked 453rd and unseeded. But she quickly began hitting high notes once the tournament began, winning three rounds and defeating two seeded players — No. 17 Ash Barty and No. 11 Julia Görges — to set up her latest duel with Sharapova, whom she had defeated 18 times in a row.

But Williams said she began feeling pain in her pectoral muscle during her third-round victory over Görges on Saturday. She still decided to play doubles on Sunday night with her sister Venus, a match they lost in three sets. She seemed to struggle with her serve in the later stages of the match.

This is the first time Williams has withdrawn during a Grand Slam tournament, although she did retire midmatch in the third round of Wimbledon in 1998 against Virginia Ruano Pascual after injuring her left leg in a fall.

“And I have made every sacrifice I could,” Williams said. “But I also made a promise to myself and to my coach and to my team that if I’m not at least 60 percent or 50 percent, then I probably shouldn’t play.”

Numerous coaches, including hers, questioned whether it was a good idea for her to play doubles as well as singles here.

“I was not at all in favor; it’s been three years now that I’ve been against her playing doubles,” Mouratoglou said in an interview after the surprise withdrawal.

Williams ended up playing matches six days in a row, from Tuesday through Sunday. Did that play a role in the injury?

“Of course,” Mouratoglou said, adding that he was not told about the pectoral pain after the Görges match.

But Williams insisted on Monday that she had needed to play more matches after her extended break from competition, and that Sunday’s doubles match was important, as she was dealing with the effects of a new injury.

“I really felt like I needed to because I’m never going to know how I feel under match play if I didn’t have that match,” she said. 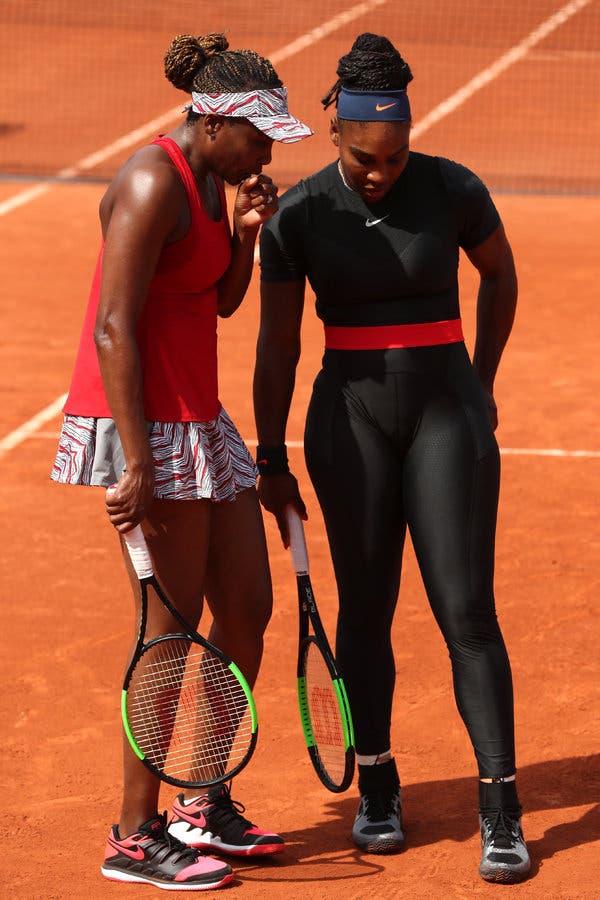 Williams, right, with her sister Venus during their doubles match Sunday.CreditMatthew Stockman/Getty Images

She said she wanted to see what treatment might work best against Sharapova.

But that matchup, which would have been their first since an Australian Open quarterfinal in 2016, was not to be. She withdrew shortly before the match was to begin after making an unsuccessful attempt to serve without pain during a practice session.

“We made the call very late, because there was rain in the forecast, and if it rained, she had an extra day,” Mouratoglou said. “So we waited. And it did not rain, so all the elements were against us.”

Sharapova and some of her team, including her coach Thomas Hogstedt, were in the waiting room in Chatrier stadium when tournament organizers informed them of Williams’s withdrawal.

“Everybody was pumped for the match; it was a little bit like a shock, because we were just ready to go on,” said Hogstedt, who added that Sharapova had been “playing very well” and “was ready for the fight.”

She will have to wait for a chance to stop her losing streak against Williams, which dates to 2004. Sharapova has won one set against Williams in the last 10 years and holds a 2-19 record against her over all.

“It’s very difficult, because I love playing Maria,” Williams said. “It’s just a match I always get up for. You know, it’s just her game matches so well against mine.”

Sharapova, seeded No. 28, has been in sparkling form this year at Roland Garros, where she has won two of her five Grand Slam singles titles.

She is now back into the quarterfinals, where she will face third-seeded Garbiñe Muguruza, the 2016 French Open champion. Muguruza played only two games on Monday before her opponent, the unseeded Lesia Tsurenko, retired with a right leg injury.

This is Sharapova’s first appearance at the French Open since 2015 because of her 15-month suspension for violating antidoping rules by using the banned substance meldonium. She returned to the tour in April 2017 but was not granted a wild card into last year’s tournament by the French Open organizers.

Sharapova, 31, has struggled with injuries as she has returned to competition, but is back in the top 30 after changing her support team: rehiring her former coach Thomas Hogstedt and hiring a new physiotherapist, Marcin Goszczynski, who has changed many of her routines.

It is unclear whether Williams will be ready in time for Wimbledon, where she has won seven of her 23 Grand Slam singles titles. The tournament begins July 2.

Williams, who already has undergone ultrasound examinations, said she would undergo a magnetic resonance imaging test on Tuesday to learn more about her injury.

“There is a lot of theories,” she said. “I have never had this before. So that’s one of the things I was telling my team. I was like: ‘I never felt this before in my life. Like, this is so painful.’ So I don’t really know how to manage it yet. Sadly, when you do have an injury that you have had before you can kind of manage it. I have pretty much had every injury in my book.”

There is always the chance, with Williams turning 37 in September, that this was her last appearance at the French Open. But she announced her withdrawal in the same spot where Rafael Nadal sat glumly with a brace on his injured left wrist to announce his withdrawal from the men’s event in 2016 before the third round.

Nadal returned to win his 10th title at Roland Garros last year and continued his traditional rumble through the draw on Monday, finishing off Maximilian Marterer of Germany in straight sets in the fourth round on the Chatrier court shortly after Williams finished off her news conference.

Her announcement was quite an anticlimax, perhaps the biggest in tennis since Roger Federer withdrew with a back injury before the championship match of the ATP World Tour Finals against Novak Djokovic in 2014.

But Mouratoglou, despite his frustrations in Paris, was ultimately undaunted.

Thibaut Courtois: to take the title, you have to suffer. It is not easy to win every match
Antonio Conte: I will not hesitate before leaving if Inter are not happy with what I am doing
Diego Godin: Inter will do everything to keep second place. Now we need to think about how to catch up with Juventus
Harry Maguire: Manchester United want to fight for trophies
Zidane on the victory over Granada: real suffered as a team. Two more games, we haven't won La Liga yet
Real have won 11 games with a minimum score in La Liga for the first time in 11 years
Akinfenwa after Wycombe's exit to the championship: the Only person who can charge me even more is Klopp
Source https://www.nytimes.com/2018/06/04/sports/serena-williams-withdraw-french-open.html?partner=rss&emc=rss

600,000 people voted in Hong Kong. China says they may have broken the law

Tucker fires back at AOC, says pols who support defunding police 'will never suffer the consequences

The people who sit by while Trump sets Roger Stone free

How the coronavirus is shaping health care politics in 2020

Hong Kong security law was only supposed to affect a handful of people. Now China says 600,000 people may have broken it

Why Not Progressive Conservatism?

The Shirking Pandemic: Everyone is Passing the Buck

Roger Stone’s Deal Is Chickenfeed Compared to Petraeus and Berger

This Day in History: July 14

Oliver Stone slams Hollywood, says it 'has become too fragile, too sensitive'

Blackmon returns to Rockies after recovering from COVID-19

Family of 1-year-old killed in NYC tells gunman: 'You took my son's life ... you can go to hell'

Did the Queen order the removal of this Australian Prime Minister in 1975?

Naya Rivera Dead at 33: Look Back at the Glee Star's Sweet Photos With Son Josey

Opinion: Is the NBA experiencing growing pains or warning signs with campus setup?

McConnell in talks with Mnuchin on next phase of coronavirus relief

US Air Force F-16 at New Mexico base, pilot injured

Texas heads to polls for Senate runoff as virus rages

4 Charged in Death of Rapper Pop Smoke in Alleged Robbery

How Australia found clout — and cover — in the EU’s shadow

Media Report: US Frees Convicted Terror Financier as Part of Deal with Iran

Tom Bergeron, Erin Andrews will not return to 'Dancing with the Stars'

How AI, ML, and AR Will Change the Face of Design

'Glee' actress Naya Rivera 'mustered enough energy' to rescue her son 'but not enough to save herself,' authorities say

'Glee' actress 'mustered enough energy' to rescue her son 'but not enough to save herself,' authorities say

Henrik Lundqvist won’t go down without a fight

A History of the Newly Resurgent ‘Black National Anthem’

We've been using the same bricks for over 5,000 years. It's time for a change.

Prison officials in New York called bosses in DC about Michael Cohen before taking him back behind bars, source says

Bryshere Gray of 'Empire' arrested after wife alleges she was assaulted, strangled

The Other Side of Plastic During a Pandemic