With fine dining on the back burner for most in 2020, fast food is getting fancy.

Truffles are now on the menu at Shake Shack, the New York City-based burger chain announced Tuesday – and eaters can get a taste of the rich, earthy flavors for under $10. 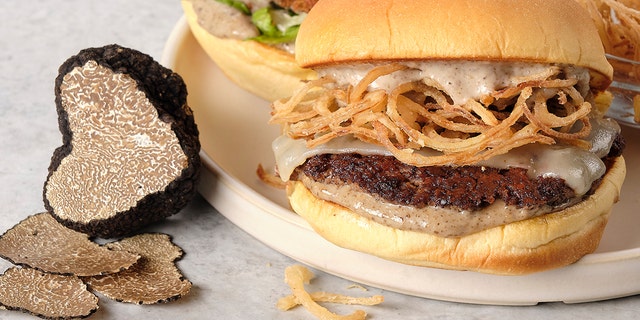 Shake Shack's BlackTruffle Burger is said to be made with real truffles, caramelized mushrooms and aged sherry vinegar for a hint of umami. (Sake Shack)

Shake Shack teamed up with specialty importer Regalis Foods, which works with Michelin-starred restaurants, for the limited-edition truffle-based menu to create a black truffle sauce made with real truffles, caramelized mushrooms and aged sherry vinegar for a hint of umami.

Eaters can expect three decadent new options. There's the BlackTruffle Burger ($8.89) made with gruyere cheese topped with black truffle sauce and shallots. Non-meat eaters can opt for the Black Truffle ‘Shroom Burger ($8.89), a crispy Portobello mushroom filled with melted muenster and cheddar cheese and topped with the truffle sauce. And the Black Truffle Shack Stack ($11.89) features both a gruyere-topped burger patty and a ‘Shroom Burger, along with the black truffle sauce.

A side of the black truffle sauce is also available for $1.50. 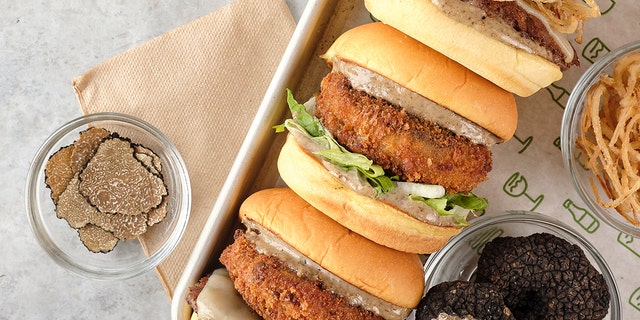 A taste of the fancy fungi comes at a more accessible price point, considering black truffles can cost upwards of $40 per ounce and more than $500 per pound depending on the type of truffle and where they’re being imported from.

Shake Shack's new truffled items, however, are only available through the end of December, or while supplies last. The burgers are currently only available at select locations in New York City and Los Angeles, as well.

Truffles are typically found in the Italian countryside, where farmers forage for the mushroom-like morsels, and in parts of France and throughout Europe.

Lazio wants to sign Modibo belonging to the bars. The defender has 2 games in Benfica since October
Verona have loaned ex-Juventus midfielder Sturaro
Jovic has 3 goals in 76 minutes after returning from Real Madrid to Eintracht
Real Madrid gave Alcoyano game T-shirts, you could choose any name. The most popular are Modric, Benzema and Ramos
Bayer have lost 4 of their last 6 Bundesliga matches. He did not concede from the beginning of the season to this series
Mikel Arteta: Lampard is a Chelsea legend. I would like the club to support him and give him a chance
Sevilla forward En-Nesiri beat Messi and Suarez to reach the 1st place in the list of La Liga scorers
Source https://www.foxnews.com/food-drink/shack-shack-truffles-burger

Democrats working on legislation to provide $3,000 payments per child amid pandemic

35-year-old man victim of a carjacking after letting someone arrange to test drive his vehicle in the Uptown neighborhood, police say

Will Indian Buffets Survive the Pandemic?

Inside the Deadly Capitol Shooting

‘We Are Forced to Live in These Conditions’: In Los Angeles, Virus Ravages Overcrowded Homes

How TV legend Larry King got his start in broadcasting

Progressives Are Seething Over Biden’s Likely Pick for Banking Regulator

San Antonio is an 'NFL city within 10 years,' mayor says

The Trump Presidency Is Now History. So How Will It Rank?

Trump's extraordinary efforts to overturn the election: A timeline

Humphries wins another monobob gold, leads 1-2 finish for US

Researchers are developing stickers for masks to detect COVID

Reaction to the death of Larry King

‘Ma Rainey’s Black Bottom’ Team On The Power Of Music: “The Blues Is America” – Contenders Film

Capitol riot dilemma: Which rioters should stay behind bars before trial?

Biden is caught in an almost impossible vise

Hawley, Stefanik call for investigation into Chinese role in coronavirus outbreak, as Biden restores WHO ties

Larry King: An appreciation of his legacy from CNN president Jeff Zucker

'Crazy' that Eric Bieniemy has yet to be hired as head coach, Chiefs' Patrick Mahomes says

Jill Biden brings cookies to troops, thanks National Guard for 'keeping my family safe' during inauguration

Mbappe’s PSG future uncertain as he hesitates over new deal

Back on track: Competing, not cash, lures big names to meet

Aloha shirts on ‘boogaloos’ link symbol of peace to violence

Embattled Roma gets some relief with 4-3 win over Spezia