South Dakota dog takes rattlesnake bite for its owner while on hike: report

An 11-year-old Yorkshire Terrier was bitten by a rattlesnake in South Dakota while on a walk with its owners last Friday, a report from local news outlet KEVN Black Hills FOX shares.

The small pup, who is affectionately named Bear, spotted the venomous serpent while Devin Diede and his wife, Alex, were hiking throughout the Centennial Trail in Snohomish County. 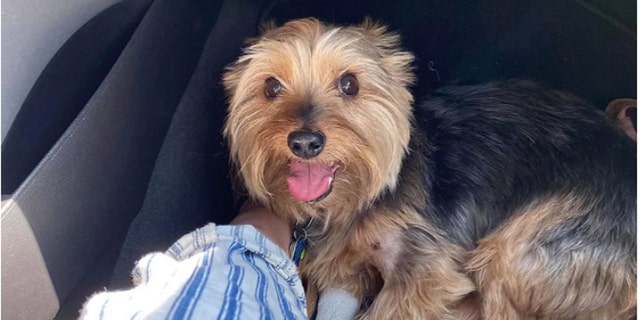 Eleven-year-old Yorkshire Terrier was bitten by a rattlesnake in South Dakota while on a walk with its owners, Devin Diede and Alex. (Photo courtesy of Devin Diede)

It was by Sheridan Lake where the trio crossed paths with the surprisingly silent rattlesnake, which bit Bear after it was almost stepped on by the unsuspecting couple.

“Alex would have stepped on the snake and [it would’ve] bit her if Bear had not been there to take the bite,” Diede told KEVN while adding that the snake struck without warning and only rattled after it had lunged at his beloved pet.

“He’s a tough little guy and most definitely a hero,” Diede said in reference to Bear. “He didn’t yip or bark.”

The couple could not immediately tell whether Bear had actually got bitten since it was difficult to find puncture wounds. However, they eventually noticed that their little terrier was not putting weight on its front leg and rushed to the nearest veterinarian clinic, which was more than 20 miles away from Sheridan Lake according to routes on Google Maps. 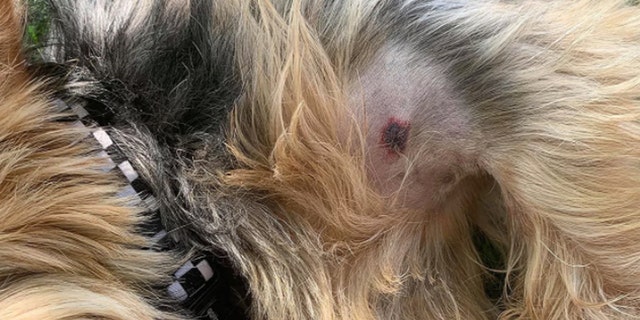 Bear the dog was bit by a rattlesnake in South Dakota. A single puncture wound on the dog’s chest is all that remains from the ordeal. (Photo courtesy of Devin Diede)

By the time the couple arrived – around and hour and a half later – Bear was reportedly unable to walk.

“Thankfully, the veterinarians and technicians at the emergency animal clinic in Rapid City were wonderful,” Diede told KEVN. “The vet took him and immediately started a blood transfusion.”

Bear remained at the vet overnight, but luckily he was able to go home after 24 hours. A single puncture wound on the dog’s chest is all that remains from the stressful and potentially deadly ordeal.

“He’s doing surprisingly well,” Diede shared. “He’s walking around just fine and as happy as could be.” 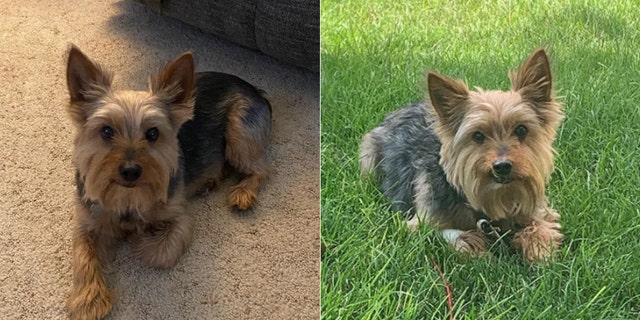 Bear the dog is recovering after getting bit by a rattlesnake in South Dakota. (Photo courtesy of Devin Diede)

Though not listed by the South Dakota Game, Fish and Parks, prairie rattlesnakes are reportedly present in the state.

"There's not a corner or a neighborhood or a street in Rapid City where I haven't been called in to capture a rattlesnake,” Terry Phillip, a snake curator at the Reptile Gardens in Rapid City told South Dakota News Watch in 2018. “Near the hospital, on pavement downtown, at Canyon Lake Park or below M Hill. They're found everywhere."

The state doesn’t have a formal record of how many rattlesnakes are present but confirmed snake bites are rare in the region and the rest of the U.S., as are deaths related to venomous snake bites.

It's time to learn the names of new Borussia heroes. Now there are 17-year-old boys making goals
Paulo Fonseca: it's Important to bring Smalling back to Roma. We have only 3 Central defenders
Arteta about 2:1 with West ham: Arsenal made life difficult for themselves with losses, but they fought and believed in victory
Palace midfielder Townsend: Could have beaten Manchester United with a bigger difference. We had moments
Philippe Coutinho: I am motivated and I want to work hard to make everything work out well on the pitch
Torres on Chelsea: I Thought I could remain a top player, but I was unstable. Although there were enough successes
Neville on the broken penalty against Manchester United: an Absolute disgrace
Source https://www.foxnews.com/great-outdoors/south-dakota-dog-rattlesnake-takes-bite-for-owner

Felicity Jones, who portrayed Ruth Bader Ginsburg in 'On the Basis of Sex,' pays tribute to late justice

Trump says he thinks he'll have a nominee next week

I Was One of Justice Ginsburg’s First Law Clerks. The Experience Shaped My Career and My Marriage

Mets get Jacob deGrom news they were hoping for

Vulnerable GOP Sen. Collins splits with Trump: Wait until after the election to replace Ginsburg

Trump says Supreme Court pick will ‘most likely’ be a woman, announcement could come ‘next week’

Adam Gase under pressure as Jets head into 49ers challenge

How The 'Notorious RBG' Got Her Nickname

Nadal beaten by Schwartzman in 1st tournament in 7 months

How Democrats Could Pack the Supreme Court in 2021

Trump says he has approved a deal for purchase of TikTok

Trump Says Deal Between Oracle and TikTok Has His ‘Blessing’

How Did Ruth Bader Ginsburg Change The Supreme Court?

IPL 13: Maxwell to be eligible for selection for Kings XI's opening game

Nicole Kidman Refused To Perform With Husband Keith Urban For The ACM Awards?

Susan Collins says she opposes holding a vote on a replacement for Ginsburg before the election.

George Floyd To Get Minneapolis Street Section Named For Him

As Trump campaigns, Senate prepares for battle over Ginsburg vacancy

Lindsey Graham Goes Back on His Word, Vows to Vote for Ginsburg Replacement Before Election

Jessica Mulroney Explains Where Her Friendship Stands With Meghan Markle

Ruth Bader Ginsburg To Be Honored With A Statue in Brooklyn, New York

Ginsburg Expected to Lie in Repose at the Supreme Court

Emmy predictions: Who we think will win in 2020

What GOP Leaders Said About Merrick Garland Back In 2016

AP Explains: What’s next with the Supreme Court vacancy?

Susan Collins says Trump can nominate a justice, but Senate vote should wait until after election

How the Supreme Court could now limit abortion rights

GOP's Supreme Court hypocrisy in their own words

Wildfire-weary Californians, 'tired of this being normal,' consider uprooting their lives