WASHINGTON — Senate Democrats have begun a concerted push to make the fight over Judge Amy Coney Barrett’s confirmation to the Supreme Court a referendum on the Affordable Care Act, working to turn a short-term victory for President Trump and Republicans into a liability that could cost them control of the Senate.

The strategy accelerated on Thursday on the Senate floor, where Democrats briefly seized control and forced a largely symbolic vote on a measure to bar the Trump administration from continuing its litigation to overturn the health law. The bill was always destined to fail, but Democrats insisted the Republican opposition it garnered clarified the stakes of the intensifying confirmation fight.

“This is a one-two punch to the American people,” said Senator Chuck Schumer of New York, the Democratic leader. “First, vote against our motion to protect Americans’ health care. Second, vote for Judge Amy Coney Barrett, who wants to take away your health care. Every, every, every action of the Republicans shows which side they are on.”

In a sign that they recognized the political peril in the Democrats’ tactics, a handful of the most vulnerable Republican senators facing re-election next month crossed party lines to support the measure, risking the wrath of the party base that is deeply opposed to the health care law.

With Republicans bent on portraying the Democrats’ opposition to Judge Barrett as an attack on religious freedom based on her devout Catholicism, Democrats are determined to steer their criticism elsewhere, highlighting an issue that polls show is a top concern for voters. The plan was cemented in a recent discussion between Mr. Schumer, Speaker Nancy Pelosi and former Vice President Joseph R. Biden Jr., the Democratic presidential nominee, who agreed the best way to confront Mr. Trump’s election-season confirmation push was with a singular focus on the potential threat to health care, rather than on personal attacks on Judge Barrett.

For now, Democrats have opted against using parliamentary tactics to grind the Senate to a complete halt to try to delay a confirmation vote until after the election on Nov. 3, as some progressive groups have demanded. And after a brief discussion, Democratic members of the Judiciary Committee rejected suggestions to sit out days of confirmation hearings scheduled for this month.

“It has a limited impact,” said Senator Richard J. Durbin of Illinois, the No. 2 Senate Democrat and a veteran of decades of confirmation showdowns as a member of the judiciary panel. “It is a matter of hours. It is not even usually days.”

Instead, they are trying to starve the confirmation process of legitimacy by boycotting customary “courtesy visits” with Judge Barrett, and they intend to exploit opportunities in Senate procedure where they can make the case to voters that Republicans are racing to install someone on the nation’s highest court whose writings suggest she regards at least parts of the health care law as invalid. A case challenging the law is scheduled to come before the Supreme Court the week after Election Day.

The calculation is rooted in realism: Democrats have neither the parliamentary power to delay the confirmation until after the election nor the votes to block her eventual approval.

“Our biggest tool is to let the American people know the thing that they care about the most — their health during the pandemic — is in jeopardy, serious jeopardy with this nominee,” said Senator Mazie K. Hirono, Democrat of Hawaii.

The approach appeared to work on Thursday, when five vulnerable Republicans facing voters next month — Senators Susan Collins of Maine, Cory Gardner of Colorado, Joni Ernst of Iowa, Martha McSally of Arizona and Dan Sullivan of Alaska — crossed party lines to support moving ahead on Democrats’ bill. (It still failed on a vote of 51 to 43, having fallen short of the 60 votes necessary to advance, but the outcome was a rare rebuke by the Republican-led Senate of Mr. Trump’s position.) 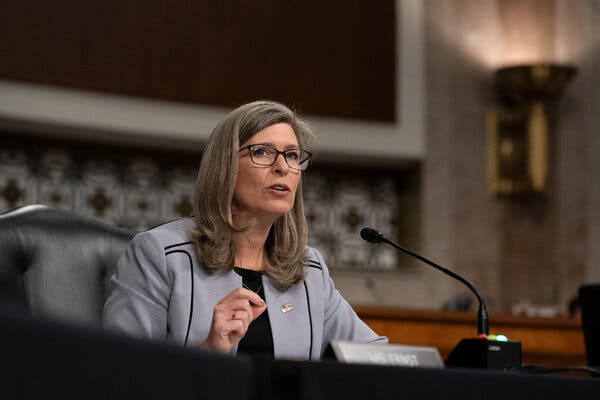 Senator Joni Ernst of Iowa and several other vulnerable Republicans up for re-election voted for the Democrats’ bill on Thursday.Credit...Pool photo by Stefani Reynolds

The vote was an unusual instance in which Republicans allowed themselves to be procedurally bested by Democrats. As the majority party, Republicans control the Senate floor, including what comes up for a vote and what does not. But this week, Mr. Schumer waited until no Republicans were present on the chamber floor, sought recognition to speak and, then, catching the majority by surprise, managed to wrest control and schedule a vote.

Republican leaders warned their members this week to brace for more procedural tactics from the minority that could require them to stay in Washington through much of October, when they had hoped to return to their states to campaign.

But with the possibility of a lasting 6-to-3 conservative Supreme Court majority on the line, they have had few qualms about their rapid timeline and, with minor exceptions, rank-and-file lawmakers appear to be united behind them.

Republican leaders intend to make religious discrimination the centerpiece of their pushback against the Democrats, hoping to tempt them into attacks on par with those unleashed in 2018 on Justice Brett M. Kavanaugh over sexual misconduct. Republicans believe the aggressive stance backfired on Democrats and energized Republican voters, a dynamic they hope to replicate this year, eyeing an opportunity to hang on to threatened seats in Kansas, Georgia, North Carolina and Iowa.

Though Democrats say they have no intention of focusing heavily on Judge Barrett’s faith, Republicans have already shown they are ready to seize on and amplify any suggestion that the nominee is driven by her religion rather than the law.

“We do not often hear people say they simply dislike a particular religion altogether,” said Senator Mitch McConnell, Republican of Kentucky and the majority leader. “No, going all the way back to Jack Kennedy, the more common accusation has been something a little subtler: That people of deep faith, or certain faiths, are incapable of being fair or objective.”

Judge Amy Coney Barrett meeting with Senator Steve Daines, Republican of Montana, on Thursday in the Capitol.Credit...Anna Moneymaker for The New York Times

For Mr. Schumer and his leadership team, the strategy is not merely about making Republicans squirm. The Democratic leader, who has long inspired mistrust from certain elements of the party’s progressive wing and wants to fend off a primary challenge for his own seat in 2022, needs to show the Democratic base that he is willing to fight, even if a short-term victory in the confirmation battle is out of reach.

Progressive groups mobilizing around the Supreme Court vacancy have circulated a memo outlining more than a dozen stunts Democrats could employ in the House and Senate to try to trip up Republicans, including impeachment and forcing the Senate to waste time taking roll-call votes on routine matters.

“We urge you to employ every tactic at your disposal to prevent a premature confirmation, including making use of tools the House might wield to support action in the Senate,” Demand Progress, one such group tied to the memo, wrote in a letter to Mr. Schumer and Ms. Pelosi on Thursday. “This may even necessitate keeping members of the House of Representatives in Washington, D.C., past their scheduled adjournment at the end of this week.”

Anticipating a possible rift, Mr. Schumer made sure to invite Representative Alexandria Ocasio-Cortez of New York, the influential progressive, to a news conference outlining the coming fights two days after the death of Justice Ruth Bader Ginsburg. It was highly unusual for a party leader to be standing alongside a freshman House member, but the message was clear: Democrats, Mr. Schumer said, are “unified.”

The vote on Thursday was intended to showcase that fight, and afterward, Mr. Schumer cryptically hinted that other maneuvers to disrupt Senate business were still to come.

“Because of the way Mitch McConnell has defiled the Senate, there are fewer tools in the tool kit and they are less sharp,” he said in an interview. “But we will use every one we can.”

Mr. Schumer has buy-in from his colleagues who concede that Senate rules — and changes forced through by both parties since 2013 because of the confirmation battles — give them little opportunity to seriously slow the nomination.

“The issue of procedural blockades can all be set aside quickly by the majority,” said Senator Jeff Merkley, Democrat of Oregon and a leading progressive.

Dabbling in extreme tactics like impeachment to try to stop the Republicans would simply backfire, he said.

“That would do much more damage to our effort to highlight to American citizens what is at stake here and encourage them to hold our Republican colleagues accountable,” Mr. Merkley said.

Bulykin about the Champions League: I Want to see Loko at least in 3rd place to watch their matches in European competitions in the spring
Liverpool first time not conceded in the first two rounds in the Champions League group
20-year-old Felix scored 2 goals for Red Bull. Only Aguero was younger when he did a double for Atletico in the Champions League
Rybus about 1:2 with Bayern: Loko tried to play football, not just sit in defense and kick the ball forward
Real Madrid is 4th in the group. We lost until the 93rd minute after the double of our son tyuram (he started in Barcelona)
It is important not to impress, but to score. Another power from the Loco to the words of Nikolic after the match
Andre Villas-Boas: city spent a billion and the coach is a phenomenon. Marseille don't have money for Guardiola, so you have AVB and his tactics
Source https://www.nytimes.com/2020/10/01/us/politics/health-care-senate-democrats-supreme-court.html

US accuses Syria of delaying constitution ahead of election

Pregnant Woman Is Strangled as N.Y.C. Has 3 Domestic Violence Killings in Days

‘The Bachelorette’ Recap: Clare Only Has Eyes for Dale

Firefighters save cabin from wildfire and leave note for owner

Woman allegedly posed as prosecutor, dropped charges against herself

‘Look out for my family’ — Hunter’s biz partner tells all on meeting with Joe Biden: Goodwin

The Latest: Virus spreading in S Korea as restrictions ease

7 celebrities who have raised money for Biden

National Guard being deployed in Philadelphia after fatal police shooting

Breaking down good, bad and ugly of Giants’ roster

How do Media Organizations Report Election Results in Real Time?