Good morning. (Was this email forwarded to you? Sign up here.)

The economic comeback has stalled. Stocks are higher.

As coronavirus infections surge in the U.S., fears are rising that the nascent economic recovery is fizzling. But investors seem unfazed.

Daily cases are setting records, with Florida recording the highest one-day total to date over the weekend. Hospitals are straining; health officials warned that more people will die; the country’s top infectious disease expert, Dr. Anthony Fauci, is reportedly being sidelined; and challenges remain in both diagnostic testing and procuring safety equipment.

That’s weighing on the economy. Morgan Stanley economists worry that the U.S. could start shedding jobs, while Bank of America warned that the V-shaped phase of the recovery has given way to a slower “healing phase.”

• Consumers are anxious. A YouGov survey found over a third of Americans would save an unexpected windfall rather than spend it. (That feeling is more pronounced overseas, with nearly 60 percent of Britons preferring to save the money.)

• And the reopening of offices isn’t always going smoothly, with tension between coworkers over masks, social distancing and more, The Wall Street Journal’s Sarah Needleman reports.

Yet U.S. stock futures are up today, following gains in Asia and Europe. That makes some market watchers uneasy. “This is one of those moments where we have to be realistic about bad news, rather than throw up our hands and pretend it’s not happening,” Bloomberg Opinion’s Cathy O’Neil writes.

• The disconnect will be put in sharper relief by the start of earnings season. S&P 500 companies are expected to report a 44 percent drop in profits, on average, for the second quarter; Goldman Sachs analysts think the decline could be more like 60 percent. 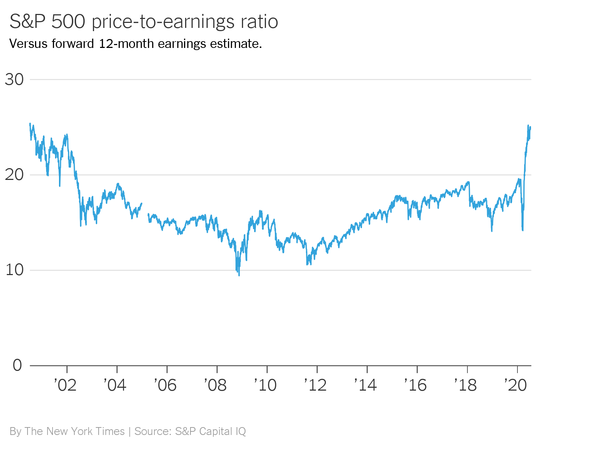 Amazon ordered workers to delete TikTok from their phones, then changed its mind.Credit...Hayoung Jeon/EPA, via Shutterstock

Here’s what is happening

Chatham Asset Management has won the bidding for McClatchy. The hedge fund, which owns The National Enquirer, prevailed in a competitive auction for the bankrupt newspaper publisher. Chatham plans to keep all 30 of McClatchy’s news outlets, which include The Kansas City Star, The Miami Herald and The Sacramento Bee.

Amazon ordered employees to delete TikTok — then changed its mind. The company told workers on Friday to remove the video app from cellphones, then hours later said that the order was sent in error. Policymakers are concerned that the Chinese-owned app poses national security risks, and users worry that it may be banned.

Corporate leaders urge President Trump to leave DACA alone. Executives of Amazon, G.M. and Hilton, as well as the U.S. Chamber of Commerce, pressed the White House to keep Obama-era protections for 800,000 young immigrants after the Supreme Court ruled that an attempt to wind the program down was improper.

Tesla is close to setting a dubious record. The electric-car maker may become the first company to have its stock face $20 billion worth of short interest, or bets that its shares will drop, according to data from S3 Partners. So far this year, the company’s shares have gained more than 200 percent.

Thousands turned out for Walt Disney World’s reopening. The theme park welcomed visitors — after imposing coronavirus safety measures — on Saturday, even as Florida reported more than 15,000 new coronavirus cases. “We will take any amount of normalcy and any amount of joy that we can get,” one attendee told The Times.

How FedEx forced Washington’s N.F.L. team to change its name

Washington’s pro football team is expected to announce as soon as today that it will drop the “Redskins” name, which many consider to be a slur.

FedEx played a huge role, The Times’s Ken Belson and Kevin Draper report. The logistics company pays $8 million a year for naming rights to the team’s stadium, and its chairman, Fred Smith, is a minority owner of the franchise.

• The company said on July 2 that it would withdraw from the stadium deal if the team name wasn’t changed. The next day, team officials said they would conduct “a thorough review” of the matter.

FedEx’s letter “was really a turning point,” one N.F.L. owner told The Times, adding — in acknowledgment of protests over systemic racism — “at this point in time, you can’t be insensitive.”

The expected announcement won’t include the new name, The Washington Post reports: There’s a trademark fight that needs to be settled.

Michelle Leder is the founder of the S.E.C. filing site footnoted*. Here, she explains how a seemingly obscure rule change could greatly reduce what we know about institutional investors’ portfolios. You can follow her on Twitter at @footnoted.

On Friday, a popular time to publish controversial news, the S.E.C. proposed sweeping changes to the financial disclosure filing known as 13-F. It came in the form of a 53-page document with 90-odd footnotes.

The forms, which are published each quarter by institutional investors who manage over $100 million in assets, have been a staple of investment research for more than 40 years. They reveal quarter-end stock holdings, which are used to track the buying and selling of shares by the so-called smart money.

Under the S.E.C.’s proposal, the filing threshold would rise to $3.5 billion, “reducing unnecessary burdens on smaller managers,” according to Jay Clayton, the commission’s chairman. The change would eliminate nearly 90 percent of all 13-F filings, based on the regulator’s own research.

The S.E.C. notes that the change would still require disclosure for 90 percent of the dollar value of stock holdings. Very large investors, like Warren Buffett’s Berkshire Hathaway, whose holdings are tracked obsessively, would still be required to file 13-F’s, as would boldface names like Bill Ackman’s Pershing Square, Seth Klarman’s Baupost Group, and Dan Loeb’s Third Point.

Not everyone finds the forms useful. A longstanding complaint is that 13-F disclosures are out of date, since filers have up to 45 days to disclose their holdings. (The S.E.C. has ignored calls to make these disclosure more timely.) The forms do not account for short positions or other types of investments. And filers can request “confidential treatment” that delays disclosure, as Berkshire Hathaway did in 2015 as it was building a position in Phillips 66.

The S.E.C. is soliciting public comment on the proposal for 60 days.

Everyone who’s richer than Warren Buffett

The Oracle of Omaha said last week that he had given $2.9 billion to charity. That generated headlines about his generosity — and made room for others to surpass him in net worth, which now stands at $69 billion.

• There’s Mukesh Ambani, India’s richest man, whose Reliance Industries has more than doubled in stock price since March. Net worth, per Bloomberg: $70.2 billion.

• And there’s Elon Musk, who has benefited from a run-up in Tesla’s shares. Net worth: $70.5 billion.

Wells Fargo is one of three big U.S. banks to report earnings on Tuesday.Credit...Damian Dovarganes/Associated Press

🏦 America’s biggest banks report second-quarter earnings this week, with analysts expecting loan-loss provisions to eat into profits in a major way. Trading and fee income will help those with strong investment banking divisions, but the probable drop in earnings could put pressure on dividends. Citigroup, JPMorgan Chase and Wells Fargo report on Tuesday, Goldman Sachs is up on Wednesday, and Bank of America and Morgan Stanley round things out on Thursday.

🗣 Other companies reporting earnings this week: Delta Air Lines on Tuesday, kicking off what’s expected to be the worst quarter ever for airlines; Netflix on Thursday, giving an update on how lockdowns have lifted subscriptions; and Johnson & Johnson, also on Thursday, providing news on its coronavirus vaccine. BlackRock, Burberry, Charles Schwab, Domino’s Pizza and PepsiCo are also due to release results.

🛢 OPEC members and Russia will hold a virtual meeting on Wednesday, in which the major oil-producing states are expected to reverse production cuts. But a resurgence in coronavirus infections may scuttle those plans.

💰 Officials at central banks around the world will debate economic stimulus. The Bank of Canada and Bank of Japan are to announce their latest moves on Wednesday, and the European Central Bank on Thursday.

🛍 Key gauges of U.S. consumers will come on Thursday, with the data on retail sales, and Friday, with a reading of consumer confidence. Both are expected to improve, but not by as much as last month.

• Multiplan, a health care services provider, agreed to merge with the “blank-check” investment company Churchill Capital III and go public in a $11 billion deal. It’s the biggest merger to date to be structured that way. (Reuters)

• Facebook, which is under pressure for allowing misinformation and hate speech, is considering banning political ads. (NYT)

• The carmaker Rivian has raised $2.5 billion as it races Tesla and Nikola to introduce the first all-electric pickup. (CNBC)

Best of the rest

• “Wall Street Gets the Flak, But Tech C.E.O.s Get Paid All the Money” (Bloomberg)

• Why a crisis is a good time to raise workers’ pay. (FT)

Thanks for reading! We’ll see you tomorrow.

Ex-Director of Valencia on the transfer of Ronaldo: in 2006, the club agreed with his agent and sponsors, but the deal did not take place
Klopp, Lampard, Rodgers and Wilder claim the award for the best coach of the Premier League, Pep-no
The authors of Showsport choose the winner of the Champions League: Chernyavsky - for Leipzig, Muiznek believes in real 🤪
Trent, rashford, martial and Greenwood are up for the award for the best young player of the season
Ronaldo started the 2016-17 season poorly – and then scored 10 goals in the Champions League play-offs and produced the best performance in the history of the tournament
Henderson, de Bruyne, Pope and Ings is among the contenders for the award for the best player of the Premier League season
The Bundesliga plans to start the season on September 18 with a match between Bayern – Schalke or two Borussia
Source https://www.nytimes.com/2020/07/13/business/dealbook/stocks-earnings-virus.html

Should You Cancel Your Company's Subscription-Based Services? 4 Questions to Ask

US adds 1.8 million jobs in July amid coronavirus pandemic

US adds 1.8 million jobs in a sign that hiring has weakened

Europe Is Near the Brink of a Second Wave of COVID-19. Will Its New Containment Strategy Work?

COVID-19 Isn’t the First Pandemic to Affect Minority Populations Differently. Here’s What We Can Learn From the 1918 Flu

Explainer: Trump Wants to Bypass US Coronavirus Aid Talks With Executive Order. Can He?

1.8M jobs added in July, unemployment falls to 10.2% as some states halt reopening, others press ahead

‘The Rain’ Recap: What to Remember Before Season 3

Giants mailbag: Patrick Graham will have to get creative with defense

Power outage leaves large swaths of Manhattan in the dark

Europe has yet to live up to its Covid-19 promises

Netflix filmed her surprise divorce. Now she's ready to 'rip off the Band-Aid'

The ‘Indirect’ Costs at College Can Involve Nasty Surprises

More Wealthy Families Are Throwing a Lifeline to Distressed Businesses

California Doesn't Have Covid-19 Travel Restrictions. But Here's How to Protect Yourself

Day of Radio Silence in Guinea-Bissau Protests Attack on Station

Facebook Will Let Employees Work From Home Through July 2021

Melissa Etheridge talks grief and healing after son Beckett's death: 'Is it my fault?'

US Adds 1.8 Million Jobs in Sign Hiring Has Slowed

US adds 1.8 million jobs in a sign that hiring has slowed

Milwaukee police chief demoted after questions over use of tear gas, pepper spray at protests

‘Shameful’: Biden slams Trump for saying he would ‘hurt God’ if elected

HBO’s ‘Lovecraft Country’ is a Thrilling Ode to Pulp Fiction

Biden Fires Back at Trump’s Remarks About His Religious Views

Chicago police exchange gunfire with suspect on South Side, no one injured

How 'The Matrix' is a trans story, according to Netflix and co-director