Get all the latest news on coronavirus and more delivered daily to your inbox. Sign up here.

Millions of people have been ordered to evacuate from coastal areas of India and Bangladesh ahead of a super cyclone that's already tied a record for the strongest storm in the region.

Super Cyclone Amphan is forecast to make landfall Wednesday morning near the border of the two countries. Forecasters warn of extensive damage from high winds, heavy rainfall, tidal waves, and some flooding in crowded cities like Kolkata.

“This type of cyclone can be disastrous ... It is completely unsafe,” India’s meteorological chief Mrutyunjay Mohapatra said Tuesday.

Amphan had sustained winds around 126 mph on Tuesday, the equivalent of a Category 3 hurricane in the Atlantic, according to the Joint Typhoon Warning Center. The storm is forecast to weaken before landfall around India’s West Bengal state and Bangladesh. 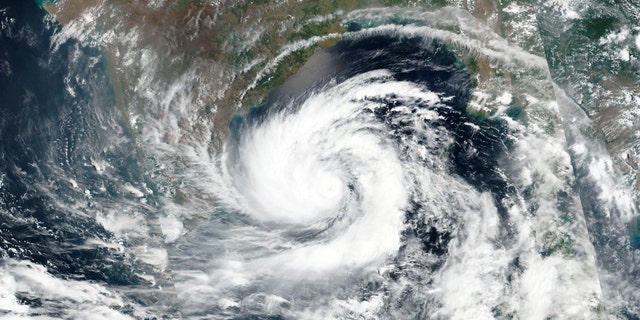 This May 17 satellite image released by NASA shows Cyclone Amphan over the Bay of Bengal in India. (NASA Worldview, Earth Observing System Data and Information System (EOSDIS) via AP)

The storm rapidly intensified from 75 mph to 160 mph in just 24 hours from Sunday to Monday, strengthening from a Category 1 to a Category 5 equivalent storm on the Saffir-Simpson Hurricane Wind Scale. The storm's winds then increased to 165 mph.

Colorado State University research scientist Phil Klotzbach said on Twitter that Amphan's powerful winds tied it with Gonu in 2007 for the strongest tropical cyclone on record in the North Indian Ocean since 1972.

It is the second super cyclone on record that has formed over the Bay of Bengal, Mohapatra told the Associated Press. The first of that classification was the devastating 1999 cyclone in Odisha state that left nearly 10,000 dead.

Amphan's winds are whirling 435 miles from its eye as it approaches land. 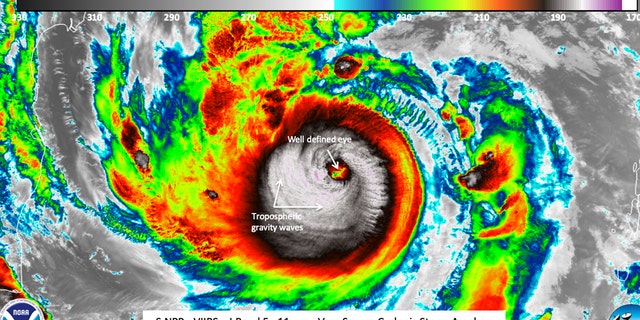 Tropical Cyclone Amphan rapidly intensified from 75 mph to 160 mph in just 24 hours from Sunday to Monday, strengthening from a Category 1 to a Category 5 equivalent storm in a day. (NOAA)

The storm is forecast to pass between the seaside resort town of Digha in India’s West Bengal state and Hatiya Island in Bangladesh with a weaker wind speed of between 102 and 108 mph.

Forecasters have warned that Amphan could bring 10 to 16 feet of storm surge. India's Meteorological Department (IMD) has issued a red alert for heavy rain and strong winds in West Bengal.

Officials in India said they are moving families to more than 1,000 shelters in government offices and educational centers, in addition to hastily converting coronavirus quarantine centers into cyclone shelters. 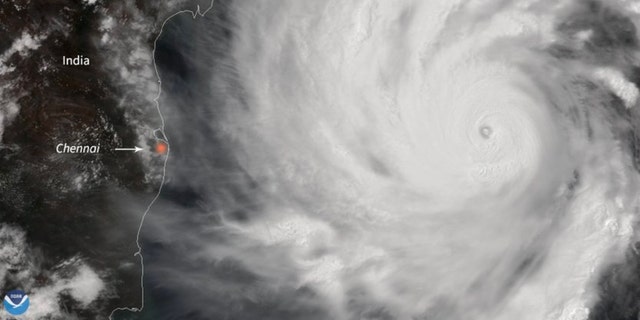 Tropical Cyclone Amphan is seen off India on Monday. (NOAA)

“We have just about six hours left to evacuate people from their homes and we also have to maintain social distancing norms...the cyclone could wash away thousands of huts and standing crop,” S.G. Rai, an official in federal disaster management office told Reuters on Tuesday.

The Meteorological Department in Bangladesh said the cyclone could flood vast spans in southwestern and southern Bangladesh from tidal waves 4 to 5 feet higher than normal, along with heavy rainfall and high wind.

Bangladesh's disaster management minister told the BBC that it plans to evacuate about 2 million people. Officials there told the BBC that extra shelters have been prepared to allow for social distancing and that masks are also being distributed in light of coronavirus concerns.

After reaching land, the cyclone is expected to move away fast and weaken by Thursday.

Simone Inzaghi: Scudetto for Lazio-a place in the Champions League. Talk of winning Serie A was exaggerated
Player the Premier League has admitted that he is gay anonymously. The letter was sent to the newspaper by the Foundation named after a football player who committed suicide after coming out
Messi has given 20 assists in La Liga. This is the best result of the tournament in 11 years
Chelsea lost by at least 3 goals in the Premier League for the first time in 11 months
Messi scored 20+20 points for the season in the League and repeated the achievement of Henri. In the XXI century, only they did it
Legia won the Polish championship for the 4th time in five years. It repeated the League record for titles (14)
Lazio has lost 3 matches in a row and can concede 2nd place in Serie A if Atalanta wins against Juve
Source https://www.foxnews.com/world/tropical-cyclone-amphan-india-bangladesh-super-cyclone-extreme-weather-storm

Review: The high-end horror of 'Relic' chills to the bone

Yankees’ Aroldis Chapman has the coronavirus

Royals’ Cam Gallagher learns he has coronavirus after game

Search for Naya Rivera enters fourth day: 'Our goal is to bring the family closure'

J.R. Smith told to stop ‘exposing too much s–t’ in NBA bubble

Texas slugger Gallo still isn’t sure if he had coronavirus

Pediatrician: The truth about reopening schools during Covid

Goya always cared more about money than its Latino customers. The CEO proved it.

A critically endangered gorilla is about to be a mom, and she's using a doll for practice

Record Coronavirus Cases Reported, As US Stands At A Recovery Crossroads

Masvidal finally gets title shot on short notice at UFC 251

Sociopaths—that's all that's left of the Republican party

Lazio’s title bid has fallen apart during Serie A restart

Valentina Sampaio Is the First Transgender Model for Sports Illustrated

Expect many more MLB players to opt out of 2020 season: Sherman

Puerto Rico questions Spain’s legacy as statues tumble in US

'Nothing can be off the table' as California coronavirus deaths surge toward 7,000

Kenya Barris On Mining His Life For ‘#BlackAF’, Being Noisier On Netflix & Plans For One More ‘Ish’ Spin-Off

Nearly half of NYC’s bloody June played out across 10 precincts: NYPD

Mysterious Botswana elephant deaths may be due to new pathogen

Victoria Beckham congratulates son Brooklyn on his engagement to Nicola Peltz: “We could not be happier'

Brooklyn Beckham and Nicola Peltz are getting married

NYC reopening plan could leave 90,000 students stranded with no buses

Even during pandemic beekeeping remains an essential service

'It takes 150 redials' Horror stories from Californians filing unemployment claims, getting no results