Sweden becomes an example of how not to handle COVID-19

Stockholm — Sweden is one of the richest countries in the world, and as nations started grappling with the coronavirus pandemic earlier this year, the Swedes took a totally different approach to their neighbors. While other nations quickly imposed lockdowns, Sweden allowed people to keep living largely as normal.

Stores and restaurants have remained open throughout the pandemic, as have elementary and middle schools.

The economy has still taken a serious hit, however, and now Sweden is being seen as a cautionary tale on the risks of allowing businesses to reopen too early.

The country's mortality rate from the coronavirus is now 30% higher than that of the United States, when adjusted for population size.

Swedish health officials believed a few basic measures, including limiting gatherings to a maximum of 50 people, would control the spread of infections — along with Swedish common sense.

Stockholm residents who Palmer met on the streets said they were trying to social distance, when possible, but face coverings are still a rarity. Taking a ride on Stockholm's subway, Palmer was the only one on the train wearing a mask.

But there's no doubt that Sweden's "lockdown lite" has cost lives. One of them belonged to Helen Gluckman's 80-year-old father, Jan.

"He was squeezing my hand when I was talking to him," she told CBS News. "I think he heard me."

When Jan tested positive for COVID-19, the care home where he lived didn't send him to the hospital. Staff stopped monitoring his oxygen and gave him morphine. He died within days.

"They didn't have any oxygen in the home, so there was nothing that they could do or were doing, so I think it was better [for them] not knowing how bad his condition was. So they just gave him morphine, which kills a person after a while," Gluckman said, adding that if she had known at the time that, "morphine will kill you, because it takes your breathing away, then I would never have accepted it."

Asked by Palmer how health care professionals could act in such a seemingly irresponsible way — essentially not to treating a patient — Gluckman said authorities in Stockholm seemed to decide early on that they weren't "going to treat this bunch of people."

She said without hesitation that she had "lost faith in the government," and in Sweden's public health authorities who have the direct responsibility for determining the country's coronavirus strategy. 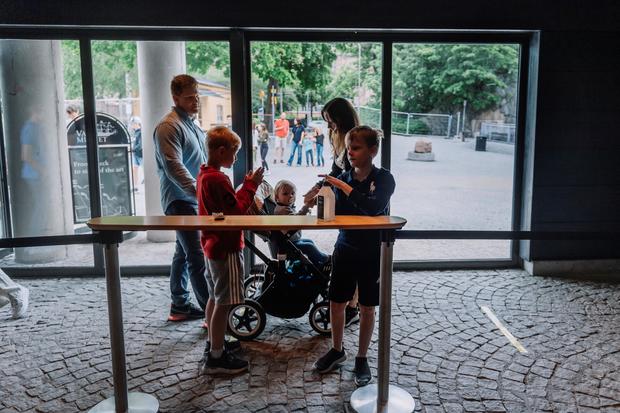 Visitors use sanitizer before entering the Vasa Museum in Stockholm on July 15, 2020 on the day of its reopening amid the new coronavirus pandemic.  STINA STJERNKVIST/TT News Agency/AFP/Getty

With the onset of summer, Sweden's outbreak has finally slowed down. From a peak of more than 100 deaths per day, the country is now reporting daily death tolls in the low teens.

But in a couple months, when the short northern summer ends, people will head back indoors, where the virus could easily explode again. Swedish scientists have called for stricter, more data-driven measures to prevent a resurgence.

National public health director Karin Tegmark Wisell told Palmer, however, that to avoid a potential second wave of infections in the autumn, Swedish officials would "keep up the recommendations" and continue to study evolving research.

So, basically, no changes are imminent.

"If there is one country in Europe where there will be a second peak, it will be most likely Sweden, because they're still not doing that much to really stop it," she said.

Porto signed Portuguese goalkeeper Ramos
Ferdinand on the Golden ball: If I were Levandovsky, I would create a petition. It's cruel
Bernardo Silva on the Champions League: Liverpool are out, Real Madrid are out, but it won't make our path any easier. Everything can happen
Arsenal are outraged by Ozil's Interview. The player defended his decision to refuse a pay cut
Juventus is Interested in Gozens. Atalanta wants 30-35 million euros for the defender
Sabitzer about 2:1 with atlético: Leipzig didn't want to go home. We are determined to stay in Lisbon until the end
Simeone on relegation from the Champions League: there Are no excuses. We couldn't play the way we wanted to
Source https://www.cbsnews.com/news/sweden-covid-coronavirus-deaths-make-sweden-example-of-how-not-to-deal-with-covid-19/