On Tuesday, the senator said he and his family faced heavy criticism after they decided to take a warm vacation while Texas residents suffered frigid temperatures and power outages, per People.

“Here’s a suggestion: just don’t be a——-,” said Cruz in regards to who leaked the messages. “Like, just, you know, treat each other as human beings have some degree, some modicum of respect.”

“I will say Heidi’s pretty pissed at that,” said Cruz, 50, in regards to his wife, 48, on Ruthless, a political podcast.

The messages from a neighborhood group chat were initially obtained by a local Texas outlet and proved that the trip was a family affair to escape “FREEZING” temperatures. When Cruz returned home, he admitted the trip was a mistake.

“Whether the decision to go was tone-deaf — look, it was obviously a mistake,” he said to reporters. “In hindsight, I wouldn’t’ve done it.” 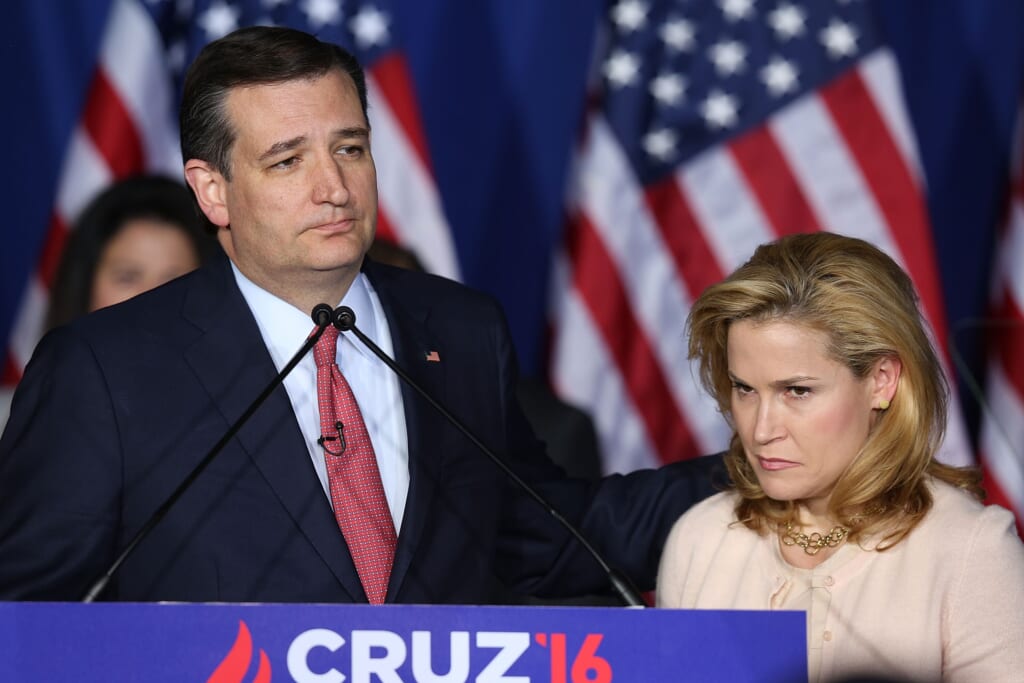 INDIANAPOLIS, IN – MAY 03: Republican presidential candidate, Sen. Ted Cruz (R-TX) announces the suspension of his campaign as wife Heidi Cruz looks on during an election night watch party at the Crowne Plaza Downtown Union Station on May 3, 2016 in Indianapolis, Indiana. (Photo by Joe Raedle/Getty Images)

As previously reported by theGrio, Cruz received backlash from Hillary Clinton for apparently leaving his dog behind while they were on vacation.

Without explicitly naming Cruz, Clinton tweeted, “Don’t vote for anyone you wouldn’t trust with your dog.” Her statement follows reports that the senator left his poodle behind in the bitter cold as he fled the state for some fun in the sun.

Don't vote for anyone you wouldn't trust with your dog.

Reporter Michael Hardy snapped a photo from outside Cruz’s Houston home, in which the family dog Snowflake can be seen looking through a glass door. After the image went viral, Hardy said a security guard was at the home caring for the pooch, per The Hill.

Cruz swiftly returned to Texas after intense backlash. Hardy noted that the power in the Republican senator’s home was out when his family left for Mexico but came back on while Cruz was gone.

“Snowflake was in the cold for part of a day, but it could well have been longer,” Hardy tweeted.

Keep in mind that Ted has admitted he planned to stay in Cancun until Saturday. The power could well have been off all that time. Getting away from the cold was why they went to Mexico in first place

Cruz released a statement amid the uproar, explaining that the trip to Cancun was only meant to accompany his young daughters.

“With schools cancelled for the week, our girls asked to take a trip with friends. Wanting to be a good dad, I flew down with them last night and am flying back this afternoon. My staff and I are in constant communication with state and local leaders to get to the bottom of what happened in Texas,” the statement read.

Upon arriving back in Texas on Thursday, Cruz critics have been calling on him to resign.

Meanwhile, one pet lover has launched the Twitter account, @TedCruzPoodle, and the bio reads, “Hi! I’m Ted Cruz’s poodle, Snowflake, living my best life while Texas freezes over & my a-hole dad is in Cancun. #Justice4Snowflake #TedFled.”

Stephanie Guerilus and Biba Adams contributed to this report

Ibra will be torn between matches and the festival in Sanremo for a week. 4 musical evenings and 2 matches in 6 days
The champion of China, Jiangsu Sunding, announced the termination of its activities. Inter is owned by the same company
Ex-goalkeeper of the national team of Argentina Cavaliero killed a man
Schalke has sacked head coach Gross and the sports director. The team is last in the Bundesliga
Werner on Chelsea: The period when I didn't score was the worst of my career
Ole Gunnar Solskjaer: You're in the wrong place if you're at Manchester United and you like to lose. I may be the worst loser in the club
Ko vid-masks of the Leopard are recognized as the best in Spain. Efficiency - 94%
Source https://thegrio.com/2021/02/23/ted-cruz-wife-heidi-cruz-leaked-text-messages/

24 masks and face shields to protect yourself during COVID-19

U.S. is ‘gravely concerned’ by reports of abuses in Ethiopia

Cincinnati vs. Memphis line, prediction: Take the Under

UN warns of mass famine in Yemen ahead of donor conference

My family has no idea all our money comes from adult websites.

Dear Care and Feeding: My Grown Children Want Nothing to Do With Me

Spain: Shipload of cattle to be killed after 2 months at sea

A Race To Protect His Country — And His Mother

It's Not Just Texas. The Entire Energy Grid Needs An Upgrade For Extreme Weather

A Chapter In U.S. History Often Ignored: The Flight Of Runaway Slaves To Mexico

When the Left Attacked the Capitol

In 'Girlhood,' Teens Across The Globe Write About Their Everyday Lives

'What are you?' How multiracial Americans respond and how it's changing

Biden brings back bipartisan meetings at the White House

Charlie Crist is eyeing a run for governor again. Florida Democrats might not care.

Elsa and Olaf? Characters from the movie 'Frozen' could serve as hurricane names this season

Snow, severe weather and flood threats across the Eastern US

Fact-check: Vegetarians don't get enough proteins is a lie [details]

What Learned About Ourselves In the First Year of the Pandemic

Why the very conservative bloc is so important to Trump

Where are Mexico's disappeared? Many have been in government graves all along

Why Republicans Are Moving To Fix Elections That Weren't Broken

Op-Ed: The U.S.-Taliban peace deal only whetted the insurgents' appetite for more violence

Andrew Cuomo's Bullying Has Finally Caught Up To Him

At Least 5 Dead in Bloodiest Day of Myanmar Coup Protests

Yankees’ DJ LeMahieu not resting on his laurels

When and where to get COVID-19 vaccine in Bengaluru; 18 private, 5 govt hospitals assigned

It's the US' deadliest avalanche season in years. Experts say Covid is partially to blame

Fact check: No, Rahul Gandhi jumping in sea video was not pre-planned

Avril Haines Takes Over As Intelligence Chief At 'A Challenging Time'

Actress Sarah Culberson discovers she's a princess while searching for birth parents: 'It was overwhelming'

The Golden Globes are usually a boozy party. This year's show could have a different vibe.

Why it's time to take pro-Trump secession movement seriously

What's next for Wisconsin Republicans? Ron Johnson holds the key

At least 5 dead as Myanmar police intensify crackdown on protests