Republicans say the legislation includes new measures that would lead to better election security, while Democrats argue it will suppress voter access, especially for those minority communities.

Lawmakers were set to vote on the Republican-sponsored election Thursday after Florida’s Gov. Ron DeSantis signed that state’s election bill into law. The State House of Representatives debated the measure with the possibility it would pass and get sent to the Senate, according to reports. 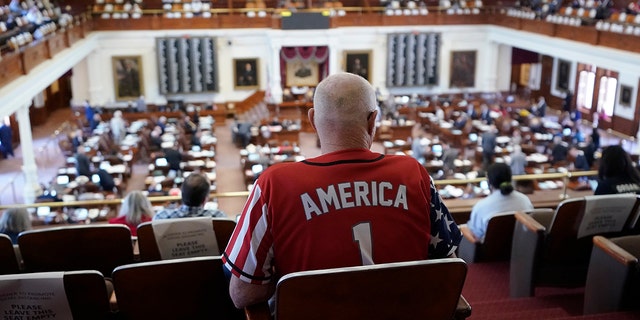 Gerald Welty sits the House Chamber at the Texas Capitol as he waits to hear debate on voter legislation in Austin, Texas, Thursday, May 6, 2021. (Associated Press)

The bill’s author, Rep. Briscoe Cain, said the legislation, would help to protect voters and prevent future election crimes. He said it wasn't in response to the 2020 elections, which he deemed was fair.

"The purpose of this is to make it even more safe and secure," Cain said, according to FOX 4 of Dallas/Fort Worth. "The constitution commands the legislature to pass legislation to attack fraud and to preserve the purity of the ballot box, and I’ve seen a lot of polling suggesting the trust in our elections process is down."

Democrats, however, raised questions about voter suppression and how the bill might have unequal negative effects on voters of color.

"Criminalizing things that could be a simple mistake could be a deterrent to finding poll workers," said Rep. Jessica Gonzalez, a Dallas Democrat and House election committee vice-chair, according to The Wall Street Journal. "I think it’s a terrible piece of legislation."

Cain pushed back, saying he doesn't believe the "bill suppresses any votes," according to the Dallas Morning News.

The legislation would make it more difficult for an election worker to remove poll watchers and would ban public officials from distributing applications for mail-in ballots, the paper reported. It would also increase penalties and place additional restrictions on voters who require assistance – among other things.

Earlier Thursday, Democrats vowed to file more than 100 amendments to fight and limit the impact of the legislation.

"My Democratic colleagues and I have more than 100 amendments," Rep. James Talarico tweeted Thursday afternoon before the battle on the floor kicked off. "We're prepared to fight this all night. Good trouble. Necessary trouble."

Following three hours of debate, the House voted on one, which failed along partisan lines, the Morning News reported.

Texas Gov. Greg Abbott is expected to sign the bill into law.

Help! My Ex-Boyfriend Wants to Pay Me to Go on Dates.

The day that delighted progressives

Dr. Zuhdi Jasser blasts Biden, Sanders for associating with 'Marxists': 'It starts from the top'

Betsy DeVos left Washington 5 months ago. Her legacy is alive and well.

McManus : Why Republicans are suddenly reluctant to condemn political violence

How Republicans Became the ‘Barstool’ Party

Dear Care and Feeding: My In-Laws Think I Play Favorites With My Family

For Anyone Who Has Lost a Dad, Let's Celebrate Their Legacy This Father's Day

Meghan, Duchess of Sussex, didn't see diverse characters in books as she grew up. She hopes 'The Bench' will change that

Covid vaccination: These sections of people hesitant to receive jabs against coronavirus

Remote learning a bust? Some families consider having their child repeat kindergarten

What CNN Underscored editors are hoping to buy on Prime Day

Summer solstice 2021: Sensual traditions on the longest day of the year

How Many Dads Does It Take To Screw In A Lightbulb? Father's Day By The Numbers

Denmark looks to seize chance against Russia at Euro 2020

Restaurants, bars in Delhi to operate at 50% capacity: DDMA

Finland not getting an easy ride from Belgium at Euro 2020

Diplomats to meet in Vienna for more Iran nuclear talks

Over 82mn people displaced in 2020; 85 percent refugees have limited access to vaccines [details]

How India brought COVID vaccines in record time; timeline of important decisions in last one year

Relief is in sight for the Southwest following a stretch of dangerous, record heat

1 person is killed and at least 5 are wounded in an Oakland, CA, shooting, police say

It has been 500 days since the first known US death from Covid-19. Variants and low vaccination rates threaten to prolong the pandemic

Lobster or legitimacy? A key U.S. ally embraces the West — and pays the price with China

Biden wants to bring Amtrak to a Pennsylvania commuter corridor. Will riders support it?

On Father's Day, free your sons from the bonds of an outdated masculinity

Why Americans have started eating bugs

They lost their loved ones to Covid. Then heard from them again

They lost their loved ones to Covid. Then they heard from them again

Man with giant kidneys to have major surgery to remove both