The Case Against Ghislaine Maxwell 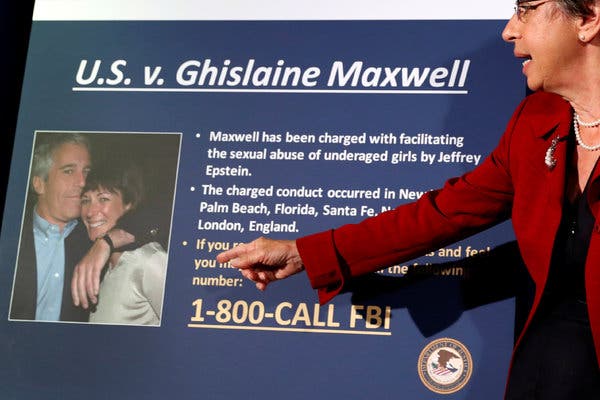 Headlines about the sex-trafficking case involving Jeffrey Epstein, who committed suicide last August in one of the most explosive story lines of 2019, had faded amid this year’s torrent of world-shaking news.

But the Epstein saga has burst back into the public discourse with the arrest of his longtime companion, Ghislaine Maxwell, in Bradford, N.H., this month. She has been accused of helping Mr. Epstein “recruit, groom and ultimately abuse” multiple girls, including one as young as 14, between 1994 and 1997, according to an indictment.

Ms. Maxwell is expected to appear at a court hearing on Tuesday.

[Who is Ghislaine Maxwell? The daughter of a British media mogul whose relationship with Mr. Epstein has raised many questions and, now, criminal allegations.]

Ms. Maxwell and Mr. Epstein began dating after she moved to New York in 1991. She began spending time at his estate in Florida, entertaining prominent visitors from around the world.

Lawsuits have long accused Ms. Maxwell of managing a network of recruiters to entice young girls and women into a trafficking scheme run by Mr. Epstein.

Still, Ms. Maxwell remained in prominent social circles for years. In 2013, for example, she was pictured alongside Michael R. Bloomberg, then the mayor of New York, at a book party.

Ms. Maxwell befriended victims and established a rapport with them, and would “normalize sexual abuse” by undressing in front of them or talking about sexual topics, according to the indictment in federal court in Manhattan.

The indictment also said Ms. Maxwell was sometimes present when Mr. Epstein sexually abused girls, which “helped put the victims at ease because an adult woman was present.”

Ms. Maxwell also participated in some of the abuse and lied about her conduct when questioned under oath in 2016 in a lawsuit, the indictment said.

She is charged with six counts, including perjury and enticing a minor to travel to engage in illegal sex acts.

How exactly investigators closed in on Ms. Maxwell and gathered enough evidence to bring the charges is not clear.

But an F.B.I. official said that for the past year, the authorities had been tracking Ms. Maxwell’s movements and had recently learned about her relocation to a home in New Hampshire. The authorities have said she was hiding there.

She switched her email address and registered a new phone number under the name “G Max,” prosecutors said. They said she ordered packages using a different person’s name for the shipping label.

We have not heard much from Ms. Maxwell’s side since her arrest.

But in a court filing last week, lawyers for Ms. Maxwell wrote that she “has always vehemently denied that she was involved in illegal or improper conduct related to Epstein.”

The lawyers sought to distance Ms. Maxwell from Mr. Epstein, and pushed back at the notion that she had been hiding from the authorities.

Instead, the lawyers said Ms. Maxwell was trying to protect herself from “unrelenting and intrusive media coverage.”

The lawyers asked a federal judge to release Ms. Maxwell from jail on $5 million bond, arguing that she did not pose a flight risk.

Like many New Yorkers, I often leave the city for nature breaks in the summer. But this year, with the pandemic and the constant stream of alarming information that can overload the senses, I’ve even been skipping the walks I love to take in Woodside, missing out on my neighbors’ Instagram-worthy gardening.

So instead of waiting outside the doctor’s office, I explored the streets of Rego Park: They were quiet, and I felt my mind calming.

That’s how I noticed that the landscape was amplifying itself — like uncut hair that says, “I’ve been working from home.” Flowers were popping up, impatiens and marigolds, and there was a giant shrub with white blossoms and a fragrance I stopped to take in as a bumblebee kept its social distance.

Becoming more aware of my surroundings, I saw a tree with small white flowers — a linden, very common in the city. Then I caught sight of The Cherries. Wow. It seemed as if Bob Ross had painted his “happy trees” everywhere on one block, only with bright red cherries and yellow-orange ones as well. In the middle of this lush scene, I suddenly felt centered and safe — hugged.

A lot of Queens neighborhoods sound green — Bayside, Forest Hills, Fresh Meadows — reminding us that nature has always been here for us.

Now my goals for this summer are more focused and cherry-tree inspired: No matter what’s going on, find ways to grow. Let’s go! Happy summering.

Metropolitan Diary: Train to the Bronx

I was just starting out as a lawyer and was to make my first court appearance in the Bronx. Having grown up in Brooklyn, I knew my way around that borough and Manhattan by train. I was less familiar with the lines that ran to the Bronx.

A friend in my office offered some advice.

“Take the Lex, but don’t get on the wrong train,” he said. “You want to go to Yankee Stadium. Just remember it’s Lou Gehrig’s number.”

I went to the subway station and got on a 5 train when it pulled in. I immediately began to wonder whether I was on the right train.

I asked one of the other passengers if he knew what Lou Gehrig’s number was.

He said he did not.

“DiMaggio was 5 if that helps you,” he added.

It did. I changed trains at the next opportunity.

Mbappe got into PSG's yawn for the match with Atalanta in the Champions League
Guardiola again played against Madrid without strikers. Zidane did not find an answer
Gattuso on the match with Barca: Napoli will climb Everest
Lampard about the game with Bayern Munich: the History of the games, when everything changed. Chelsea needs to be trusted
Zinedine Zidane: I am the coach of Real Madrid until something extraordinary happens
Varan on relegation from the Champions League: This is my defeat. It is a shame for the partners
Guardiola on the conversation with Zidane: He congratulated me on La Liga and asked about my family. I hope one day we can have dinner and talk about everything
Source https://www.nytimes.com/2020/07/13/nyregion/ghislaine-maxwell-jeffrey-epstein.html

The Latest: France set to launch aid conference for Lebanon

At least 8 soldiers dead in blast outside Somali army base

Tuscany brings back 'wine windows' used during the plagued

Huawei: Smartphone chips running out under US sanctions

Show of solidarity after blast as Lebanon braces for protest

Yankees got clear reminder these Rays won’t go away easy

Can the Takuba Force Turn Around the Sahel Conflict?

Bison, other beasts return life to a former Soviet army base

Treasure hunt gone wrong: One killed after a portion of 600-year-old temple collapses in Karnataka

Inside the final resting place of Tutankhamun's treasures

Is France helping Lebanon, or trying to reconquer it?

How fantasy baseball owners can steal some points

Chinese golfer's cap prompts questions about the US President

Trump, TikTok and a dangerous precedent for democracy

Liberty get first win with 74-66 victory over Mystics

A father, a sister, a son: Beirut blast takes a heavy toll

She Still Loves It: Inside Camila Cabello's First Year As Shawn Mendes' Señorita

NRA's 'From Our Cold, Dead Hands' Attack On Shutdown Threat Does Not Go Well

American version of ‘Eurovision’ contest coming to US in 2021

Americans are moving around too much and taking coronavirus with them, expert says

Two children and three adults killed after someone set a Denver home on fire and fled, police say

NASA to remove offensive names from planets and other heavenly bodies

Greek Island Locks Down as COVID-19 Infections Soar Across Country

This one small thing can radically impact your productivity

Remains of 7 Marines, 1 sailor recovered off California after training mishap