The Lebanon Explosions in Photos

The two explosions that ripped through Beirut Tuesday evening killed at least 70 people and wounded thousands more. The second, far larger blast devastated a wide area, with the shock wave knocking people down, overturning cars and enveloping much of the center city in a cloud of dust and smoke. Windows of apartment towers miles away were blown out, leaving the city’s streets looking as if they had been “cobbled in glass,” according to a resident.

The injured, at least 3,700, were soon streaming into local hospitals, often arriving on foot or carried by friends and family members, with streets made impassable to cars and local ambulance services overwhelmed. St. George Hospital in central Beirut, one of the city’s biggest, was so severely damaged that it had to shut down and send patients elsewhere. “Every floor of the hospital is damaged,” said Dr. Peter Noun, the hospital’s chief of pediatric hematology and oncology. “I didn’t see this even during the war. It’s a catastrophe.”

The government said “highly explosive materials” had been stored where the explosions occurred, in Beirut’s northern, industrial waterfront, with many hospitals, mosques, churches and universities nearby. As of Tuesday night it remained unclear if the blasts were the result of an accident or an intentional attack.

Lebanon’s government had already been facing large protests over an economic collapse, mismanagement and corruption. “Those responsible will pay a price for this catastrophe,” said Prime Minister Hassan Diab. “This is a promise to the martyrs and wounded people. This is a national commitment.”

Whatever the cause, the explosions stirred memories of Lebanon’s 1975-1990 civil war, and its aftermath, when bombings and other attacks were a regular occurrence. For all its economic and other woes, Beirut had been relatively peaceful in recent yearsbefore Tuesday’s blast shattered much of the city. 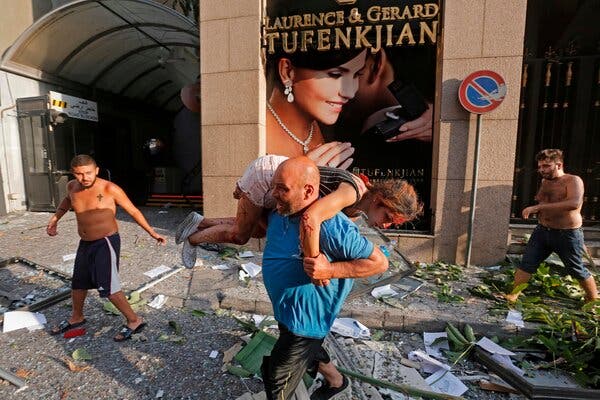 Aiding a victim of the blast in the center of Beirut.

The scene in the aftermath of the explosions at the port.

Injured people were rushed from the scene to overwhelmed hospitals that sometimes had to turn patients away.

Damaged buildings near the port.

A victim arriving at a hospital.

Firefighters trying to extinguish the blazes that followed the explosions.

Evacuating an injured sailor from a ship docked near the explosions.

Some victims were carried to medical facilities. The blasts reminded many in Beirut of the worst days of Lebanon’s civil war.

A destroyed silo at the port.

It's time to learn the names of new Borussia heroes. Now there are 17-year-old boys making goals
Paulo Fonseca: it's Important to bring Smalling back to Roma. We have only 3 Central defenders
Arteta about 2:1 with West ham: Arsenal made life difficult for themselves with losses, but they fought and believed in victory
Palace midfielder Townsend: Could have beaten Manchester United with a bigger difference. We had moments
Philippe Coutinho: I am motivated and I want to work hard to make everything work out well on the pitch
Torres on Chelsea: I Thought I could remain a top player, but I was unstable. Although there were enough successes
Neville on the broken penalty against Manchester United: an Absolute disgrace
Source https://www.nytimes.com/2020/08/04/world/middleeast/beirut-lebanon-explosions-photos.html

Ex-Panthers Spanish radio announcer, who tweeted on QAnon, says he was let go over Trump support

Alexandria Ocasio-Cortez reflects on Ginsburg’s legacy and says Biden should hold off on a list of judges.

Felicity Jones, who portrayed Ruth Bader Ginsburg in 'On the Basis of Sex,' pays tribute to late justice

Daniel Jones needs to take this next step for Giants

Trump says he thinks he'll have a nominee next week

I Was One of Justice Ginsburg’s First Law Clerks. The Experience Shaped My Career and My Marriage

Mets get Jacob deGrom news they were hoping for

Vulnerable GOP Sen. Collins splits with Trump: Wait until after the election to replace Ginsburg

Trump says Supreme Court pick will ‘most likely’ be a woman, announcement could come ‘next week’

Adam Gase under pressure as Jets head into 49ers challenge

How The 'Notorious RBG' Got Her Nickname

Nadal beaten by Schwartzman in 1st tournament in 7 months

How Democrats Could Pack the Supreme Court in 2021

Trump says he has approved a deal for purchase of TikTok

Trump Says Deal Between Oracle and TikTok Has His ‘Blessing’

How Did Ruth Bader Ginsburg Change The Supreme Court?

IPL 13: Maxwell to be eligible for selection for Kings XI's opening game

Nicole Kidman Refused To Perform With Husband Keith Urban For The ACM Awards?

Susan Collins says she opposes holding a vote on a replacement for Ginsburg before the election.

George Floyd To Get Minneapolis Street Section Named For Him

As Trump campaigns, Senate prepares for battle over Ginsburg vacancy

Lindsey Graham Goes Back on His Word, Vows to Vote for Ginsburg Replacement Before Election

Jessica Mulroney Explains Where Her Friendship Stands With Meghan Markle

Ruth Bader Ginsburg To Be Honored With A Statue in Brooklyn, New York

Ginsburg Expected to Lie in Repose at the Supreme Court

Emmy predictions: Who we think will win in 2020

What GOP Leaders Said About Merrick Garland Back In 2016

AP Explains: What’s next with the Supreme Court vacancy?

Susan Collins says Trump can nominate a justice, but Senate vote should wait until after election

How the Supreme Court could now limit abortion rights