The Masked Singer returned for its fourth season Wednesday night, combining with the premiere of the Ken Jeong-hosted I Can See Your Voice to give Fox the victory in the adults 18-49 demographic (Live+Same Day)on a busy night that featured the finale of NBC’s America’s Got Talent and CBS’ Big Brother.

The COVID-impacted fall schedule is still struggling to bring back viewers to broadcast TV during premiere week, with overall TV usage last night down -21% from last year, in line with the declines on first two nights of the season.

Masked Singer, which landed its first Outstanding Competition Program Emmy nom this year, scored a night-leading 1.4 rating in the 18-49 demo and drew 5.42 million viewers for a premiere featuring a tweaked format, virtual audience voting and a new venue owing to restrictions because of the pandemic. This was down double-digits from last season and qualifies as a Live+SD series low in 18-49 and total viewers.

‘The Masked Singer’: Fox’s Rob Wade On How The Mystery Singing Competition Got Back On Stage

The celebrity competition show served as a launchpad to I Can See Your Voice (1.1, 4.46M), which looks to be the highest-rated L+SD fall debut in two years among 18-49 and the best unscripted debut in three years (the latter since Ellen’s Game of Games which clocked a 1.7 L+SD demo rating in its December 2017 debut).

NBC won in overall viewers with the season finale of AGT, which also had to modify its production amid the pandemic. An 8 p.m. special (0.6, 5.24M) led into the two-hour live finale (0.8, 6.31M), the latter growing two tenths to end up as the night’s most-watched program, setting season highs in viewers and the demo for a Wednesday edition. The closer also was down double-digits from AGT‘s 2019 finale.

Big Brother (1.1, 4.03M) grew a tenth from its previous episode Thursday (it took last Wednesday off while CBS aired the ACM Awards). That boosted a fresh Love Island (0.6, 1.88M), which grew two tenths from its Tuesday episode. The network’s night wrapped with 48 Hours: Suspicions (0.4, 1.78M).

ABC’s “Wonderful World of Disney” movie showcase returned last night for the first time since June with the network broadcast premiere of Guardians of the Galaxy (0.4, 1.96M), followed by an encore The Goldbergs. 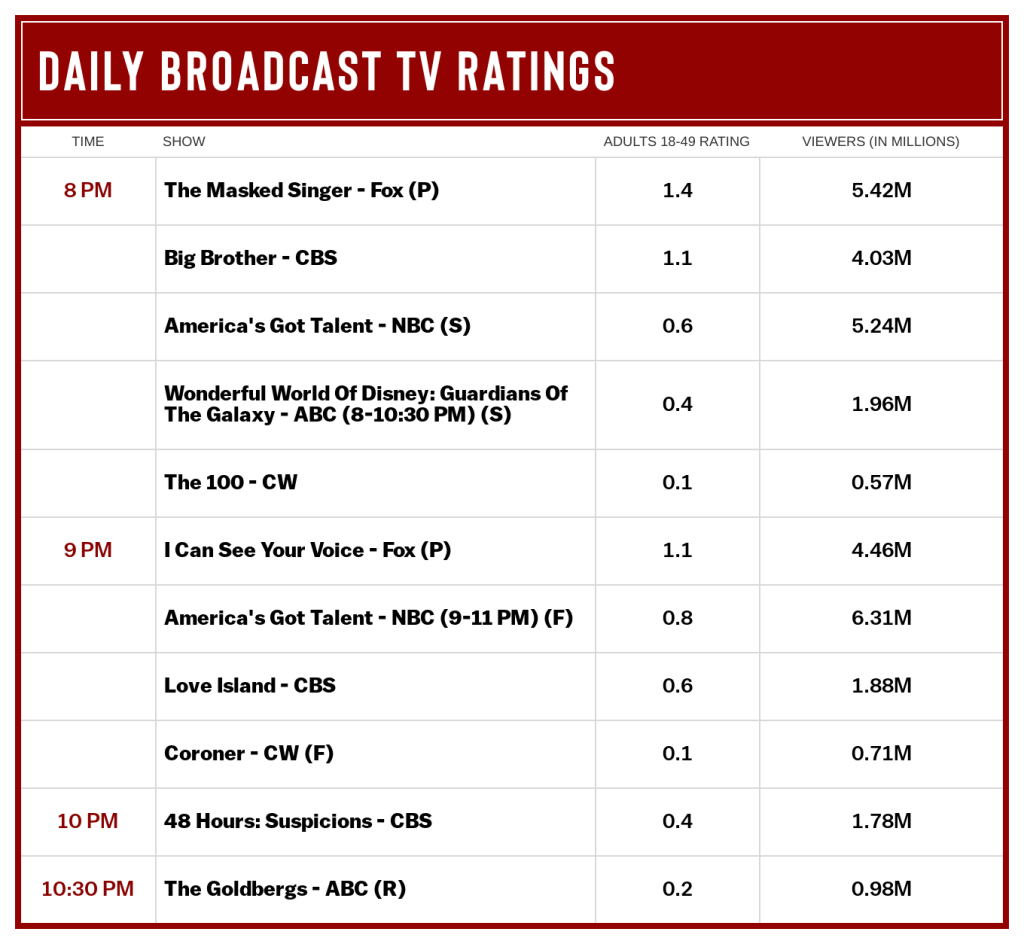 La Liga President on Messi's departure: It won't be a drama for us. And his reputation will suffer
Ronaldo is a fan of the UFC. Rooting for Khabib, training with Conor, signed up for all the top fighters
Only Milan have not lost points this season in the top 5 of the European leagues. Aston Villa lost 0:3 in the
🎮 We made a game about Khabib - fight for him and try to fill up Geiji
Tebas about klasiko: the Game of the best teams in the world. The most important match of club football
Leeds forward Bamford scored a hat-trick. He has 6 goals in 6 Premier League games
Moyes on the spectators in the stadiums: People watch matches in cinemas, why can't they do it on the street?
Source https://deadline.com/2020/09/the-masked-singer-season-4-premiere-tv-ratings-americas-got-talent-finale-i-can-see-you-voice-1234583518/

Stream It Or Skip It: ‘Bad Hair’ on Hulu, a Scary-Funny Satire in Which a Woman’s Weave Goes Wild

2 dead after US Naval aircraft crashes in residential neighborhood: Officials

The Latest: Mexico’s Chihuahua border state back in lockdown

Protesters set up ‘tent city’ outside the Department of Education, demand equity in education

Trump is playing up China's threat to the election. But Russia remains the real danger

‘RHONY’ cast spotted back at work in Greenport post-COVID scare

CNN's Van Jones: Trump 'doesn't get enough credit' for the 'good stuff he has done for the Black community'

Stream It Or Skip It: ‘Stolen Away’ On Netflix, Where A Father Gets Himself Thrown Into A Colombian Prison So He Can Find His Daughter

Who has the best mullet in America? 10 kid finalists compete for the hair-raising honor

‘This Is Us’ Creator Dan Fogelman Explains Why Season 5 Had To Premiere Before The Election As Team Talks COVID, Black Lives Matter & Kevin-Randall Rift

Kamala Harris makes her final case to 'the ATL'

Trump’s Economy Was Never So Great

2020 Holiday TV Content We Are Way Too Excited For

Trump says he now identifies as a non-denominational Christian

Team Penske pulling out of Supercars after successful run

Trump is playing up China's threat to the 2020 election. But the evidence shows, Russia is the real danger

Trump is playing up China's threat to the 2020 election. But the Kremlin remains the real danger

Stream It Or Skip It: ‘Barbarians’ on Netflix, a German Quasi-Historical Action-Drama Series in Which People Kill and Have Sex With Each Other

Review: 'Lupin III: The First' is a fun 3DCG adventure where an anime icon beats up Nazis

US Navy aircraft crashes in Alabama, setting a home on fire