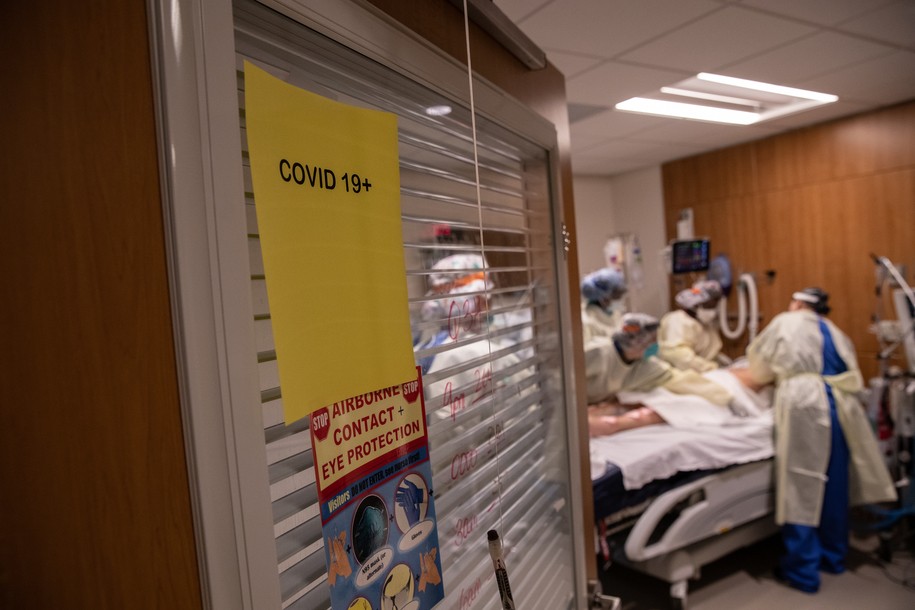 There's one country in the world that relies primarily on employers to provide health insurance to the bulk of its population, with about 160 million people getting their coverage from their job. And boy, does a pandemic show why the rest of the developed world didn't follow that model. Because that 160 million was a pre-coronavirus count. With some 40 million people having filed unemployment claims from March to May, clearly there's a problem: no jobs, no job-based insurance.

The Common Wealth Fund surveyed 2,271 adults across the nation from May 13 through June 2. They asked about job status for the respondents and their spouses as applicable, and what their current insurance status was. Among the people who had lost a job or had a spouse who'd lost a job, two out of five had their health coverage through work, and one in five of those people were now uninsured. So, yeah, a mass unemployment event like a pandemic means lots of people become uninsured.

That's just one problem with the employer-based, profit-centered system. There are plenty of others that we've been talking about as a nation for decades now. One is job-lock—sticking where you are to keep coverage. Another is suppression of wages, because as health care costs continue to rise for employers, money that would be going to increased wages has gone to health insurers, though costs have also been passed on to employees with higher and higher deductibles and out-of-pocket costs. No one is saving in this system, though costs have been held down some with the Affordable Care Act (ACA). Not enough, however, to make it worth preserving in the long run. There's simply no rationality to this current system. There’s just the fact that this is how it's been done for the past three-quarters of a century. That irrationality is highlighted in a situation such as the coronavirus epidemic.

Consider this story from The New York Times’ Sarah Kliff. Austin residents and friends Pam LeBlanc and Jimmy Harvey were preparing for a two-week camping and kayaking trip with three other friends this spring, and determined that the responsible thing to do before the trip was to get a coronavirus test. They each got a drive-thru test at the same facility at the Austin Emergency Center. Neither tested positive. Harvey paid for the test in cash—$199. LeBlance used her insurance, which was charged $6,408. The same test, same cotton swabs, same diagnostic tools. Her insurer negotiated the total bill down to $1,128, of which LeBlanc would be responsible for $928. She reached out to a local television station, which did a story on the two tests. That got the attention of her insurer and resulted in her bill being dropped entirely. "I assumed, like an idiot, it would be cheaper to use my insurance than pay cash right there," LeBlanc said. Because that's what insurance is supposed to mean for you.

The utter arbitrariness of how much any given procedure or treatment is going to cost is yet another ridiculous element of our current system this pandemic is highlighting. So is the price gouging. Patients for Affordable Drugs, an advocacy organization that is agitating for just that—affordable drugs—just issued a new report showing that pharmaceutical companies have raised the prices on 245 drugs since the first coronavirus case in the U.S. was announced on Jan. 20. Of course that includes 61 drugs that are being used to treat the disease, and another 30 that are in clinical trials. The price of the sedatives, steroids, blood pressure medications, and blood thinners that are being used by intensive care units—44 inpatient drugs that are commonly used in total—has been increased.

"It's outrageous, but not surprising, that against the backdrop of the COVID-19 pandemic, drug corporations have continued to raise the prices of drugs critical to keeping Americans healthy and alive," Patients for Affordable Drugs founder David Mitchell said in a statement. Mitchell is also a cancer patient. "Patients are hurting from this pandemic with widespread unemployment, insurance loss, and heightened risk for COVID-19," he continued. "More than ever we all need to be able to afford our medications."

If Trump doesn't kill us all in this pandemic, we have to come out the other side committed to ending this irrationality. Because it's going to totally bankrupt those of us who are left.

Thomas Tuchel: If both legs were intact, you could have seen my 40-meter sprint
PSG saved Tuchel's pet: Choupo-moting got everyone for free, managed not to score from a centimetre, and now pulled Paris to the semi-finals of the Champions League
Gian Piero Gasperini: The worst part is that we were so close. I can only thank the guys
Neymar was the player of the match Atalanta-PSG. He gave an assist
ПС PSG suffered through the entire quarter-final and turned it over in 149 seconds. Lifted the Italian curse and went so far in the Champions League for the first time in 25 years
ПС PSG's pain was transformed into happiness: in three minutes, the suffering stars turned into celebrating kings
The club from Italy won't win the Champions League for the 10th year in a row. This is an anti-record
Source https://www.dailykos.com/stories/2020/7/4/1957051/-The-obvious-lesson-of-COVID-19-We-need-Medicare-for-All

Bob Woodward's new Trump book, 'Rage,' due out next month

Complaints as medical waste piles up outside Mexico hospital

Joe Judge finally gets full Giants team on the field

Sam Darnold has been staying away from In-N-Out

Wojo: Big Ten football in trouble if other conferences play on

Touting Kamala Harris as a moderate is a liberal dose of deception: Devine

AMC plans to open about two-thirds of U.S. theaters by September 3

From Google to garbage disposal: the environmentalist cleaning up India's lakes

'The kids are in shock': Family says 6 children were home when Florida woman was fatally shot by ex-boyfriend

Trinity Hospital reopening labor ward as Mercy plans to close, but South Side women are still stuck in a birthing ‘desert’

Did Meghan and Harry buy in Montecito? Sources point to $14.65-million estate

Pennsylvania man confesses to killing both mothers of his children, police say

Fact Check: At briefings, Trump is settling into a routine of false claims and exaggeration

Go Inside Kylie Jenner's Tropical Getaway for Her 23rd Birthday

Richard Fowler: Biden-Harris will appeal to centrist and multiethnic voters, opening American Dream to all

Richard Fowler: Biden-Harris will appeal to emerging electorate, opening American Dream to all

Dallas superintendent wants teachers to return to classrooms this fall, with or without students

The Latest: Virus cases slow in China, but up in Hong Kong

WHO Appeals for $76 Million to Help Lebanon

Raptors rally past Sixers to give Griffin a coaching win

In 2009, CNN boss Jeff Zucker praised Kamala Harris as 'important' to the country

Score up to 70% off at the Madewell Secret Stock Sale