This South Los Angeles business is weathering the pandemic, one pie at a time

The bakery on this bustling corner in South Los Angeles was born the year the U.S. Supreme Court ruled that segregation on public buses was unconstitutional. The sign on a lamppost tells people who walk by: “27th Street Bakery Shop; Est. 1956.”

Inside the bakery — known for its homemade sweet potato pies — are remnants of a distant past juxtaposed with modernity: a black Blodgett oven and cash registers from the 1950s sit behind a credit card chip reader; on a wall hang framed photos of awards, accolades and newspaper clippings from 1980 to 2018; two radial phones perch atop a pastry display case.

And nearby and everywhere, it seems, are reminders of the all-too-present deadly virus lurking all about: plexiglass barriers surround the register; a sign below reads, “Protect Yourself and Others from COVID-19.”

COVID-19 has brought plenty of hardships to small businesses like this bakery on the corner of Central Avenue and 27th Street. In South L.A., business at cafes and restaurants plummeted by up to 70% by the end of March. Across the country, Black-owned businesses have been disproportionately affected by the pandemic. According to a university study published in May, 41% of Black-owned businesses shut down between February and April, compared with 17% of white-owned ones. Experts attribute the disparity to less access to capital, including Paycheck Protection Program loans, a lack of support from banks and funding disparities exacerbated by the pandemic.

So being around for 64 years and counting is something to be proud of.

At 27th Street Bakery Shop, sales sank when 50% of the mom-and-pop shops they supplied pies to closed. Those that stayed open slashed their orders in half. Grocery store panic buying was rampant, so ingredients were hard to come by. 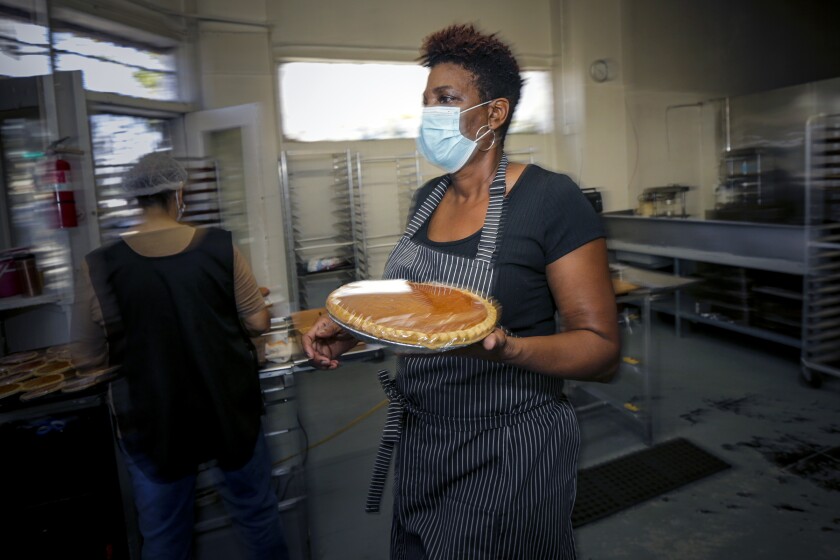 Jeanette Bolden-Pickens, owner of 27th Street Bakery Shop in South L.A., prepares pies. The bakery was founded by her grandparents in 1956.

“I remember going to three different stores in one day to look for supplies,” said Jeanette Bolden-Pickens, 60, the bakery’s owner. “I would wake up early in the morning and go to the store. If you woke up any later you couldn’t find anything.”

Even then, waiting in line for hours didn’t guarantee you’d snag what you needed. Demand was high, and stores limited how much of one product customers could buy. Eggs were so scarce that Bolden-Pickens went searching for them beyond county lines. She dispatched her sister and a friend to Riverside — a 90-minute drive — to an egg farm to fetch some.

“When we could find something, the prices had nearly tripled,” said Bolden-Pickens through a blue mask.

Even as the bakery and its employees dealt with one pandemic-induced blow after another, other curveballs made life — and work — harder. The bakery’s pie press machine broke down.

“We were resuscitating it every time, giving it CPR and it just got worse and worse,” Bolden-Pickens said. 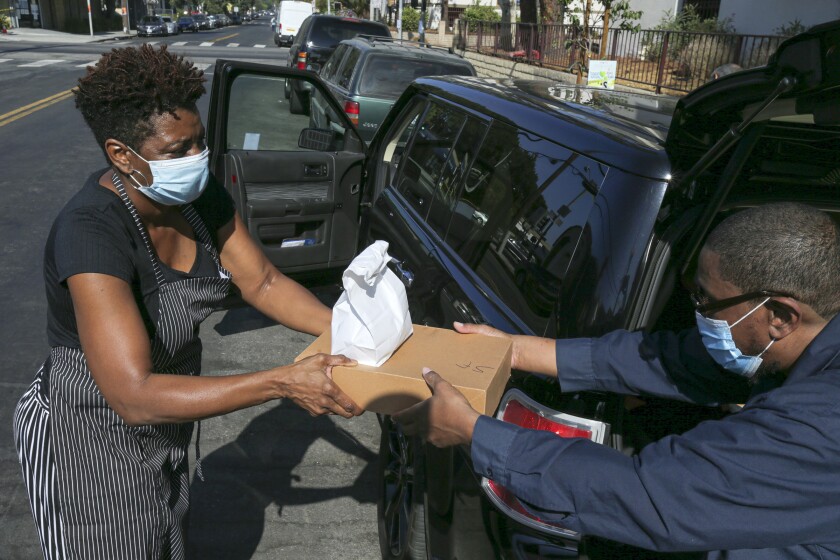 But just when things began to feel disheartening, some luck: After successive failures, the bakery finally got a $10,000 PayPal Empowerment Grant — part of a $10-million grant program for Black-owned businesses in partnership with the Assn. for Enterprise Opportunity. Bolden-Pickens used the money to buy a shiny new pie press machine. It allowed the bakery to produce twice as many desserts and came just in time for the launch of vegan and sugar-free sweet potato pies and the holiday-season rush.

“We all have one goal: to pump out as many pies as we can,” Bolden-Pickens said. On Thanksgiving eve, the shop expected to make 900 to 1,400 nine- and five-inch pies. This year, with large family gatherings out of the question, more people are ordering smaller pies.

Through it all, the community has had her back. Orders in April increased when small businesses were being left out of federal financial support. Once, a woman even bought a $2.25 pie and left $100; she didn’t want her change. That support has helped the bakery stay open. Still, with coronavirus cases surging again and normality still a distant dream, the future feels tenuous.

Harry and Sadie Patterson, Bolden-Pickens’ grandparents, moved from Louisiana in the 1940s to Central Avenue, the heart of Black L.A. It was a cultural oasis, home to landmarks such as the Dunbar Hotel and the Downbeat, which hosted Black jazz luminaries including Nat King Cole, Charlie Parker and Dinah Washington.

The couple steadily nourished a loyal base of sweet-toothed customers hungry for their cakes, cobblers and sweet potato pies. In time, the business evolved from a restaurant to the bakery it is today, establishing itself as a household name in Black L.A. It now supplies pies to local mom-and-pop shops and stocks the pie shelves of supermarket chains such as Ralphs and Smart & Final.

In 1980, Alberta Cravin and Gregory Spann, Bolden-Pickens’ mother and brother, took over the business and with it came a slew of challenges. After the 1992 L.A. civil unrest erupted, 27th Street Bakery Shop hit rock bottom. Small businesses the bakery supplied pies to had been burned down. Half the businesses’ commercial customers evaporated. But the family persisted.

As a teen and then a young adult training as a track-and-field athlete who would eventually win the gold medal in the 400-meter relay in the 1984 Summer Olympics in L.A., Bolden-Pickens helped at the bakery.

In high school, friends would often tease her. 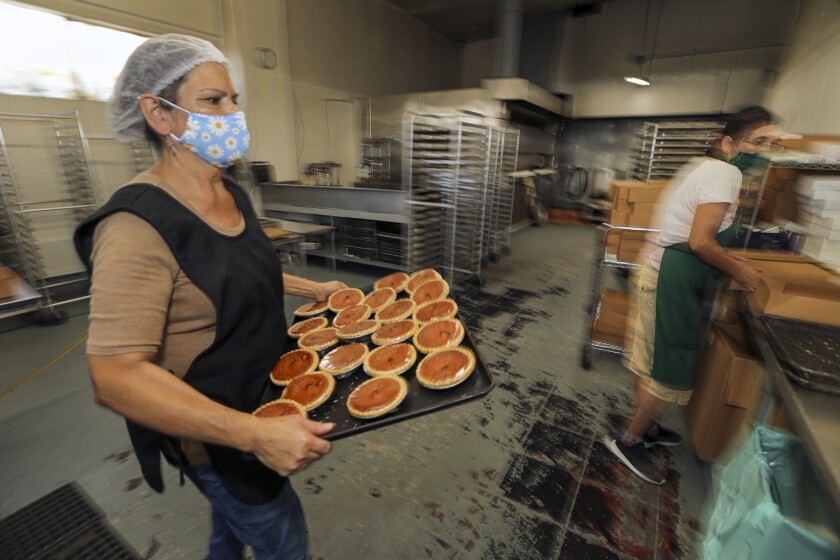 “‘Remember when you used to pick us up in your mother’s station wagon with pies rolling around in the back seat on our way to track practice?’” Bolden-Pickens recalled a friend saying. Her mother had made a pact with her: If she wanted to drive the car to track practice, she had to deliver pies.

“I learned that no matter what’s going on in your life, you can achieve your goal, you’re just going to have to focus,” Bolden-Pickens said. “Through the ups and through the downs, you have to stay focused.”

She clung to those lessons years later after a series of family tragedies: Her mother had a stroke in 2001 — the same weekend coach Bolden-Pickens and her UCLA team won a NCAA championship. Then Spann, her brother, died suddenly of pneumonia in 2002. In 2004, her younger brother Lavance was caught in a gang crossfire and shot to death. And in 2007, while Bolden-Pickens was in Japan gearing up for the 2008 Summer Olympics in Beijing, her mother died.

After 25 years of coaching, Bolden-Pickens’ focus shifted toward the bakery. She took it over with her husband and sister.

“We have to keep this going,” she told herself. For the community. For her son and daughter; her nephews, nieces and their kids; and for Armon, her 2-year-old grandson.

Christine Tello had wondered about the bakery across the street from her clinic for a while. On this particular day, she decided to finally pop in.

“I stumbled upon it and thank God I did,” said the 53-year-old Compton resident. She walked out smiling and clutching to her chest a white paper bag with a sweet potato pie and red velvet and German chocolate cakes.

“I know good cakes and pies when I see them,” Tello said, laughing.

Every customer who walks through the doors of the 27th Street Bakery Shop is greeted with a smile. It’s something Bolden-Pickens said her mother, brother and grandparents did.

“We try to make people who come in here feel like this is a part of home,” she said. 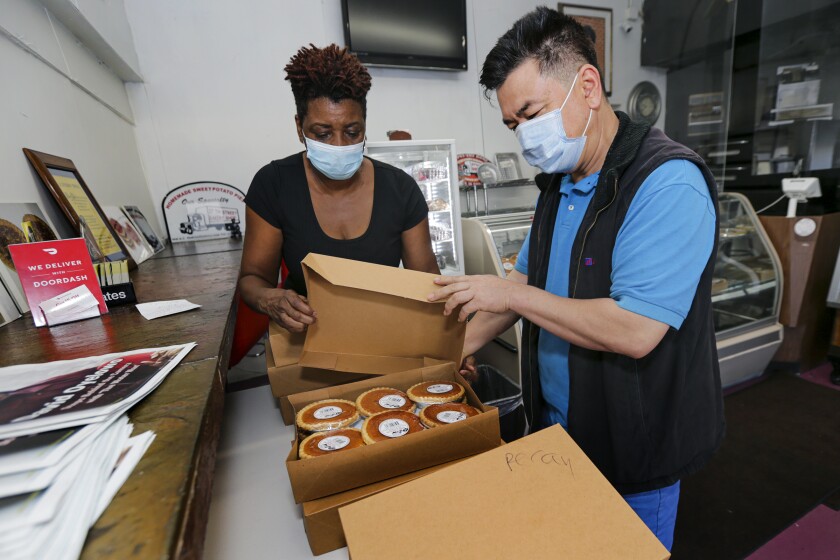 It’s not easy for businesses to survive in normal times. But great customer service makes it easier to do that, Bolden-Pickens said. People remember nice gestures. But tradition also goes a long way. She said the pies are still made the way her grandfather did more than 60 years ago. Only four people know the recipe for the sweet potato pie.

“People are really happy when they come here, and I think it’s because we help them remember when they were growing up,” Bolden-Pickens said. “So many places where you grew up aren’t there anymore. They’ve been replaced by a franchise or an apartment building. But here, you have a taste of tradition.”

Bruno picked up 4 Player of the Month awards in 2020. Ronaldo, Henry and Lampard had the same number-but for a career in the Premier League
Lev - the best coach of the decade in the national teams, Deschamps-2nd, Shevchenko-17th (IFFHS)
Head of the Premier League: We ask players not to hug and change their behavior
Milan had rented the midfielder, Torino Meite until end of season with option to buy
Ramos played on painkillers with Athletic due to knee problems
Barcelona's presidential election is scheduled to take place on March 7
Sir Alex Ferguson: Fortunately, I was retired when I watched Liverpool play in the last two years
Source https://www.latimes.com/california/story/2020-11-25/27th-street-bakery-a-legacy-black-business-in-south-la-weathers-the-pandemic-storm

Orioles have deal with Mancini, swap figures with Santander

Forum to serve as a coronavirus vaccination distribution site

Biden: We’ll ‘manage the hell’ out of feds’ COVID response

Trump has trashed America's most important alliance. The rift with Europe could take decades to repair

It took one busy day to bring back Yankees normalcy: Sherman

Kellyanne Conway Tells Bill Maher People Are Better Off Thanks To Trump; He Tells President, “Pack Your Sh-t And Go”

Mexico clears general, publishes US evidence against him

HHS Secretary Azar rips CNN after report of resignation: ‘I am still here’

University of Maryland settles with Jordan McNair’s family for $3.5 million

Trice’s Big Second Half Pushes No. 9 Wisconsin Past Rutgers

PIA aircraft held back in Malaysia over unpaid dues; no limit to PAK's frivolous spends [Details]

Woman arrested in Capitol attack: 'I listen to my president'

The Latest: Mexico hits another record for COVID-19 cases

Tucker Carlson: Democrats pushing unity through domination of their opponents

WhatsApp Web users must drop everything for this; your phone number could be exposed

Freeland among Rockies to avoid arbitration with 1-year deal