Those Night-Shift Talks Were Easy as Pie

A windowless, fluorescent-lit warehouse, in Wenatchee, Wash., where millions upon millions of cherries — Bings, Sweethearts, Raniers, Tietons — are sorted and graded and packaged each summer, was where the romance between Corena Sharp and Mark Olson began.

“It’s big, it’s cold, it’s very fast-paced,” said Ms. Sharp, now 27, who was a seasonal inspector for the Washington agriculture department in 2015, and had just graduated from Western Washington University when the two met. “You’re never sure what time it is.”

Mr. Olson, now 31, was a year-round employee and the night-shift supervisor, so his job entailed stopping in on each warehouse’s inspector.

“She was very intriguing and so easy to talk to,” he said.

When the season was over in July, and she went back over the Cascades to her family’s home in Kenmore, Wash., they texted regularly, and he eventually concocted an excuse — he was going to buy a new truck in her area — to make the two-and-a-half-hour drive over the mountains to visit her.

The two met in a park, and walked around a bit before getting back to his new vehicle, a black Ford F-150. They shared a first kiss on the tailgate and then parted.

Ms. Sharp was headed to Syracuse University the next day to begin a master’s program in international relations.

“I thought it was going to be the last time we ever saw each other,” she said.

Instead, they began texting every day, and soon the texts turned into phone calls, and then the phone calls became video calls. It was over one of those calls that they talked about what was between them. 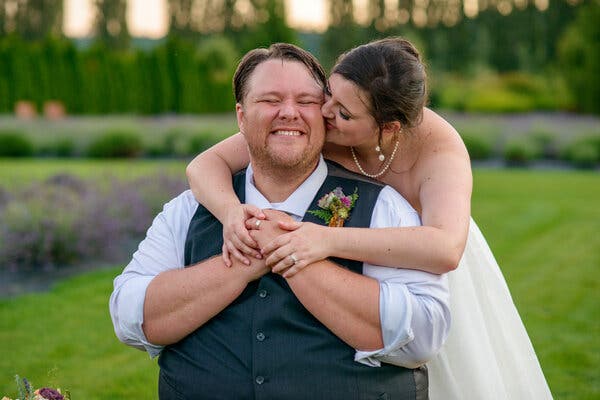 They next saw each other over the holiday break when she had gone home to Washington and ended up having a tonsillectomy.

Mr. Olson, a Minnesota Vikings fan, and the bride’s father, a Seattle Seahawks fan, were on opposite sides of the football game that was on that day. Ms. Sharp was groggy but sentient enough to see that her parents liked him.

“It gave me the warm and fuzzies,” she said. “It sustained me until we got to see each other on spring break.”

She completed her master’s in December 2016 and went directly into the job in D.C. that she now has, as a marketing assistant in the State Department’s recruitment office for foreign service positions.

“That’s when I was, ‘OK. I’m not moving back to Washington state. Do we break up? Or do we move forward?’” Ms. Sharp said. “I didn’t want to do long-distance anymore. We talked about it, and he decided that he would quit his job and move here.”

He did. But he had torn a tendon in his left knee and his physical-therapy schedule kept him from arriving at the 700-square-foot apartment she had in Arlington, Va., so he wasn’t able to move until a number of months later.

“I had already made the big decision to change my life and be with her,” said Mr. Olson, who is now in his second year studying environmental science at George Mason University in Fairfax, Va.

The two had planned a ceremony at the Woodinville Lavender, a wedding venue in Redmond, Wash., and, despite the coronavirus pandemic, they kept their date. With just 12 people attending, the couple were married there on July 25, with Jessica A. Juarez-Wagner, a college friend of the bride’s who was ordained by the Universal Life Church for the event, officiating.

Ralf Rangnick: Havertz - Cruyff of the present day. I don't see any weaknesses in his game
Documentary about Varane nominated for the award of the Rotterdam sports film festival
Two substitute players played for Tuapse. The PFL confirmed the participation of players not included in the application
Jurgen Klopp: Arteta is an exceptional coach. Arsenal have a good balance between defence and attack
The Prosecutor's office of Perugia suspended the investigation of the Suarez exam due to leaks in the media
The rebuilding of the Union stadium by fans is a Berlin legend. Helped other people's fans, worked on December 30 in the cold, the watchman was 80 years old
Candreva moved to Sampdoria. He was presented with a video where he serves Cuagliarella in a restaurant
Source https://www.nytimes.com/2020/08/14/fashion/weddings/those-night-shift-talks-were-easy-as-pie.html

Dog the Bounty Hunter and fiancée Francie Frane are hunting together

Stream It Or Skip It: ‘Secret Society of Second-Born Royals’ on Disney+, a Cruddy Blend of Princess and Superhero Movies

Tigers vs. Royals prediction: Pitching matchup makes Under the play

Why we’re still years away from having self-driving cars

'Great British Baking Show' is becoming an insufferable parody of itself

Frances Tiafoe looks to build on career-best US Open performance

What Does It Take For A Palestinian American Baby To Travel From Israel To The U.S.?

49ers’ Nick Mullens has ‘higher expectation’ for start against Giants

Dax Shepard admits he relapsed with opiates after motorcycle accident: ‘I started to get really scared’

Outdoor Dining in N.Y.C. Will Become Permanent, Even in Winter

The 9 best slow cookers for every purpose and aesthetic — including Crock-Pot, Ninja, All-Clad and more

Here's what you need to know about 'silent' COVID-19

Another NBA Finals await James if Lakers can finish Nuggets

Michigan to give clerks more time to handle absentee ballots

Women are skipping out on motherhood because everything is awful

Rio's Joyous Carnival, The World's Largest, Is Postponed Due To COVID-19

Down But Not Out: Hungary's Journalists React to Shrinking Freedoms

Mail-In Voting Fact-Check: What Is True and False?

What Can We Learn Today From Science and Technology Development in WWII?

Charles Barkley is taking heat for his Breonna Taylor comments

Stream It Or Skip It: ‘A Perfect Crime’ on Netflix, a Documentary Deep-Dive Into an Unsolved German Political Assassination

30 Quinoa Recipes That Go Against the Grain

So you want to lower your rent? Here's how to negotiate

Google To Halt Political Ads After Polls Close, Amid Worries Over Delayed Results

Robert Gore, Inventor of Gore-Tex, Is Dead at 83

White House ordered to have sign language at virus briefings

Cleveland on ‘Family Guy’ to Be Voiced by Arif Zahir