As Tadej Pogacar and Primoz Roglic each took their heads in their hands, seconds after completing Saturday’s penultimate stage of the Tour de France, neither man seemed to be able to process what had just happened.

Pogacar, 21, had just delivered the best performance of his young career, wiping out Roglic’s 57-second lead and opening a most likely insurmountable lead of his own entering Sunday, the race’s final day. The result ensured that he will enter Paris for the traditionally celebratory final stage wearing the leader’s yellow jersey, and positioned him so that he — not Roglic, the leader of the Tour for the past two weeks — will become the first rider from Slovenia to win the race.

Roglic finished fifth in Saturday’s time trial, nearly two minutes behind Pogacar, who earned his third stage win of this year’s Tour by turning in one of the most memorable performances in the race’s illustrious history.

“Unforgettable,” Pogacar said as his emotions overwhelmed him.

Several feet away, Roglic, his good friend, sat on the pavement, speechless and struggling to catch his breath. 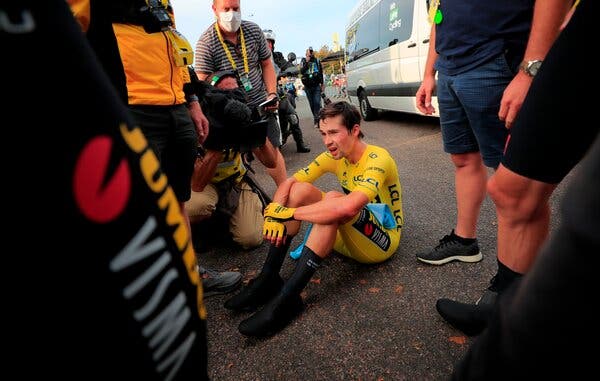 A stunned Primoz Roglic, who had protected and then added to his lead in the final week, collapsed to the pavement after the time trial.Credit...Christophe Petit Tesson/Agence France-Presse, via Pool/Afp Via Getty Images

“I think I’m dreaming,” Pogacar later said. Then he interrupted himself: Roglic had come to congratulate him, and the two hugged. Roglic was crestfallen.

“I didn’t push enough,” he said. “I rode without the power that I needed.”

Pogacar, of team UAE Emirates, is set to become the youngest winner of the Tour de France in the post-World War II era, and the second youngest champion ever. He also leads in the races for the competition’s best climber and best young rider, capping a Tour in which he showed his breadth of skills racing on flat roads, mountain passes and, finally, alone against the clock.

The stage on Saturday capped an impressive duel between Pogacar and Roglic, and turned the tables after Roglic had expertly held off Pogacar’s attacks for more than a week.

Roglic, 30, had led the Tour since its ninth stage, and he never seemed to be threatened. He was backed by his teammates on the Jumbo-Visma team, who maintained a fast pace while protecting their leader at the head of the peloton, riding alongside him as he kept Pogacar from breaking free day after day.

But as Roglic rode alone on Saturday, he crumbled as much as Pogacar shone, and at the end of the stage, their positions had switched: Roglic, who was leading by 57 seconds in the general classification before the time trial, was left 59 seconds behind Pogacar.

“I just went full gas from bottom to the top,” Pogacar said of the final hill of the time trial, where he cemented his victory in the stage. The comment epitomized both his performance on Saturday, and his racing throughout the race’s three-week, pandemic-delayed trip across France.

The duel between Roglic and Pogacar was joined on the hills of the Massif Central earlier this month, but it fully unfolded in the French Alps when the race entered its final week on Tuesday. By then, it had become clear that the winner of the 2020 Tour de France would be one of the two men.

Slovene flags became more present on the sides of the road on the final days, as Roglic and Pogacar kept stalking each other in France’s mountainous landscapes, riding side by side or one behind another but never too far away.

Roglic was one of the race’s favorites since the start, and Pogacar was not an unknown. The winner of the 2019 edition of the Tour of California, Pogacar lit up the Tour de France this year in several mountain stages, winning two of them as he tried in vain to gain time on Roglic.

Yet whenever Pogacar tried to go, Roglic remained positioned right on his back wheel. “I’m doing Tadej no favor,” Roglic said last Sunday, after finishing a few seconds behind his countryman in the 15th stage.

Even as he won stages in the final days of the Tour, Pogacar, right, often found Roglic, in the leader’s yellow jersey, right behind him.Credit...Pool photo by Anne-Christine Poujoulat

The duel between the two Slovenes didn’t start on French roads, though, but at home. In June, Pogacar beat Roglic in Slovenia’s national time trial championship by just nine seconds, a week after Roglic had claimed the national road race title, 10 seconds ahead of Pogacar.

The two then took their cat-and-mouse game to France, and it came in full display in the hills on Stage 13. As Pogacar unseated last year’s winner, Egan Bernal, from the second position in the overall standings, Roglic made clear that he would not let Pogacar cut any further into his lead: He rode right behind him, and the two completed the stage together.

Pogacar said he and Roglic weren’t friends during those final miles that day, and that more rivalry would come. At the time, the two Slovenes were followed by four Colombians in the general classification, and many thought that Bernal, ranking third, could come back.

Two days later, in the 15th stage last Sunday, Pogacar won his second stage, and once again Roglic was on his wheel, not giving him a chance to close the gap in the standings. But they had used that day to drop Bernal, the defending champion who later abandoned the race, and take the reins of the event for good.

“He is unstoppable,” Pogacar had said of Roglic then.

A week later, that word applied to Pogacar.

Klopp on 2:7 from Villa: the Players reacted as I expected. They struggled and won two games
Diego Maradona: Ronaldo and Messi are ahead of the rest. No one can do half of what they do
Bartomeu did not resign at a meeting of the Barca Board of Directors
Del Piero on the Juve-Barcelona match: Pirlo should play 4-2-4
Samuel Umtiti: The last two years have been the worst of my career. I ended up making a complete ass of
Putting together a dream team of the best players in history. Starting with goalkeepers!
Gian Piero Gasperini: Ajax has always been my reference point. Miranchuk is ready to play
Source https://www.nytimes.com/2020/09/19/sports/cycling/tour-de-france-pocagar-roglic.html

How to Paint With Brushstrokes of Confidence

“The Spectacle Can Never Be Trauma”: Nia DaCosta and Taika Waititi on Exorcism Through Art

‘Borat 2’: How Sacha Baron Cohen’s Unsuspecting Targets Feel About Being in the Movie

Odell Beckham Jr. tore his ACL and will miss the rest of the season

McDonald's social media person cries for help: I am more than just the McRib

Key player in war on climate change? The Pentagon

Without Florida, There’s Almost No Path for Donald Trump to Stay in the White House

Early season winter storm could cover many states, from the Southwest to the Great Lakes, in snow or ice

The best dandruff shampoos, according to dermatologists

Diet drinks linked to heart issues, study finds. Here's what to do

Fact check: Trump continues to falsely claim that spike in coronavirus cases is due to heightened testing

You're Not Welcome Here: How Social Distancing Can Destroy The Global Economy

Employee Engagement: How to Get Remote Workers to Care About Your Business as Much as You Do

’60 Minutes’ & Trump Walk Off Soars Up To 17M Viewers; Most Watched Non-Sports Show On TV Since Oscars

Miley, Noah Cyrus release first song together: ‘This moment is so special to us and our family’

‘With Drawn Arms’, The Tommie Smith Documentary, Lands At Starz And A Gets Premiere Date

Book Review: Peter Frampton looks back in a gentle memoir

Should You FedEx Your Mail-In Ballot?

A Malaria Mystery, Partly Solved: What Happens When the Rains End?

Kim Kardashian shows off her bikini body: 'This is 40'

Trump's '60 Minutes' tantrum told us everything

Detroit Schools is released from 11 years of state oversight

The Women the Pro-Choice Movement Left Behind

Low expectations in Mexico as US election approaches

Prince Azim of Brunei Dead at 38

Coronavirus deaths are rising again in the US, as feared

Could 2020 be the highest turnout election in a century?

Kamala Harris: It's Up To DOJ, Not Biden, Whether Trump Gets Indicted

NASA mission finds water on the sunlit surface of the moon

Susan B. Anthony’s headstone gets shield from voter stickers

Moon may hold frozen water in more places than suspected

Lizzo campaigns for Biden in Michigan

The Anti-Catholic Attacks on William Barr

I Have Covid-19 Antibodies. Finally I Know How to Help.

Hell in a Cell: Roman Reigns’ anguished rise is being executed perfectly