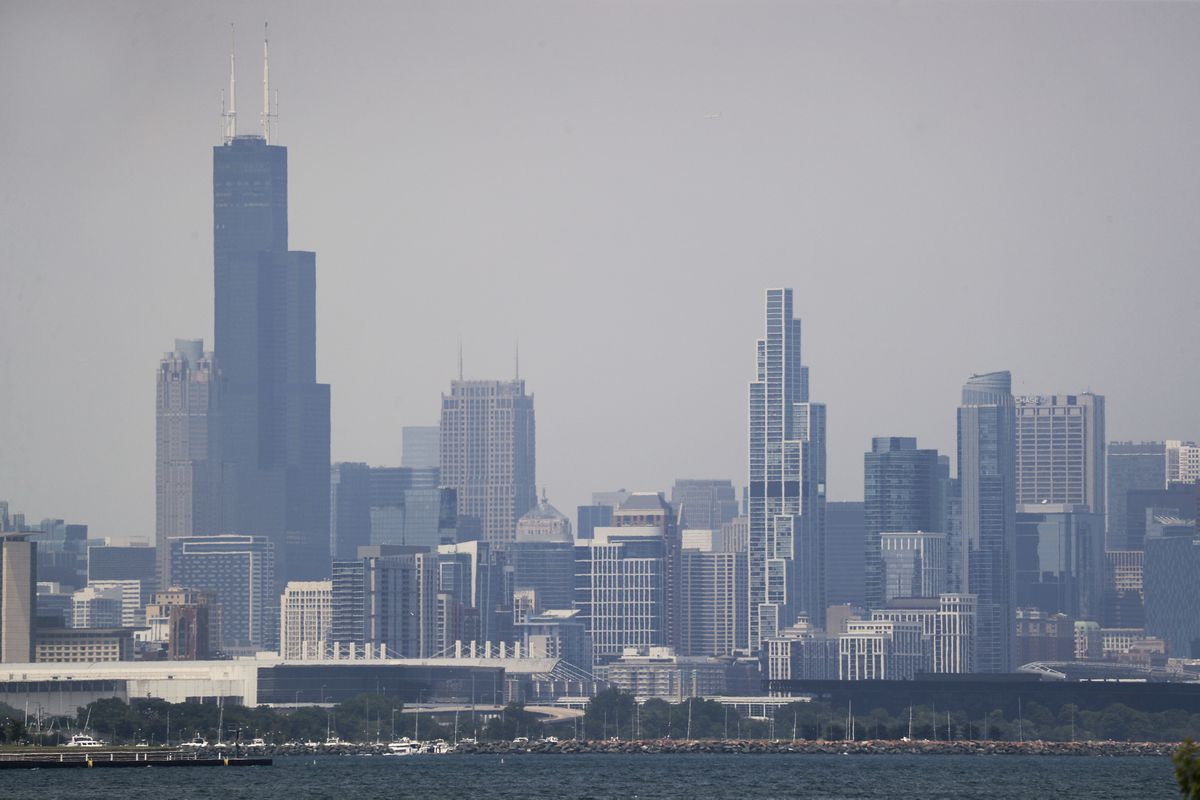 The Chicago skyline is seen on a muggy, hot and humid afternoon on July 9, 2020. (Jose M. Osorio/Chicago Tribune)

Despite evidence that dirty air still endangers millions of Americans with asthma and other respiratory diseases, the Trump administration on Monday declined to tighten national standards for lung-damaging smog.

The decision to retain an Obama-era regulation came less than a week after the Chicago area suffered its longest streak of bad air days in more than a decade.

Business groups lobbied the administration for months to keep in place the latest federal limit on smog concentrations — after saying just five years ago it would bankrupt the U.S. economy.

The announcement marked the second time this year that Wheeler, a former coal lobbyist, rejected pleas from public health experts to redouble the nation’s fight against air pollution.

Though the new group concluded the existing smog standard should be retained, it included an attachment in a February letter to Wheeler acknowledging “legitimate questions about whether the current standard provides an adequate margin of safety for people with asthma.”

“I think this will be troubling to federal courts,” one of the fired advisers, H. Christopher Frey, said in an email.

Frey, a civil and environmental engineering professor at North Carolina State University, chaired a group that advised the Obama EPA before the agency adopted its latest smog standard in 2015.

“The law uses the term ‘protect public health,’ which is understood to err on the side of protection when there are uncertainties,” Frey said. “Administrator Wheeler has used uncertainty as an excuse to do nothing.”

Smog, also known as ground-level ozone, is created when the sun’s heat bakes a mixture of chemicals emitted mostly by car tailpipes, diesel engines and the smokestacks of coal-fired power plants.

Regulating sources of smog-forming pollution is supposed to be grounded in science. But politics often play a role.

President George W. Bush was told in 2007 that the strictest standard under consideration by the EPA would have reduced smog-related deaths by 75%. His administration favored a far less stringent limit, significantly reducing the number of counties required to adopt smog-fighting measures.

A year later, President Barack Obama vowed during his first campaign to update the Bush-era standard, then blocked the EPA’s efforts to follow through on that promise as the White House shifted its focus to Obama’s 2012 reelection campaign.

Trump, meanwhile, has spent the past three years attempting to roll back regulations intended to improve air quality across the nation.

Nearly 214 million people nationwide and 10 million in Illinois live in counties where average smog levels exceed 60 parts per billion — the strictest standard EPA officials have considered, according to a Chicago Tribune analysis of federal monitoring data.

Tightening the standard from the current 70 ppb limit would require Chicago and other big cities to clamp down harder on polluters.

Dozens of smaller cities, mostly in the Midwest, Northeast and Southeast, would be forced to adopt smog-fighting measures for the first time. Many are election-year battlegrounds where the air is considered relatively clean, at least according to the EPA.

“The EPA is ensuring millions of people will repeatedly be told the air is healthy when the agency knows it’s not,” said Brian Urbaszewski, director of environmental health policy at the Chicago-based Respiratory Health Association. “It won’t be protecting at-risk groups like children living with asthma, needlessly causing families more trauma, emergency room visits and hospital stays.”

Like many other Trump-era regulatory decisions, the smog standard almost assuredly will end up in the courts. Even if judges determine the EPA failed to follow the law, it will take years to reach that point, effectively delaying new requirements for industry.

Guillem Balage: Juventus wants to get rid of Ronaldo's salary. It was offered to everyone, including Barcelona
Mbappe thanked the PSG doctors: Don't tell me about the pain
Liverpool presented a turquoise away kit for the 2020/21 season
The President of PSG: Neymar and Mbappe will never go away. They are one of the best players in the world
Thomas Tuchel: If both legs were intact, you could have seen my 40-meter sprint
PSG saved Tuchel's pet: Choupo-moting got everyone for free, managed not to score from a centimetre, and now pulled Paris to the semi-finals of the Champions League
Gian Piero Gasperini: The worst part is that we were so close. I can only thank the guys
Source https://www.chicagotribune.com/news/environment/ct-trump-epa-rejects-tougher-smog-standard-20200713-ulg2oscjufccnlbaaxwe74hofq-story.html#ed=rss_www.chicagotribune.com/arcio/rss/category/news/

Trump calls out Harris, says 'nobody more insulting to Biden' during primaries

Voting focus could be legacy for latest wave of NBA activism

The Three Abductions of N.: How Corporate Kidnapping Works

Meghan Markle was ‘furious’ at ‘problem’ half-sister Samantha for making vicious accusations against her: book

Company offers 'paw-ternity' leave, $300 toward pet-adoption fees to its employees

Why Mike Pence Should Be Worried About Debating Kamala Harris

Worried Lenders Pounce on Landlords Unable to Pay Their Loans

Boing! Amid Retail’s Sag, a Nice Bounce for Mattress Sales

Tucker Carlson: Kamala Harris Will Deny You A COVID-19 Vaccine If You're Not A 'Certain Color'

Sonu Sood and Malaika reveal, 'We did a world tour and performed on Munni Badnaam Hui'

Harris struck Trump in her VP pick debut. Biden needs her to strike a balance.

This dangerous 'party drug' has been everywhere — even on Amazon

A college football season is dangerous and selfish. So of course Trump wants it.

Is it safe to drink from a fountain during the pandemic?

These new bus shelters refuse entry to anyone with a fever

PM Modi launches platform for transparent taxation: How will it benefit taxpayers

New Zealand was acclaimed a world leader in handling Covid-19. Now it's dealing with a fresh outbreak

Follow coronavirus measures or this fall could be the worst for US public health, the CDC says

In the age of coronavirus, these new Seoul bus shelters refuse entry to anyone with a fever

Facebook Takes Steps Against Misinformation Ahead of U.S. Election

Mysterious figure appeared in sun could be an alien message, claims conspiracy theorist

Greece thanks France for pledge to boost forces in east Med

Top Facebook Official: Our Aim Is To Make Lying On the Platform 'More Difficult'

Alexandria Ocasio-Cortez Reunites With Her 2nd Grade Teacher On Twitter

More than 2,000 students, teachers and staff quarantined in several schools

Lefties get their day today

Kareena Kapoor pregnant again: Flashback to the PREGNANCY trends she set back then

‘We Are the Guinea Pigs’: Hollywood Restarts Its Blockbuster Machine

Facebook Will Urge Voting by Mail as Trump Attacks Method

11 names, 120 hours of interviews: Inside the grueling VP search that led Joe Biden to Kamala Harris

Follow coronavirus measures or risk the worst fall in US public health history, the CDC says

DJ LeMahieu belts out another four hits in Yankees’ win

Gliding past Trump's sexist depictions of her as "mean" and "nasty," the senator from California shredded Trump's White House record

Mets’ Robert Gsellman’s return to rotation was a rocky one

Abandoned by state after explosion, Lebanese help each other

Players kneeling for anthem met with boos before MLS game

General election bursts into life in dueling US dreams

After TikTok and WeChat, Alibaba could be the next target in Trump's tech war