Trump Keeps Up Rally Pace and Red State Democrats Want a Biden Visit: This Week in the 2020 Race

Welcome to our weekly analysis of the state of the 2020 campaign.

The week in numbers 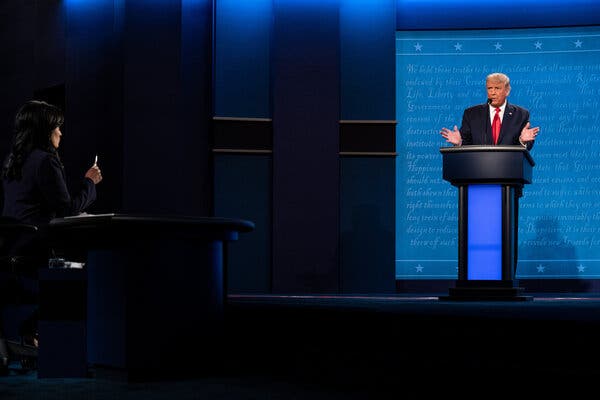 President Trump did what his advisers wanted him to do at the debate on Thursday night, despite his lack of prep sessions: He didn’t interrupt former Vice President Joseph R. Biden Jr., and he toned himself down. But with less than two weeks left in the race, and nearly 50 million votes already cast in the election, the time for a reset that changes the dynamics of a race whose dynamics have not changed much since March is dwindling. The bulk of the conversation on the debate stage was still about the president’s handling of the coronavirus, where he offered little new.

He accepted responsibility for the 220,000 lives lost, while deflecting any blame, all in the same breath. “I take full responsibility, but China brought it here,” he said. “It’s not my fault.” He asserted that “2.2 million people modeled out were expected to die,” a claim he often repeats but for which there is no clear backing. Mr. Trump’s attempts to paint Mr. Biden as both corrupt and a Trojan Horse of the left fell flat (“he thinks he’s running against someone else,” Mr. Biden pushed back at one point). And the issue of law and order that the president wanted to elevate has dwindled in most parts of the country since a summer of protests.

Nearing the end of the race, Mr. Trump has not succeeded in making the election anything but a referendum on himself: his coronavirus response, his tone and his tweets.

In North Carolina this week, Mr. Trump appeared in Gaston County, a reliably Republican county outside of Charlotte that hasn’t had a visit from a general election candidate since President George H.W. Bush stopped there in 1992. In Florida, he visited The Villages, the nation’s largest retirement community that used to be part of his core constituency of older voters. In Wisconsin next week, Mr. Trump is set to visit Waukesha, a county he won four years ago by his biggest margin in the state.

What early voting tells us (and what it doesn’t)

Voters waiting in line outside to enter the polls at the Riverview Branch Library in Riverview, Fla.Credit...Eve Edelheit for The New York Times

It is a misnomer to think of Nov. 3 as Election Day. Millions of Americans have already voted, using methods like early voting or casting an absentee ballot by mail. In fact, amid the continued spread of coronavirus, most experts believe this presidential election will feature more Americans voting outside of the in-person ballot box than ever before.

That reality has led to some eye-catching early vote totals in several states. However, projecting early vote counts onto Election Day results has been a pitfall of election analysis for years. Here are some things we know — and don’t know — based on the number of ballots that have already been cast.

Mr. Biden’s campaign has a clear path to victory by flipping Wisconsin, Pennsylvania, Florida and Michigan. However, the campaign is increasingly hearing pleas from Democrats in states that were once considered a long shot, such as Georgia, Texas, Iowa and Ohio.

Mr. Biden’s campaign, however, has long maintained that the race is closer than it appears in polling, and that it needed to conserve resources for must-win states. In recent days, though, some signs have pointed to a late-game push by Democrats into states that are considered surplus. In part, they are following the advice of some prominent Democrats and big donor groups, who have pleaded with Mr. Biden’s campaign that a big win is necessary to kick off a transformative presidency. Here’s what to know about the Biden campaign’s strategy in deep red states.

Mahrez on Burnley's hat-trick: the Third goal is the best - I don't often score with my head. But city's victory is more important
Mourinho against Chelsea is always powerful. How will it be this time?
Real Madrid is the leader in students in the top-5 leagues. Spain generally dominates, and the supplier from Germany is only Stuttgart
Thomas Muller: What do they say, you need to prove yourself on a windy evening in Stoke? Stuttgart is not Stoke, but their team is good
Atletico won the sixth consecutive game in La Liga, a winless streak - 25 games
Jordan Henderson: I would prefer to play without VAR. All the time we talk about individual episodes, not about football
Antonio Conte: People can't wait to vent their negativity on Inter. We must close ourselves off from those who want to throw mud at us or something worse
Source https://www.nytimes.com/2020/10/24/us/politics/trump-biden-campaign.html

Biden gets boost from Wisconsin recount that cost Trump $3M

Daniel Jones has no excuses in crucial Giants test

All the best Black Friday deals you can shop at Amazon

Iran suffers more humiliation with killing of nuclear chief. But no one in the region wants war

Iran suffers more humiliation with killing of nuclear chief. But no one in the world's most febrile region wants war

How the explosion in critical race theory is poisoning America

The Challenge's Tori Deal and Jordan Wiseley Call Off Engagement

Work, classes, financial aid — and now COVID-19: Life as a poor college student has only gotten tougher during the pandemic

‘We Learned an Amazing Amount’: How the IDFA Team Snatched Victory From the Jaws of Defeat in the Face of COVID-19

The assassination of a top Iranian nuclear scientist, briefly explained

Buccaneers' A.Q. Shipley may have suffered career-ending injury vs. Rams

I had a homecoming to be thankful for. Now I'm fighting for others to have the same

19th-Century Ship Is Revealed by Storm Erosion in Florida

GoFundMe raises over $83K for fishermen presumed lost at sea

Troy squares up against UNCW

How do we make sure that enough people get vaccinated to end the pandemic?