Want to get The Morning by email? Here’s the sign-up.

Good morning. Israel and the U.A.E. struck a deal to normalize relations. The Justice Department accused Yale of discrimination. And President Trump stepped up his threats against the Postal Service. 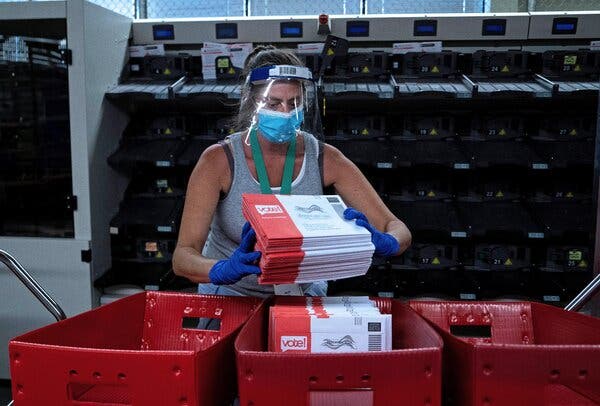 A postmaster general who’s a major Trump donor. A sweeping Postal Service reorganization. And a president who said on Thursday that he opposed emergency funding to support voting by mail.

To understand what’s going on with the Postal Service, and whether President Trump is trying to undermine mail voting before the presidential election, we spoke with Michael Shear, a White House correspondent for The Times.

“Basically, two things are colliding,” Michael told us. The number of Americans who plan to vote absentee has spiked during the pandemic. “But at the same time,” Michael said, “post office officials who are allies of President Trump are taking actions — like limiting overtime — that seem to be slowing down the mail right before the election.”

States set their own rules on mail voting. But some fear postal delays could undermine those rules. “The concern from Democrats is that the president and his allies at the Postal Service could slow down the mail so that ballots from Democratic voters would not be returned in time to be counted,” Michael said.

But it’s unclear which side any delays would hurt most. Despite the president’s false claims of fraud, studies show mail voting doesn’t benefit one political party over the other. And while Democrats disproportionately say they intend to vote absentee this year, Trump’s criticisms of absentee ballots “could result in more of his own supporters failing to vote,” Michael said.

Given those uncertainties, what can states do to limit potential delays?

One option is to send absentee ballots early and encourage their prompt return, Michael said. “States could also provide more opportunities for voters to fill out absentee ballots and drop them off at official election drop boxes, avoiding any possible mail delays.”

1. Israel and U.A.E. strike an agreement

Israel and the United Arab Emirates made a landmark agreement on Thursday to establish “full normalization of relations” in exchange for Israel’s suspension of plans to annex occupied West Bank territory.

Trump said he had brokered a deal in which Israel and the U.A.E. would sign a string of agreements on investment, tourism and other areas. If fulfilled, it would make the U.A.E. the third Arab country to establish normal diplomatic relations with Israel, after Jordan and Egypt.

The agreement generated an immediate backlash: Many Palestinians felt abandoned by an Arab nation leaving them to remain locked in an untenable status quo, while some Israeli settlers and their political allies were disappointed that Israel would pause its plan to claim sovereignty over West Bank territory.

Why now? Prime Minister Benjamin Netanyahu of Israel craved a historic achievement. Trump needed a diplomatic win. And the U.A.E., under fire for alleged human rights abuses in Yemen and Libya, needed to improve its image internationally.

The Justice Department on Thursday accused Yale University of violating federal civil rights law by discriminating against Asian-American and white applicants. The finding could have far-reaching consequences for the continuing legal challenges to affirmative action, a practice born in the civil rights era that some conservative groups have long opposed.

The charge comes two years after the department publicly backed Asian-American students who accused Harvard in a lawsuit of systematically discriminating against them. A federal judge later rejected that claim.

Members of the White Mountain Apache tribe in eastern Arizona have contracted the coronavirus at more than 10 times the rate of people in the state as a whole, but their death rate is much lower. Epidemiologists believe an intensive contact tracing program on the reservation most likely helped doctors find and treat gravely ill people before it was too late.

In other virus developments:

4. How the push to open schools backfired

In July, as the coronavirus outbreak reached new heights in much of the U.S., Trump issued a demand: “SCHOOLS MUST OPEN IN THE FALL!!!” His order seems only to have hardened the view among many school officials that reopening is unsafe.

A high school teacher in the Bronx told The Times he had already been nervous about the prospect of returning to school. When Trump started tweeting, it “just solidified that this is not being planned rationally or with health experts’ recommendation in mind,” the teacher said.

A tough spot for parents: Though the problems with the health crisis are systemic, the angst over schooling is personal. Here’s how families are navigating an issue with no perfect solution.

Here’s what else is happening

If you enjoy The Morning, please consider subscribing to The Times. Subscriber support helps make work like this possible.

IDEA OF THE DAY: The future of Hollywood

All eyes in Hollywood are on “Jurassic World: Dominion,” one of the first major films to restart production since the coronavirus crisis spurred a global shutdown in March.

The studio behind the film, Universal, has poured millions into safety protocols for the blockbuster, which has a relatively small cast and few shooting locations. If a production of this scale succeeds, it may set a precedent for film shoots of all sizes.

From shuttered theaters to strict new regulations on set, the way people make and watch movies has fundamentally changed in the past few months. What could that spell for the future of the industry?

The highly anticipated sci-fi epic “Tenet” was delayed numerous times before being tentatively scheduled for a theatrical release in September. Disney, however, decided to release its live-action “Mulan” on its Disney+ streaming service — with a whopping $30 price tag.

Some Hollywood executives believe that bypassing theaters and premiering movies on demand may be changing consumer behavior permanently, explained Nicole Sperling, a Times reporter who covers media and entertainment. “But then there’s the argument that once theaters are open again, aren’t people going to want to get out of the house?”

Grilled chicken is tricky: The window between raw and bone-dry is unfairly narrow. But when it’s done right, the deliciously tender payoff is worth it. Try your hand at it with this recipe for chicken skewers spiced with a fragrant ginger-and-cumin yogurt marinade. (The leftovers also make for an excellent chicken salad.)

Our weekly suggestion from Gilbert Cruz, The Times’s Culture editor:

Many of you (hopefully most of you) know about “Parasite,” the South Korean film that won best picture at the Oscars this year, as well as the top prize at Cannes. Fewer of you have heard about the film that came in second at Cannes. I’m here to tell you it’s wonderful.

Set in Senegal, where a young bride-to-be yearns for another man, “Atlantics” is a romance and a supernatural drama. If those modes sound like they would clash, be assured that the French-Senegalese director Mati Diop holds it all in perfect balance in her feature debut.

“Atlantics” is also one of the 50 best movies on Netflix. If you’re looking for 49 other choices, here’s our list.

The athlete Rudy Garcia-Tolson won five Paralympics medals by age 27 — four in swimming and one in track and field. After a three-year retirement, he decided to start training again, in the hopes of making it to the Paralympics for the fifth time. But there was one snag: Because of the coronavirus outbreak, all of the public pools near his home were closed.

This is the story of how the actor and former “X-Files” star David Duchovny helped him find a training pool: the one in Duchovny’s backyard.

Here’s today’s Mini Crossword, and a clue: What Britain Brexited from (five letters).

Or try this week’s news quiz.

Fulham want to rent Leipzig striker Lukman
Bruce about BLM: We are getting down on our knees, but is progress visible? Big question
Benteke alli at PSG: Playing with Neymar and Mbappe will raise his level. Dele will be great
Sandro Tonali: Zlatan is an example for Milan and an idol for everyone
PAOK FC have signed striker Colak. He was in the top 3 for goals in the Croatian League last season
Stan Collymore: bale at Tottenham is a move for losers. Tiago in Liverpool-Champions deal
Turkey is changing the limit on foreign players for the 9th time in 15 years. It seems that the tightening was lobbied by Erdogan and agents
Source https://www.nytimes.com/2020/08/14/briefing/postal-service-israel-fortnite-your-friday-briefing.html

'Rhea is calling you': Deepika Padukone brutally trolled after her name emerged in drug chats

Why Tesla's Battery Day is a big event for investors

What you need to know about coronavirus on Tuesday, September 22

The U.K. urged people to eat out and go to work. With cases surging, it's reversing course.

US To Put Murderer To Death as Federal Executions Spree Continues

Trump continues to get support from key age group ahead of election, poll finds

Fact-check: Prannoy Roy is not from Pakistan; old message resurfaces

No Supreme Court nominee yet, but McConnell already on the cusp of having the votes

Vatican Steps up Opposition To Euthanasia and Assisted Suicide

Fantasy football: How to fix your running back crisis

NASA finds parts of another asteroid on asteroid Bennu

GVP on Ajith-Sudha Kongara project: It is fantastic script and will be amazing if it happens

Oh My God, 'Friends' completes 26 years: Flashback at all the special moments from the show

Sizzler, one of America's first steakhouse chains, files for bankruptcy

U.K. Opposition Leader Says Boris Johnson Is ‘Just Not Up to the Job’

The future of the Senate may come down to Susan Collins

4 Tips for Discovering a Great Business Idea During the Pandemic

In political turmoil and economic collapse, Lebanon could now be overwhelmed by Covid-19

Why you may want to avoid Ocean City this week

What my husband, Elijah Cummings, would say if he were alive today

The United Nations At 75: It Has Never Been More Needed Nor Under Greater Threat

What Your Blood Tells You About Cancer

Cal Thomas: Trump and Supreme Court's future -- conservatives have been waiting for this moment for decades

Who is a terrorist, actually?

Latinx-Owned Fashion Brands That Should Be On Your Radar

6th-gen takes to the air: The fastest, stealthiest, most lethal aircraft ever?

Millennial Money: Home costs don’t stop at a down payment

For Young People’s Sexual Health, the Pandemic Changes the Game

The Fall Surge Is Here

California wildfire now "bigger than the city of Denver"

Sushant Singh Rajput was never sidelined in the industry; here's the shocking truth

An entire village lost its broadband at the same time every day for 18 months. Now we know why

Colleges knew the risks but they reopened anyway. Here's how they got it all wrong

The difficult choice about hiring a tutor for your children

Shannon Bream: Upcoming SCOTUS battle likely to be 'much worse' than Kavanaugh confirmation

Voters to Trump and Biden camps: Don't come knocking on our doors