HONG KONG — Typhoon Mangkhut battered Hong Kong and Macau on Sunday with 100 miles-per-hour wind gusts, drenching rains and 11-foot surges of seawater that inundated the first urban area of Asia to face the wrath of the year’s mightiest storm.

Mangkhut left a swath of damaged buildings and scores of injuries in Hong Kong and Macau before churning across the southern coast of China. Barely a day earlier, it ravaged the northern Philippines and left dozens buried in landslides, including people sheltering in a church and a dormitory for miners.

The unofficial count from the Philippines police put the number of dead as at least 59. The death toll was expected to rise sharply as rescue workers began digging into areas buried by mud, especially in mountainous parts of Benguet Province in northern Luzon Island.

Francis Tolentino, a senior adviser to President Rodrigo Duterte of the Philippines, estimated that 5.7 million people had been affected by the storm and raised concerns about how aid could be sent to the hardest-hit areas.

While the other side of the world was preoccupied with the destructive power of Hurricane Florence as it drenched the Carolinas, Mangkhut hurtled into southern China’s city of Taishan, in the sprawling, densely populated province of Guangdong, making landfall around 5 p.m.

China’s state television reported that at least two people had been killed in the province. As night fell, the full extent of the damage was not yet clear.

[Follow the latest updates on Typhoon Mangkhut in our live briefing]

Meteorologists have called Mangkhut the world’s most powerful storm of 2018, with a span as wide as 550 miles and wind gusts that hit 200 miles per hour last week. At its peak, the typhoon was equivalent to a Category 5 hurricane.

For Hong Kong, a metropolis that has shrugged off tropical storms in the past, Mangkhut was different. Though its peak gusts had slowed to 100 miles per hour, Hong Kongers were taking no chances.

The typhoon accelerated as it crossed the South China Sea, landing a nearly direct hit on Hong Kong at midday Sunday and sweeping through the city’s canyons of tall buildings.

By then, the city’s normally teeming streets were clear of people and cars, as residents heeded the local weather authority’s signal 10 storm warning — its highest level. 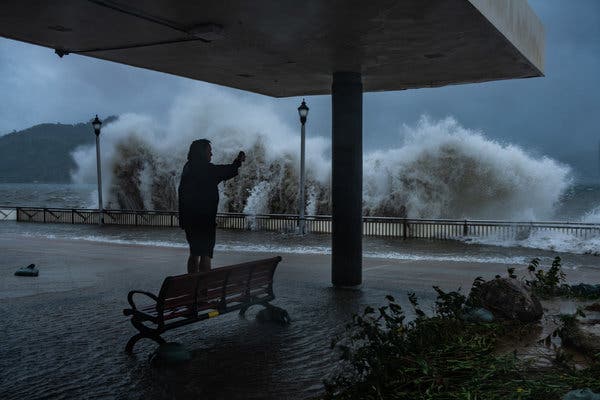 The intensity of the storm in Hong Kong tested a city that has developed intricate safeguards against typhoons.CreditLam Yik Fei/Getty Images

For the first time ever, Macau, the gambling capital nearby, closed its casinos because of a storm, although they were expected to reopen Monday. By the time the winds and rain eased, central parts of Macau had suffered major flooding and 20,000 people were left without electricity.

Hong Kong Airport, a central transit point for much of Asia, was virtually shut down on Sunday. Almost 1,000 flights were canceled or delayed. The outdoor sections of the city’s vaunted subway system were taken out of service.

Airports and high-speed railways in Guangdong, too, were shut down, throttling traffic in one of world’s most urbanized and densely populated regions, with 100 million people. By midday, most bridges in the province, which stretches southwest toward Hainan Island, were closed. Schools in the province, along with those in Hong Kong and Macau, have been ordered closed on Monday, when the storm’s effects were expected to linger.

China’s state television did not immediately provide details about the two deaths, but they followed reports on social media of people crushed by falling debris in Shenzhen and Dongguan, two cities along the Pearl River near Hong Kong.

There were no reports of deaths in Hong Kong, but the government said early Monday that nearly 400 people had sought medical treatment. More than 1,500 people sought refuge in 46 temporary shelters.

A stranded car in Heng Fa Chuen, a residental district near the waterfront in Hong Kong.CreditBobby Yip/Reuters

As the storm reached the mainland on Sunday evening, cities along China’s southern coast seemed eerily vacant, with residents mostly heeding warnings to stay indoors. As in Hong Kong, they had stockpiled water and basic foods on Saturday and Sunday, emptying stores.

Guangzhou, the region’s capital and largest city, ordered all restaurants closed to keep people off the streets. Xinhua, China’s official news agency, citing government reports, said that nearly 2.5 million people in the province had been affected in some way, with some seeking protection in more than 18,000 designated shelters.

Tens of thousands of fishing boats — fishing is a main part of the region’s economy, along with chemical and steel works — were ordered to port in advance of the storm. The authorities detained several fishermen who had defied warnings and put to sea anyway.

As the storm swirled through the night, it seemed likely that casualties and damage would grow, with the full impact of the typhoon becoming clearer Monday morning.

But on Sunday, some were in danger of failing. The Hong Kong Observatory warned people to stay away from steep hills and retaining walls and issued evacuation notices to residents living in areas prone to landslides. Temporary shelters were opened.

On Sunday, most residents hunkered down in their apartments, while those in more flood-prone areas took refuge in shelters.

As the storm bore down, people took to Facebook and WhatsApp messaging groups, circulating photos of the hurried preparations: cars and motorcycles mummified with cling wrap, indoor storefronts encased with spiderweb-like tape. One Instagram user altered an image to add Spider-Man onto the side of a Hong Kong building, where he’d pitched in by putting tape on a window.

As the storm unleashed its full force, the postings became more ominous.

Videos showed glass windows and doors smashing, pedestrians blown off the ground and residents frantically bailing rainwater off their balconies to prevent flooding.

In the neighborhood of Mong Kok, video captured the collapse of a crane or elevator shaft affixed to a building construction site. No injuries were reported.

Fearsome winds caused storm surges as high as 11 feet in Victoria Harbor, which separates Hong Kong Island from the rest of the city. The winds abated a bit in the afternoon as the typhoon headed toward the Pearl River estuary in Guangdong, where a cluster of fast-growing cities are considered particularly prone to climate change.

Lily Chiu, a 60-year-old caregiver in Hong Kong, had stayed overnight at the nursing home where she worked to avoid commuting to an early shift when the storm hit. Other than the tape on the windows of residents’ rooms, it had been a normal day, with hot meals running on schedule.

But this storm felt different.

“These last few hours felt more severe than other typhoons I had experienced,” Ms. Chiu said, after speakers announced that train services to the station near her home had been suspended. She prepared to walk home.

In the eastern Hong Kong neighborhood of Heng Fa Chuen, residents of a flooded housing complex linked arms and held hands as they waded knee-deep through pools of rainwater in streets, parking lots and stores.

“How am I going to go home?” one elderly man asked despondently into a phone.

“Heng Fa Chuen has become a water reservoir,” May Siu, a longtime resident, said. “I’ve lived here 30 years, and these storms only started looking like this with Hato last year,” Hato was the biggest typhoon last year.

Shaking their heads at the snapped lampposts and flooded entryways, residents said that the storm on Sunday had done far more damage than last year’s. Then teenagers rolled up their shorts and prepared to wade home through floating debris.

There was hardly any contact, and even outside the penalty area. Ex-member of Barca's Board of Directors about real's penalty
Benzema – the first La Liga player to score and assist in all months
The referee of the match real-Alaves injured his ankle and was replaced at half-time
Jamie Carragher: Manchester United should think about the goalkeeping position. De Gea will not return to his former level
Ex-analyst at Ajax about de Liga: Barcelona is a delight. In Juve, he will achieve more
Del Bosque on the 2010 world Cup final: the Netherlands did not act very well, trying to kill our game
Ex-referee Andujar Oliver on real's penalty: Mendy was clearly knocked down in the penalty area
Source https://www.nytimes.com/2018/09/16/world/asia/typhoon-mangkhut-china.html?partner=rss&emc=rss

Hundreds try to storm Serbian parliament as protests heat up

UN encouraged experts may get to visit oil tanker off Yemen

‘A slap in the face:’ Goya faces boycott over Trump praise

Stream It Or Skip It: ‘Down to Earth with Zac Efron’ on Netflix, Where the ‘High School Musical’ Hunk Goes Global

FedEx Made a Demand Dan Snyder Couldn’t Afford to Dismiss

The vanity of ‘white guilt’ and other commentary

The Latest: Pennsylvania logs 1,000-plus cases in one day

Amazon tells employees to remove TikTok immediately -- then takes it back

'It's so scary': Houston, Texas teachers voice concerns about reopening schools this fall

U.S. Will Impose Tariffs on French Goods in Response to Tech Tax

Flying is back if you can afford a private jet

California to release another 8,000 inmates to slow virus

Ghislaine Maxwell had no contact with Epstein for over a decade, lawyers claim

PHOTOS: How Hong Kong Reopened Schools — And Why It Closed Them Again

The New ‘Systemic Racism’ That Is Coming

Stream It Or Skip It: ‘Little Voice’ On Apple TV+, A Romantic Dramedy About A Young Woman Trying To Find Her Artistic Voice In New York

California Will Release Up To 8,000 Prisoners Due To Coronavirus

IndyCar drivers grateful to have fans back this weekend

Snag these No. 1 sneakers on Amazon that feel like 'walking on clouds'

Jada and Will Smith address relationship in ‘Table Talk’

The best fashions from the first-ever Digital Couture Week

Light it up! U-Stream's ring light provides boost for better pics and video

Was Will Smith Really Crying About His Marriage On Instagram? [Update]

Fact check: What role do kids play in spreading the coronavirus?

Protests continue outside Md. restaurant after customer says he was ‘racially profiled’

Lasers could replace sailors in peeling old paint off ships

Ayaan Hirsi Ali blasts Ilhan Omar over call to remake US, says 'I don't think we need a revolution'