Oprah Winfrey will moderate a conversation with the cast and crew of the upcoming Hulu Original film, The United States vs. Billie Holiday.

Winfrey is set to have a candid discussion about the highly anticipated feature with director Lee Daniels, actress Andra Day, actor Trevante Rhodes, and writer Suzan-Lori Parks, who will unpack Holiday’s journey. 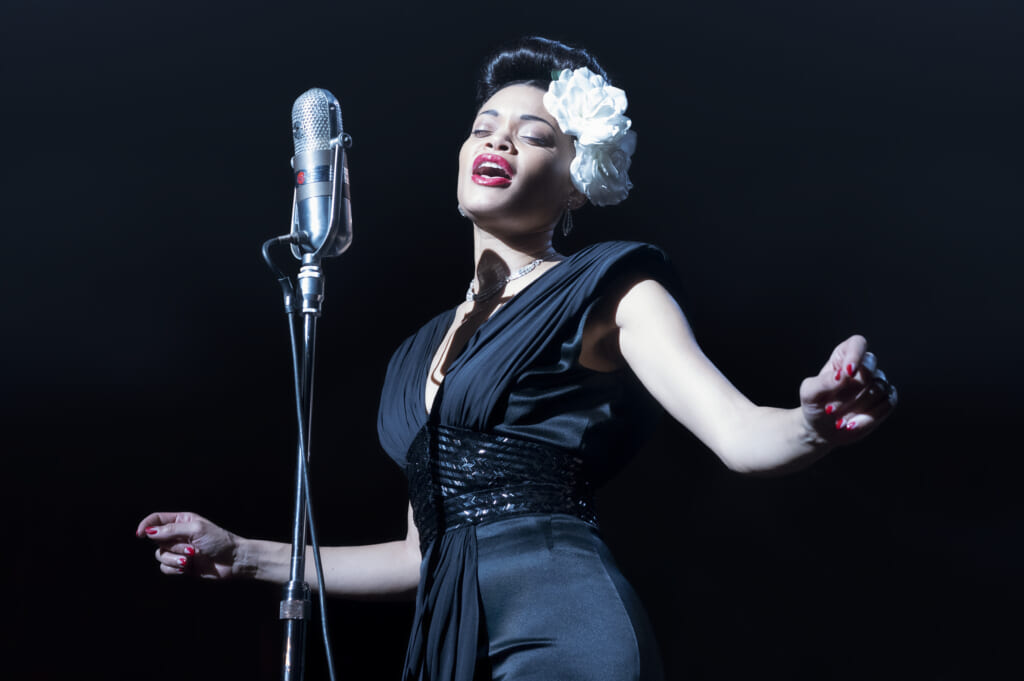 The film follows Holiday during her career as she is targeted by the Federal Department of Narcotics with an undercover sting operation led by black Federal Agent Jimmy Fletcher, with whom she had a tumultuous affair. Beginning in the 1940’s in New York City, the federal government targeted Holiday in a growing effort to escalate and racialize the war on drugs, ultimately aiming to stop her from singing her controversial and heart-wrenching ballad, “Strange Fruit.”

theGRIO previously reported, Andra Days said she “abused” her body to help get into the headspace of Holiday for her role in the film.

Day dished about her preparation for her feature film debut performance in an interview with actor Leslie Odom, Jr. on Variety’s Actors on Actors feature.

“I basically abused my body for a long time. I’m joking and not really joking,” she said.

“I put my family through it; I put myself through it. I went from 163 pounds to 124 pounds. I would talk like her and I don’t drink or smoke, but I started smoking cigarettes and drinking alcohol. Not that I recommend people do this; I just was desperate because this is my first role,” Day added.

“Whether you are new to the story and legacy of Billie Holiday or know every note she ever sang, I do hope our celebration of this complex woman does justice to a great musical legend and civil rights activist whose artistry resonates as well today, as it did 80 years ago. Hulu releasing this film and giving it a platform to be seen nationwide is a blessing, because as recent events reveal, our country has much work to do in fulfilling its promise of a more perfect union,” Daniels said in a statement.

Oprah’s special conversation with the cast can be streamed on Hulu starting on February 24.

The United States vs. Billie Holiday premieres on Hulu on Friday, February 26.

US, EU still open to have nuke deal talks after Iran rejects meeting

Could Walmart Be the Ultimate Growth Stock?

Chile’s Film and TV Production Biz Revs Up Its Engines

Looking for Recession-Proof Jobs? Here Are 23.

All our recent progress with Covid-19 could be wiped out by variants, CDC director says. 'Please stay strong'

Thanks to Vice President Kamala Harris, the power of women will never be the same

There's a race to pass the stimulus by March 14. Here's what's at stake

Huawei Executive Back in Court to Fight US Extradition

6 Steps to Take Create an Online Course That Sells

Virginia vs. Miami prediction, line: Take Under in ACC clash

‘Sound of Metal,’ ‘Wonder Woman 1984’ and ‘News of the World’ Among Golden Reel Nominees

Reporter who says Cuomo intimidated, bullied her broke down when others came forward: ‘I just started crying’

‘Dehumanization’ of Chicago’s restaurant workers leaves them with a tough choice: COVID-19 risk or unemployment?

California announces school reopening deal, offers $6.6B to districts that open by this date

On My Screen: ‘On The Rocks’ Star Rashida Jones’ Favorite Film And Television Memories, Guilty Pleasures And Karaoke Hits

Playboi Carti Takes Kid Cudi Behind the Method to His Madness

Improve your home’s air quality with this smart air purifier

Master your golf swing with this golf training aid for $55

Jason Kennedy is out at E! after more than 15 years

What Time Is ‘All American’ on Tonight? How to Watch Episode 7 Live on The CW

Deborah Joy Winans on ‘Don’t Waste Your Pretty’ Role: ‘I never thought I could be the sexy girl’

'Get rid of them all!' Aggrieved Trump promises GOP primaries riven by infighting in 2022

One student hurt in school shooting in Pine Bluff, Arkansas

Gab, a social platform favored by the far right, says it was hacked

India-Sri Lanka flights to resume soon under "air bubble"; what it means [explained]

Hilaria and Alec Baldwin welcome their sixth child together

Prince Philip transferred to another UK hospital amid treatment for infection

Posting less, posting more, and tired of it all