Bashirah Tripp is accused of running down her significant other in a Virginia shopping mall. (Norfolk Police Department)

Shoppers were stunned over the weekend when they came upon a horrific scene in a Virginia shopping center. Bashirah Tripp, 34, of Portsmouth, Virginia is now under arrest for running down what is believed to be her significant other last Thursday.

Witnesses say they saw Tripp arguing with the man before she ran him down, according to Norfolk’s WAVY News.

“It was a horrible, horrible thing to see. I’ve never seen anything like that,” an unidentified witness told WAVY. She was shopping when she heard an engine rev.

“I heard the vroom of the engine, then the crunches,” she said. 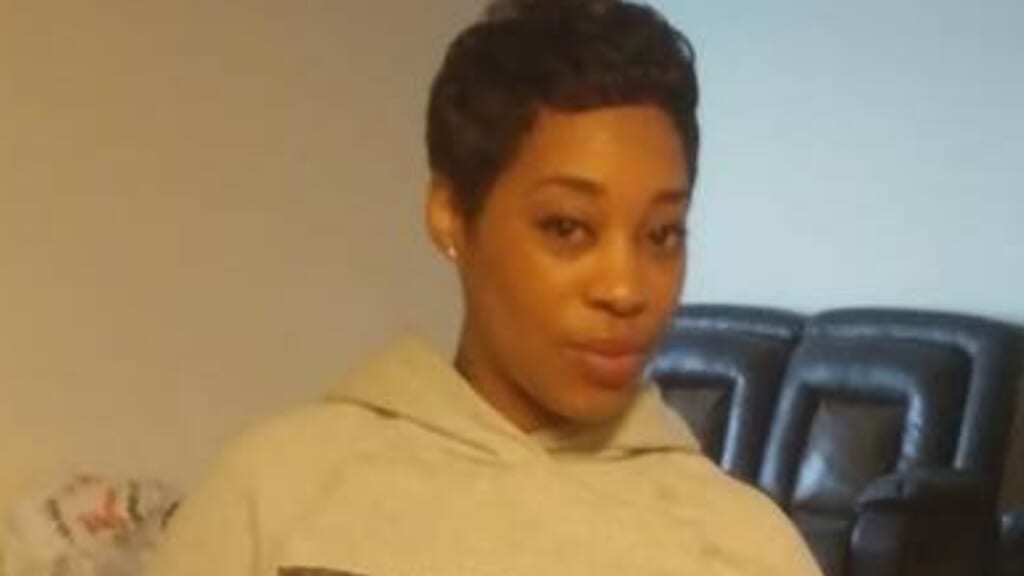 A bystander recorded the video which made the rounds on social media over the weekend and showed the man lying in front of a car bleeding. Tripp is seen throwing the bumper from the car on the man and screaming “That’s what happens when you leave your wife. I gave you 18 years of my life,” and “I hope you are dead.”

Witnesses at the scene covered the man who is believed to be Tripp’s significant other until police and paramedics came. Witnesses told the first responders that he was still breathing.

Tripp remained on the scene using her phone after the incident and offered police no resistance when she was arrested.

The incident took place at the JANAF Shopping Center in Norfolk.

The unidentified man survived the incident but was last known to be in critical condition. Tripp is being held in Norfolk City Jail without bond, charged with aggravated assault. Norfolk police have classified the incident as domestic violence.

A court hearing for Tripp has been scheduled for Wednesday.

You can see the full video below which contains graphic content.

Ronald Koeman: It's normal for Messi to be sad about a friend leaving. Leo is a model for everyone in training
Brighton are the kings of bad luck. Set a Premier League record on bars (5 times per match!), lost to Manchester United due to a penalty after the final whistle
Solskjaer on 3-2 with Brighton: Manchester United deserved one point, no more. Good thing there is no Mourinho to measure the goal
Brighton coach on 2:3 with Manchester United: Sometimes life is unfair. We dominated
The referee blew the final whistle, but after VAR awarded a penalty in favor of Manchester United. Bruno scored in the 99th minute after Brighton's goal in the 95th
Koeman on Suarez's departure: I'm not the villain in this movie. This is the club's decision
Maguire scored the 2nd goal for Manchester United in the Premier League and the first since February
Source https://thegrio.com/2020/08/10/virginia-woman-arrested-running-over-man/

Portland Bracing For Large Right-Wing Rally In Support Of Trump

US colleges struggle to salvage semester amid outbreaks

The latest on 2020 election and SCOTUS battle

New study says US is nowhere near COVID-19 herd immunity

How Amy Coney Barrett Would Reshape the Court — And the Country

3 dead, at least 12 wounded in overnight shootings in Chicago

Amid pandemic, confidence in CDC erodes with questions of political interference

‘Not the bad guy’: Koeman hits back on Suárez exit at Barca

PG&E May Shut Off Power To Nearly 100,000 Customers Over Fire Concerns

Amy Coney Barrett: Mother of 7, woman of faith, who says religion has no place in rulings

Biden's trap for Trump in the first debate

Trump heads to Pennsylvania for the second time in a week: What's at stake

How Jamal Murray ended up in ‘Schitt’s Creek’ Rosebud motel

Thousands expected to turn out in Portland for 'Proud Boys' rally

Lebanon's prime minister-designate steps down in blow to French plan

Big Mother Can Be Just As Threatening As Big Brother

Holy Shirt! ‘The Good Place’ Season 4 Is Now on Netflix

Column: She died on a sidewalk near where she grew up. She was L.A.'s 959th homeless death this year

Julie and the Phantoms Season 2? What the Cast Knows So Far

Judge Napolitano on Trump's third Supreme Court nominee: 'This is a moment of triumph'

Packing the Court Doesn’t Work. Threatening to Pack It Might.

Kris Jenner confirms she will not be joining ‘RHOBH’

Moschino sends puppets down the runway for Milan Fashion Week

NASA astronaut to cast her ballot 200 miles above Earth

What Apple’s Fortnite Fee Battle Is Really About

Why Silicon Valley CEOs are such raging psychopaths

Some young activists aren't excited about a Biden-Harris ticket. Here's why

President Trump, here are three tips for besting Biden at the debate

For U.K.’s Boris Johnson, Hardball Tactics Seem the Only Way to a Brexit Deal

Fire threat, heat wave in store for West this weekend as colder temps come to Midwest

With Democrats' votes split, party may risk being shut out of Senate runoff

What Keeps a Vaccine Expert Up at Night

10 classic books that keep getting banned

How do you go to the Los Angeles Public Library when COVID-19 has closed its buildings? It's easy, fun and surprisingly comforting

Pennsylvania: In a county Trump flipped, Democrats seek voters willing to flip back.

'300-foot flames coming at us': The battle to save Mt. Wilson from the Bobcat fire

Work More Efficiently with Data When You Master Power Query