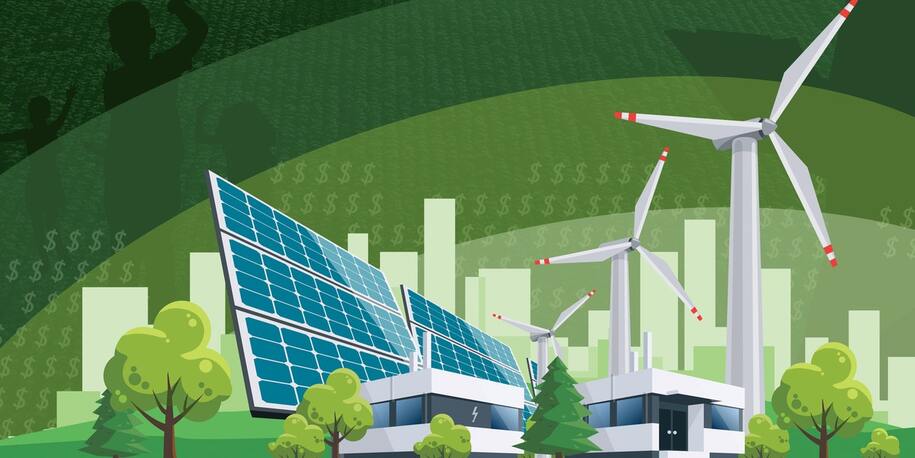 Digging out of the Pandemic Recession should offer the opportunity to rebuild the economy with a focus on green infrastructure.

Josh Bivens at the Economic Policy Institute writes&nbsp;in Principles for the relief and recovery phase of rebuilding the U.S. economy that “an overwhelmingly policy response” is need to address the shock of the coronavirus pandemic and recession. First stop the economic bleeding and then build a resilient economy:

By “stop the bleeding” we mean using fiscal policy to end the crisis of joblessness and restore the labor market to a reasonable degree of health. Failing to invest enough to sustain a healthy labor market would fatally compromise both the political and the economic ability to structurally reform the economy’s key institutions to create fairer outcomes.

We have seen this failure before, with fiscal recovery efforts following the Great Recession of 2008–2009 that were insufficient and too short-lived. As a result of this austerity, it took a full decade for the labor market to return to even its pre–Great Recession health (which was too modest a benchmark to begin).1&nbsp;It seems clear that a key reason why the Obama administration was unable to get ambitious reform efforts finished after its first year in office was the continued intense labor market distress.

This memo explains why policymakers need to pass roughly $3 trillion in debt-financed fiscal support now, with the first $2 trillion hitting the economy between now and mid-2022.&nbsp;This amount of upfront stimulus, combined with investments that ensure a very slow phaseout of this fiscal support, are needed to ensure a return to a high-pressure, low-unemployment labor market by mid-2022. Specifically, the memo calls on policymakers to take the following actions:

THREE OTHER ARTICLES WORTH READING

“The good hand of God favored our beginnings [by] sweeping away great multitudes of the Natives … that he might make room for us.” ~~William Bradford, a founder and governor&nbsp;of the Plymouth Colony.

At Daily Kos on this date in 2012—There was no 'war on coal,' but there should be. Just not on the backs of miners. Delay is denial:

Coal is a disaster for the climate and, although it provides good-paying jobs in areas where there often are no others, it also is a disaster for coal communities and miners themselves. For those reasons, with his last election campaign a success, President Obama should push hard to get regulations in place that work to force an end to most coal mining—a ban on mountain-top removal, regulations that control CO2 emissions of existing plants, more funding for enforcing health and safety regulations while coal is still mined, installing every obstacle the executive branch can come up in the path of soaring U.S. coal exports and negotiating a no-exports pact with the world's other leading exporters (Russia, Australia, Indonesia). He should also find various innovative means to support and invest in the future of coal miners and other coal-company employees who will lose their livelihood as coal production is cut back.

Huntelaar returned to Schalke. 37-year-old striker signed until the end of the season
Christian Pulisic: My faith in God has grown significantly. I don't know how I would have coped without feeling like he was looking out for me
In Turkey, a retrial will be held in the case of the harassment of Turan to the wife of the singer Berk
Ole Gunnar Solskjaer: Bruno not tired. If I ask him, he will never say this
Hundreds of people with color blindness complained about the colors of the uniforms in the Liverpool - Manchester United match. The hosts played in red, the guests-in dark green
Setien's former assistant at Barca has taken charge of Andorra Pique
Milan and West Ham are Interested in Firpo. Barcelona is ready to release the defender
Source https://www.dailykos.com/stories/2020/11/25/1998255/-Wednesday-Night-Owls-Principles-for-relief-recovery-and-rebuilding-the-U-S-economy

McConnell Says Rioters Who Stormed the Capitol Were ‘Provoked’ by Trump

Biden’s test: How to lead US out of virus ‘dark winter’

Mitch McConnell says Capitol rioters ‘were provoked by the president’

US accuses China of 'genocide' of Uyghurs in Xinjiang

Michigan man sentenced to prison in drowning of autistic son

Washington, Malek and Leto face off in ‘The Little Things’

Beleaguered small businesses in D.C. are 'paying the price' for Capitol rioting

Harry Brant, model and son of Stephanie Seymour and Peter Brant, has died

College Board to cut SAT's essay section and subject tests

Many health care workers refuse to get COVID-19 vaccines

Pentagon: No Inside Threat Among National Guard For Inauguration

On his last full day in office, Trump sinks to his lowest low in major polls

Biden plans to propose a sweeping immigration overhaul on his first day in office.

‘WandaVision’ is the MCU’s Most Tragic Story Yet

Daniel Kaluuya On Playing Black Panther Party Chairman Fred Hampton In ‘Judas And The Black Messiah’: “The Biggest Version Of Me Had To Show Up”

Analysis: In tough NBA times, games not the top priority

Will the Biden administration be able to stop evictions of tenants hurt by Covid?

Here's what to buy to stay safe while flying

Wisconsin to offer coronavirus vaccine to everyone over age 65

8 luxury linens that'll make your bedroom feel like a hotel

Apple may bring back Touch ID for next year’s iPhone

Cauliflower Gets the Hash Brown Treatment