Strong southwesterly downslope winds fed fires in the Eastern Sierra last week, including one that devastated the town of Walker, near the California-Nevada border.

Winds gusted to 40 mph for 12 to 16 hours, according to Marvin Boyd, a meteorologist with the National Weather Service in Reno.

Like Washoe Zephyrs, the winds that fanned the Pinehaven and Mountain View fires, blew from west to east. But that’s where the similarity ends.

Washoe Zephyrs, described by Mark Twain in “Roughing It,” are westerly winds that are almost a daily occurrence on the eastern side of the Sierra during the summer. Washoe Zephyrs usually arise in the late afternoon and evening and gust at about 20 to 30 mph, kicking up dust across the arid landscape. 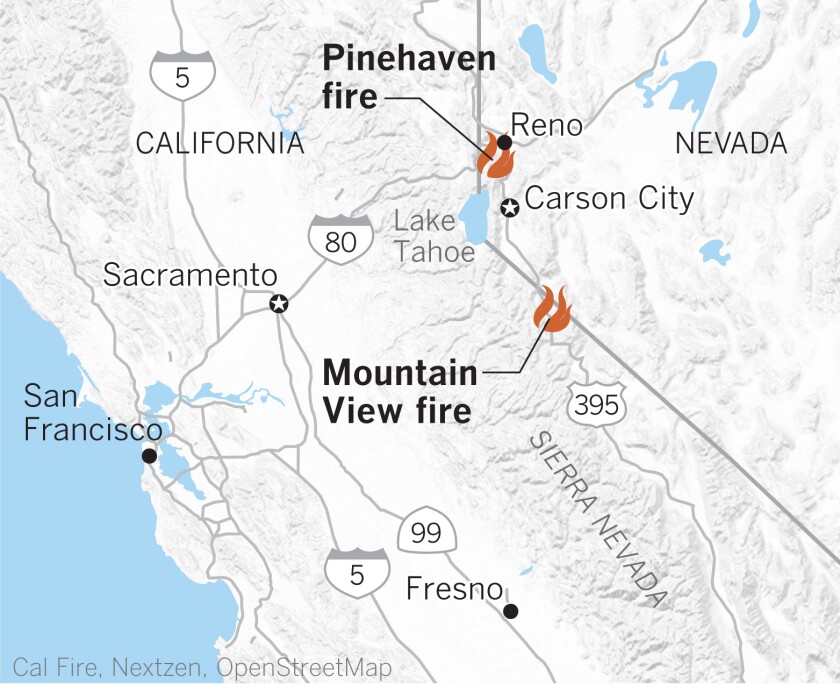 The destructive winds in the Eastern Sierra last week were foehn winds. California’s best-known ill winds, the Santa Anas, are also foehn winds, but they blow downslope in the opposite direction, from the northeast toward the southwest. The Diablo winds and Mono winds are also foehn winds, coming from the same direction. These are often referred to as offshore winds. Mono winds, which barrel down the western slopes of the Sierra from the area around Mono Lake, were implicated in the massive Creek fire in Fresno and Madera counties.

Santa Anas, Diablos and Mono winds have a common source: high pressure in the deserts to the east.

Last week’s wind event in the Eastern Sierra created “pretty remarkable wind-driven fires that show the power of the wind in November,” said Alex Hoon, an incident meteorologist, also with the National Weather Service in Reno. Multiple destructive wildfires were spread by winds that were “like a freight train,” he said. “Winds of this magnitude are uncontainable.”

A foehn wind is defined as a strong, warm, dry wind that flows down into the valleys when stable, high-pressure air is forced down the lee slopes of a mountain range, according to the National Wildfire Coordinating Group.

As the air was lifted up the windward side and passed over the summit of the Sierra Nevada, the moisture in it was wrung out in the form of precipitation.

The air then descended and was warmed — at a rate of about 5.5 degrees Fahrenheit per 1,000 feet — and dried, producing critical fire weather conditions as it hurtled toward the California-Nevada border. 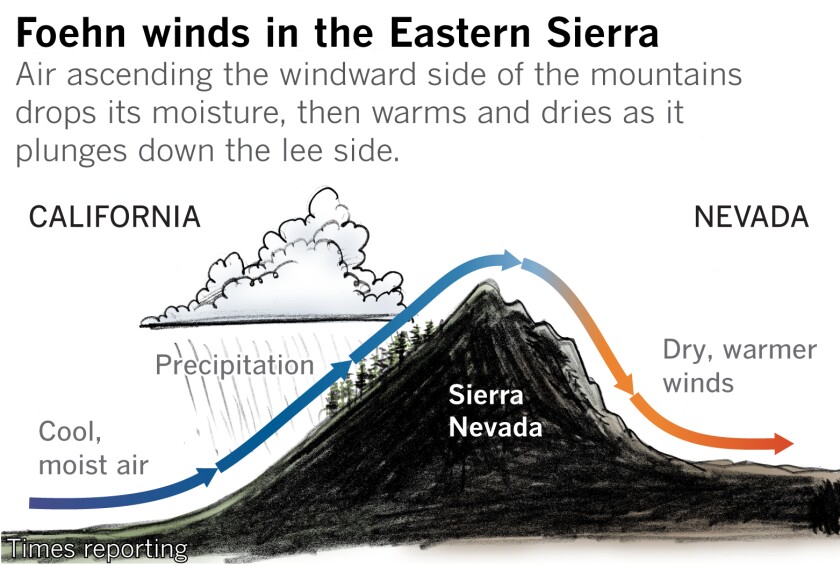 The winds that fed the Mountain View fire.

That flow was supported by a low-level jet stream, Boyd explained. A stable, pre-frontal layer of air over the top of the mountains was in just the right spot, forcing the winds downslope.

The strong winds and low humidity acted like a bellows on the fast-moving, plume-dominated Mountain View fire that consumed more than 28,000 acres and burned about 90 homes in Walker, jumping from home to home and forcing frantic evacuations, and resulting in a fatality.

When the incoming weather front arrived the following morning, it brought rain and snow that doused the fires.

Strong downslope foehn winds often disrupt the atmospheric conditions necessary for formation of pyrocumulus clouds like the one that developed with the Mountain View fire, and very strong winds tend to bend the plume more horizontally than vertically, according to Nick Nauslar of the National Interagency Fire Center in Boise, Idaho. But, in rare cases, a pyrocumulonimbus cloud can form in spite of strong winds, as was the case with the Bear fire, part of this summer’s North Complex fire in Northern California, he said.

In the case of Southern California’s Santa Anas, the high-pressure air is usually pooled in the Great Basin of Nevada and Utah, and winds blow downslope toward lower pressure at the California coast. As they drain toward the coast they speed up as they funnel through passes and canyons, seeking a route of least resistance. 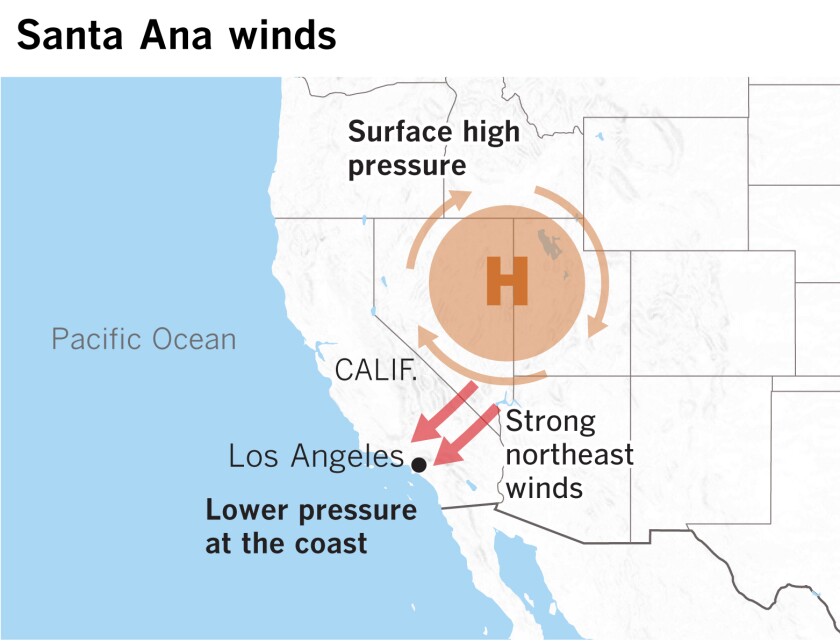 This is the typical setup for Santa Ana winds.

Foehn winds occur in a number of places around the globe. Chinook winds are a well-known example. They occur on the eastern slope of the Rocky Mountains, and also blow from west to east, producing dramatic changes in temperature and weather. Chinook winds, which can gust up to 80 mph, are called “snow eaters” because they can vaporize snow before it has a chance to melt. This process is called sublimation. The air is so dry that the snow goes directly from its frozen state to vapor — evaporation that bypasses the liquid or melted state entirely.

For Boyd, the weather service meteorologist, even though the Reno area had just received 6 inches of snow a few days before the winds kicked up, the Eastern Sierra infernos provided a dramatic illustration of how dry fuels and low humidity with extremely strong winds can make an explosive combination.

But while Walker is at about a 5,400-foot elevation, and Reno is at about 4,500 feet, Santa Ana winds descend mountain slopes all the way to sea level in Los Angeles, allowing for that much more compression heating and drying. That’s why Santa Ana winds can make you feel like you’re being blasted with an electric hair dryer.

Over Thanksgiving weekend, winds are expected to peak Thursday night and Friday morning, according to the National Weather Service, with critical fire weather conditions into Friday evening. By Friday morning, relative humidity in the L.A. area will be as low as the single digits.

This time of year, the air mass in the Great Basin starts off much cooler, so temperatures won’t reach the 90s as they might with Santa Ana winds earlier in the season, said Rich Thompson, a National Weather Service meteorologist in Oxnard. But readings in the 70s and lower 80s are possible in coastal locations as the Santa Ana winds subside.

Bruno picked up 4 Player of the Month awards in 2020. Ronaldo, Henry and Lampard had the same number-but for a career in the Premier League
Lev - the best coach of the decade in the national teams, Deschamps-2nd, Shevchenko-17th (IFFHS)
Head of the Premier League: We ask players not to hug and change their behavior
Milan had rented the midfielder, Torino Meite until end of season with option to buy
Ramos played on painkillers with Athletic due to knee problems
Barcelona's presidential election is scheduled to take place on March 7
Sir Alex Ferguson: Fortunately, I was retired when I watched Liverpool play in the last two years
Source https://www.latimes.com/california/story/2020-11-25/fires-in-the-eastern-sierra-were-fueled-by-winds-that-are-similar-to-santa-anas

What we can learn from Martin Luther King Jr.'s crisis of faith

Browns’ Garrett ‘due,’ wants to leave impression on Mahomes

How The Disney Marketing Team Revitalized The MCU With ‘WandaVision’, 20 Months After ‘Avengers: Endgame’

Athletic trainers adapt to chaos of sports in a pandemic

A Second Economic Crisis for Biden, but a Different First Response

New Warnings of Violence as Security Tightens for Inauguration

Mets agree with 6 on 1-year deals, including Conforto, Smith

Arrests Mount in US Capitol Riot With Nearly 300 Suspects Identified

More NBA games off, as league continues struggles with virus

You might remember Russel Honoré for his response to Hurricane Katrina. Now he'll assess US Capitol security

Jeff Flake Calls on Republicans to ‘Move Away From Trump-Ism’

National Rifle Association Files for Bankruptcy as Part of Restructuring

Deshaun Watson getting angrier at Texans as he drops 49ers hint

It's 53% alcohol and tastes like fire. Here's how this liquor brand took over China

Stream It Or Skip It: ‘The Ultimate Playlist of Noise’ on Hulu, Where A Troubled Teen Takes To The Road In Search Of Recorded Sound

Where Was ‘A Hidden Life’ Movie Filmed? See the Movie’s Set Locations

EXPLAINER: Why expansion of vaccine to smokers caused a stir

U.S. races to catch up with other countries in COVID sequencing research

The CW Boss Mark Pedowitz: “We Need To Create A Diverse Legacy” For The Next Generation

Duranice Pace of gospel group the Pace Sisters dies at 62

Florida state GOP rep on call to divest from Big Tech: We want to show 'they have made a mistake'

On average, Mexicans consume 1.3 liters of beer per week: INEGI

Column: Confronting a racist past, Caltech will excise names of eugenics backers from campus

Why rich people are more likely to socially distance

Trump’s Final Attempt to Sabotage the Census Has Officially Failed

Lakers vs. Pelicans Live Stream: How To Watch The Lakers-Pelicans Game Live

Netflix releases trailer for youth football docuseries ‘We Are: The Brooklyn Saints’

Mexico Frees a General, and Wounds Its Alliance With the U.S.

My friendship — and last phone call — with Joanne Rogers, widow of Mister Rogers

Google may face 4th government lawsuit over its business practices