What if America Gets a Divorce? And Other Final Election Predictions

Listen and subscribe to “The Argument” from your mobile device:

With just days left until Election Day, Michelle and Ross are joined by the Time magazine columnist and senior editor of The Dispatch, David French. Together, they revisit last year’s conservative brawl over “David Frenchism,” give the Lincoln Project more airtime than it deserves, and debate the impact Amy Coney Barrett’s confirmation will have on the religious conservative vote. All three make their election predictions, including in some surprisingly competitive Senate races.

Then, how likely is the re-election of Donald Trump to spur the dissolution of the United States as we know it? David makes the case for a relatively bloodless “Calixit,” and Michelle prefers a “velvet divorce” to a violent civil war. But how likely is either?

And finally, David recommends what “may be the last unifying piece of pop culture left in the United States of America,” available now on Apple TV. 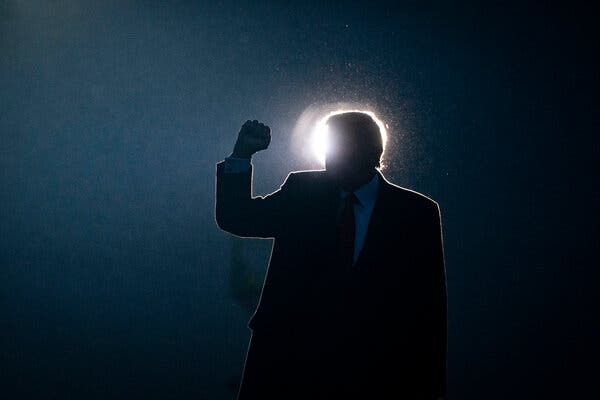 How to listen to “The Argument”:

Press play or read the transcript (found by midday Friday above the center teal eye) at the top of this page, or tune in on iTunes, Google Play, Spotify, Stitcher or your preferred podcast listening app. Tell us what you think at argument@nytimes.com.

I’ve been an Op-Ed columnist since 2009, and I write about politics, religion, pop culture, sociology and the places where they intersect. I’m a Catholic and a conservative, in that order, which means that I’m against abortion and critical of the sexual revolution, but I tend to agree with liberals that the Republican Party is too friendly to the rich. I was against Donald Trump in 2016 for reasons specific to Donald Trump, but in general I think the populist movements in Europe and America have legitimate grievances and I often prefer the populists to the “reasonable” elites. I’ve written books about Harvard, the G.O.P., American Christianity and Pope Francis, and decadence. Benedict XVI was my favorite pope. I review movies for National Review and have strong opinions about many prestige television shows. I have four small children, three girls and a boy, and live in New Haven with my wife. @DouthatNYT

I’ve been an Op-Ed columnist at The New York Times since 2017, writing mainly about politics, ideology and gender. These days people on the right and the left both use “liberal” as an epithet, but that’s basically what I am, though the nightmare of Donald Trump’s presidency has radicalized me and pushed me leftward. I’ve written three books, including one, in 2006, about the danger of right-wing populism in its religious fundamentalist guise. (My other two were about the global battle over reproductive rights and, in a brief detour from politics, about an adventurous Russian émigré who helped bring yoga to the West.) I love to travel; a long time ago, after my husband and I eloped, we spent a year backpacking through Asia. Now we live in Brooklyn with our son and daughter. @michelleinbklyn

Modric on Real Madrid: We are missing just a little bit. We will get better and have a good season
Joel Matip: Atalanta is a threat to any team in Europe
Zidane on Real Madrid without Ramos: We must correct the statistics of games without him. We understand how difficult it will be
Pep Guardiola: Manchester City are not obsessed with the Champions League. We want to perform as well as possible
Lazio may sell Alberto due to criticism of the club. Juve, Inter and Everton are Interested in the midfielder
Messi is getting old. Barcelona must think about the future. That’O suggested Catalans sign Mbappe and Mukoko
Hans-Dieter flick: it can be very uncomfortable To play against Salzburg
Source https://www.nytimes.com/2020/10/30/opinion/the-argument-trump-biden-election-secession.html

Who is Jacob Collier, Grammy album of the year nominee?

Thanksgiving week weather forecast -- where storms will keep you indoors

With COVID cases spiraling, travelers into L.A. must sign a form acknowledging quarantine

COVID-19 hospitalizations in New York are up 128% in 3 weeks, Cuomo says

EU, other donors step up with funds to help Afghanistan

'Max' Brenner Was Pushed Out of His Own Company, Financially Destroyed, and Banned From Making Chocolate For Five Years. But He Learned: 'Hell Has Benefits.'

For Much of the U.S., Good Weather Will Allow for an Outdoor (and Safer) Thanksgiving

Trevor Noah will host next year's Grammys, but he's 'not trying to catch Corona'

How U.S. Medical Schools Are Training a Post-Pandemic Generation of Doctors

21 Savage speaks out about stabbing death of little brother