Why Arizona's Latino vote has Democrats in a tailspin

Although Biden has maintained a narrow edge above President Trump in several battlegrounds, a recent ABC News/Washington Post public opinion survey showed the president holding a 1-point 49%-48% edge over the former vice president in the Copper State.

TRUMP COULD HAVE OPENING WITH BLACK, LATINO MEN AS BIDEN UNDER-PERFORMS IN POLLS, REPORT SAYS

Recent National Association of Latino Elected and Appointed Officials and Latino Decisions tracking polls show Biden has been trailing his predecessors, like former Secretary of State Hillary Clinton and former President Barack Obama. While Biden is leading Trump 65% to 25%, Clinton had 66% in 2016 and Obama had 71% in 2012.

Latinos make up at least one out of five of Arizona's eligible voters, according to the Pew Research Center. And, while the president has a relationship with Cuban American voters, Biden is hoping to woo others in states like Florida, Texas and Arizona.

Yet, the same polls found that half of Latino households report they have not been contacted by either campaign and that 80% are "almost certain" they will vote -- another potential record to add to expected unprecedented levels of voter turnout.

U.S. Census Bureau data shows only 48% of Hispanic and Latino voters cast ballots in 2016, far less than the 61% national turnout and the lowest of any group tracked by the agency.

Latinos -- expected to be the largest minority in this year’s election for the first time, with 13% of eligible voters -- tend to skew toward Democrats, according to the Pew Research Center. Some 32 million Latinos are eligible to vote in November, FiveThirtyEight reported Thursday. 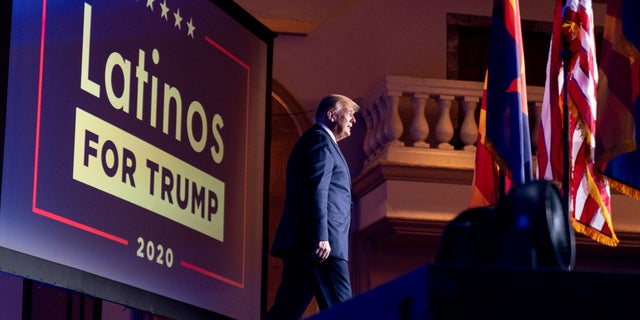 But outreach is important. And as the Biden campaign has worked to keep its canvassing virtual -- citing coronavirus health and safety concerns -- the Trump campaign has continued knocking on doors.

Nuestro PAC founder Chuck Rocha told RollCall he believes the campaign needs to shift its focus and resources toward Latinos in the coming days.

However, Arizona Rep. Ruben Gallego, a member of Biden’s Latino Leadership Committee, said the campaign is on the right track.

"As a matter of fact, more Latinos voted in 2018 in Arizona than they did in 2016,” he told RollCall. “And now it kind of feels like we’re going through the same drama, when in reality, I just don’t see it as a problem.”

Hispanic and Latino communities have historically been hard to poll, and turnout in 2018 helped Krysten Sinema to a Senate victory in Amazon.

Sinema became the first Democrat to win an Arizona Senate seat in more than two decades. But soon after, Republican Martha McSally was appointed by Gov. Doug Ducey to the other Senate seat following the passing of Sen. John McCain.

Gallego countered Rocha, arguing the "investment is there" and assured that he was not worried.

The potential for a blue Arizona is irregular. The last time the state voted for a Democrat was in 1996 following a Republican streak dating back to 1952.

While Trump won the state with 48.1% of the vote in 2016, his margin was notably smaller than previous candidates. It's a factor Democrats hope to capitalize on.

A FiveThirtyEight forecast gives Biden a 65% chance of winning the state. But after the president's stunning 2016 upset, Democrats remain on edge.

Andrea Pirlo: Messi is still on top. With such players, we must hope that they do not have the best day
The figures of Robert Lewandowski, which frightens not only the locomotive
Who will be the top scorer in the Champions League?
La Liga President on the departure of Ronaldo and Neymar: it is better to leave because of taxes than because of anything else
Kane and Son gave each other 29 assists in the Premier League. Only Lampard and Drogba (36) did it more often
Veron about Messi: Playing in Barca gives him discomfort
Mitryushkin on the move to Fortuna: Germany is a country of goalkeepers. I can learn a lot here
Source https://www.foxnews.com/politics/why-arizonas-latino-vote-democrats-tailspin

‘Blood of Zeus’ on Netflix: Your Guide to the Cast and More

The Wanted's Tom Parker and Wife Kelsey Hardwick Welcome Baby No. 2 Amid His Brain Cancer Battle

Is There Any Safe Way to Socialize Inside This Winter?

The Talk Celebrates Halloween 2020: See the Cast Transform Into Willy Wonka and Friends

Trump Campaigns With No Agenda

How to snag 3 months of Amazon Unlimited Music for free

The polls could be wrong. But that may help Biden, not just Trump.

Who are the Asian Americans still voting for Trump in spite of his 'China virus' rhetoric?

What the U.S. Can Learn From How Other Countries Voted During the Pandemic

Gordon Ramsay responds to TikTok user who claims the chef can't cook: 'I wouldn't trust you running my bath'

Emma Thompson to Star in Comedy ‘Good Luck to You, Leo Grande’ From Sophie Hyde

US must act against Iranian diplomats over alleged election hacking, there must be consequences: Rep. Zeldin

A Live-Action ‘Assassin’s Creed’ Series is Coming to Netflix

“We’re working on it:” Pope’s COVID advisors and the mask

The Cosmos of Medical Wearable Devices

Why the Best G.D.P. Report Ever Won’t Mean the Economy Has Healed

Joe Biden campaigns in the new battleground state of Georgia