Women pay respect to Susan B. Anthony at her grave in Rochester

How grateful they must be — the people, women mostly, who flock to Mount Hope Cemetery in Rochester, New York, just to stand in the presence of Susan B. Anthony.

"It was really amazing. Like I wasn't reading from a textbook anymore — I was with her," said Emma Mittiga. She came to the grave of Susan B. Anthony for what is becoming a Rochester tradition: showing the suffragist in a very tangible way that her work was not in vain.

After Anthony died in 1906, her grave went mostly unnoticed. But four years ago, about 10,000 people showed up to put their "I voted" stickers on her headstone.

That gesture came with unintended consequences. Unfortunately, the gummy residue of all that affection was damaging the marble.  So this year, they covered her headstone with a Plexiglass sleeve, allowing for layers of tributes for generations to come. 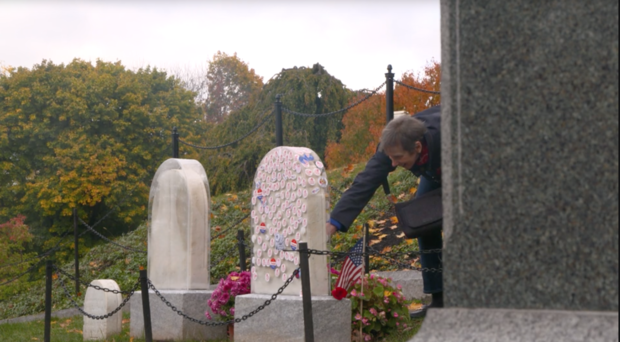 A visitor places a sticker on the glass covering over the headstone.  CBS News

Sarah Campagna brought her daughter Clara. "She worked so hard her whole life," Sarah told Clara. "She died not even knowing if it would happen."

"We're not going to have children who will take those next steps for us if we don't educate them now," Sarah told CBS News.

Karen Moretti says we also need to educate a lot of adults.

"I haven't always been so passionate," she said.

"It's almost like we took it for granted," said CBS News.

"Were you in our car on the way coming here?  Because I said to her, 'I can't believe I was so clueless for many parts of my life.'  And now I am so passionate," Moretti responded.

During our day at the gravesite, we saw that passion takes many forms, from downright jubilation to overwhelming emotion.

The only constant was the way people put on their stickers: all of them with such tenderness as if rubbing liniment into the injustice.

It was healing, which is why I believe voting should always be a two-step process. First a ballot, and then a nod to all those who made this sacred right possible.

To contact On the Road, or to send us a story idea, email us: OnTheRoad@cbsnews.com.

Roberto De Derbi is the new Serie A coaching star. His Sassuolo is the best control team in Italy, but it lacks improvisation
Wayne Rooney: Chelsea and Mourinho wanted to sign me, there were also Real Madrid and Barcelona
Eriksen can go to Real Madrid, ISCO-to Inter as part of the exchange (Sky)
Beckham returned to the cover of FIFA 23 years later. For this, he will get more than paid in real PSG
Barcelona transferred a 5 million Euro bonus to Borussia for Dembele's transfer. Catalans have already paid more than 130 million
Ramos and Benzema out of Real Madrid's bid for the Champions League match with Inter
Griezmann on Messi: I admire Leo, and he knows it. We have a great relationship
Source https://www.cbsnews.com/news/susan-b-anthony-women-voters-rochester-new-york-cemetery/

Biomimicry: How Nature Is Inspiring Better Medical Devices for the Future

Can Wearable Electronics be Fashionable?

US charities raise millions in wake of Beirut port blast

Bret Michaels Ready to Rock Out of Scottsdale Home

What Can We Do To Avoid Plastic?

Trump is leaving minority votes on the table

Virus Surge, Once Centered in Midwest, Accelerates in 45 States

Only two countries have collected rocks from the moon. For China, it's just the beginning

Rush Limbaugh, Laura Ingraham start to adjust to the reality of a Biden presidency

Ex-Police Officer Charged With Manslaughter in 2017 Killing of Suspect

The Apron Throughout History

Ex-MSNBC producer: Andrew Yang was on 'list' of 2020 Dems banned from appearing on Lawrence O'Donnell's show

Family files suit over Publix employee's death. It says company failed to protect him from Covid-19

Biden Taps Ex-Fed Chair Janet Yellen to Lead the Treasury, According to an AP Source

Analysis: Trump's effort to steal the election is done

5 takeaways from Biden's first wave of nominations and appointments

China’s Cainiao Is Revolutionizing How Goods Get Delivered. Will the Rest of the World Follow Its Rules?

Wisconsin Lawyer For Trump Campaign Takes Action To Throw Out His Own Ballot: Report

Biden’s choice for secretary of Defense still in flux

COVID-19 vaccines were developed in record time – but are these game-changers safe?

US Airports Screen Millions of Travelers Ahead of Thanksgiving