Eight years on, no justice for Imran Farooq’s family 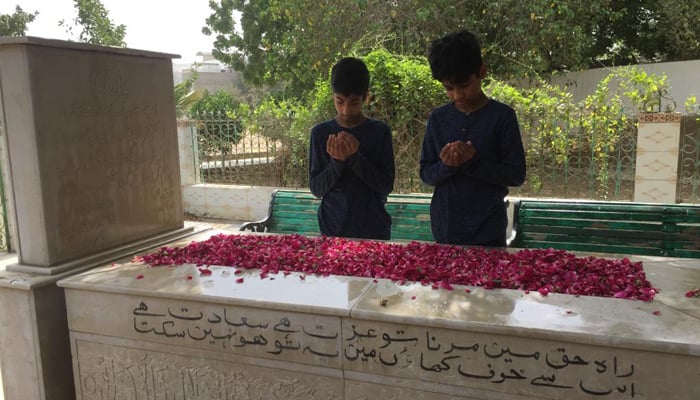 LONDON: Exactly eight years after the former Muttahida Qaumi Movement (MQM) leader Dr Imran Farooq was killed in London, his widow Shumaila Imran Farooq has called for the prosecution and punishment of killers before a British court of law.

On the 8th anniversary of her husband’s murder here in Edgware which shook Pakistan and Britain, Shumaila Imran Farooq said in a message that 16th September is “a very painful and sad day” for her.

She wrote that her sons Alishaan Farooq, 13, and Wejdaan Farooq, 11, are praying for their father and justice. “My wish is that those who killed him are caught. Ameen,” she wrote in reference to Mohsin Ali Syed and Kashif Khan Kamran, who killed Dr Farooq and then successfully fled to Pakistan from Heathrow airport to Colombo and then to Karachi where they were arrested by Pakistani authorities.

Eight years on, Shumaila Farooq and her two sons await justice and there is little hope left that the killers will ever be prosecuted in Britain unless both Pakistan and Britain stop playing games over the murder.

Dr Imran Farooq was killed on 16 September 2018 on Green Lane in Edgware by Mohsin Ali Syed and Kashif Khan Kamran while he walked home from his workplace. There are reports that Kashif Khan Kamran died in the police custody and Mohsin Ali Syed remains in detention alongwith Moazzam Ali Khan and Khalid Shamim – all of them once linked with the All Pakistan Mohajir Students Organisation (APMSO) and the MQM, respectively.

Last month, Dr Imran Farooq’s widow took her sons Alishaan and Wejdaan Farooq to Karachi to visit the grave of their father.

On Sunday, the Metropolitan Police told this correspondent that “the Met Police investigation into the murder of Imran Farooq remains active and we are committed to bringing his killers to justice”.

Off the record, police sources confirm that the murder investigation has suffered a stalemate because of the legal wrangling between Pakistan and the UK. The UK police believes that Pakistani authorities didn’t help the case by refusing to share details of the arrest of killers on time and the correct requested information. They blame Pakistani authorities for not talking to them first and then prolonged delays in facilitating requests. The biggest complaint of the Met police is that Pakistan started proceedings against the suspected killers inside Pakistan but the Met wanted the suspects to be handed over to Britain to be tried in a court of law here – the crime scene.

When Dr Imran Farooq was killed, he had fallen out with the MQM founder Altaf Hussain and was in the process of making his own political party. In media, the MQM has been widely blamed for the murder of its own former leader but the investigators in Britain believe that there is no evidence to link Altaf Hussain with the murder of Farooq.

Altaf Hussain’s cousin Iftikhar Hussain – alongwith at least seven others – remained on the police bail for around two years but he was cleared after the investigation didn’t move forward.

Pakistan on its part says that it doesn’t have an extradition treaty with Britain but there are many recent examples where Pakistan sent suspects to Britain, involved in serious crimes – who fled to Pakistan after committing crimes here.

During his tenure as Interior Minister, Chaudhary Nisar actively pursued the case and he wanted the case to be resolved but nothing much happened as Pakistan and UK investigators continued to argue.

Prime minister Imran Khan has made Shaheryar Afridi as state minister for Interior and it will be his responsibility to deal with Britain on the case of Imran Farooq murder. It will be interesting to see if the new government takes steps to end the deadlock so that to play its role in providing justice to the family of Dr Imran Farood.

The MQM leadership has denied involvement in the murder and termed it a conspiracy against the party.

Is speedy justice needed only in NAB cases?

The monster of circular debt