From Berlin to the barracks: a Syrian rebel returns home 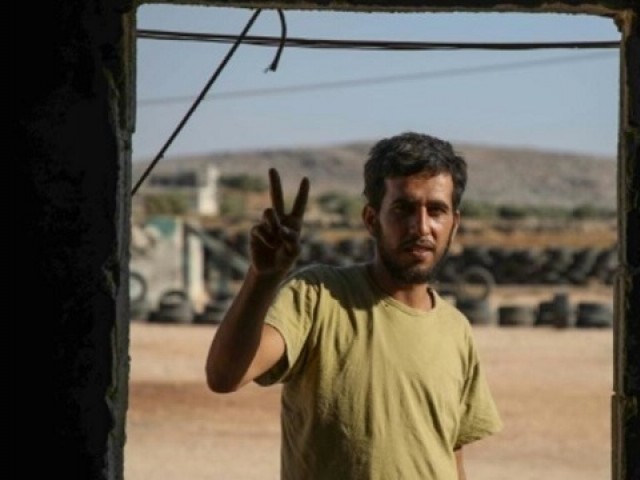 Mohammad al-Naeemi, a Syrian who returned from exile in Germany to join a rebel group, flashes a victory sign at a training camp near the Bab al-Hawa crossing between Iblib province and Turkey on July 18, 2019. PHOTO: AFP

SYRIA: Mohammad al-Naeemi had everything he could possibly want living in exile in Germany, but he returned to war-torn Syria anyway to fight President Bashar al-Assad’s regime.

Clutching a rifle to his chest, his back flat against the ground, the 23-year-old shimmies across a dry field in northwestern Syria on his graduation day from training to join an armed rebel group.

“I returned to give back to my country,” said the young fighter, wearing a black T-shirt and beige combat trousers.

With an opposition group cap fit tightly on his head, he powers through push-ups, counting each one out at the top of his lungs in unison with fellow recruits.

From now on, “I’ll reside in military barracks and on the front lines,” he said.

“It’ll be the best place I can possibly live.”

Naeemi was a high school student in Syria’s southern province of Quneitra when peaceful protests demanding change erupted across the country in 2011.

After a brutal crackdown on the demonstrations spiralled into war, he joined the armed opposition for several years.

In 2015, fearing a regime takeover of his region, he decided to leave his war-torn country and join his siblings in Germany, he said.

Travelling over the summer, he and friends crossed Syria’s central desert to the Turkish border, before travelling by sea to Greece, and then by land onto Germany.

“I lived in Berlin. I was studying” German, he said.

“I had an ordinary life. I had rights like any German citizen and a monthly stipend. I wanted for nothing,” he said.

“But I wasn’t happy and I constantly missed my home country,” he added.

Syrian government forces have taken back large swathes of the country since Russia intervened on behalf of Damascus in 2015, including Naeemi’s home province of Quneitra last year.

Since late April, regime and Russian forces have ramped up their deadly bombardment of the holdout opposition bastion of Idlib, which is controlled by Syria’s former al-Qaeda affiliate Hayat Tahrir al-Sham.

The strikes and rocket fire have killed more than 600 civilians in the militant-held region of some three million people, almost half displaced by war from other parts of the country.

“The fierce regime campaign on Idlib” and a government takeover of his hometown are the main reasons Naeemi decided to head back to Syria, he said.

“My parents opposed my decision and tried to stop me from returning… but I insisted,” said Naeemi, who has no relatives in the militant-run bastion.

He arrived in northwest Syria last month and immediately joined Jaysh al-Izza, a formerly US-backed Syrian rebel group active in the north of Hama province and parts of Idlib.

He spent one month in a rebel training camp near the Bab al-Hawa crossing with Turkey, where life was governed by strict routine.

He woke up early everyday for military drills, which consisted of diving through burning tires, jumping over cement blocks and shuffling across trenches.

He also sat for classes in religion and ethics.

His unit was named after Abdel-Basset al-Sarout, a Syrian goalkeeper turned opposition fighter who died last month of wounds sustained in battle against regime forces.

The group consists mainly of fresh recruits spurred into joining rebel ranks by the latest flare up in Syria’s northwest, said Mustafa Bakour, a rebel commander.

“Each one of these men has a story,” he said from the camp.

With training now over, Naeemi said the “hard part” is behind him.

Looking back, he said he has no regrets.

“I liked Germany and considered it as my home but there is nowhere like my country Syria,” he said.

“I don’t regret my decision, I did not return for money or wealth. If money was the goal, I would have stayed in Germany.”

IOK is a question mark for international community: Aleem

US reports record daily spike in Covid-19 cases with almost 50,000 contracting the disease

‘The Truth’ — who wants a French screen-legend stand-off?

Sanjay Leela Bhansali to be questioned by police

I’m like a father figure to Kareena and Abhishek Bachchan: JP Dutta

Anushka on her idea of storytelling

‘Aarya’ was directed all over again at the editing table

Education Should Reach Every Home

Of altruism in Islam

RAW on the rampage in Pakistan

Up to 60% of usual capacity will be allowed to attend 2020 French Open, say organisers

Younis Khan held a knife to my throat when I offered him batting advice: Flower

Wimbledon says thanks to NHS with strawberries

Forget minus one, it’s going to be ‘minus PTI’: PML-N leaders

Another crucial challenge for the PTI government

Writing in the time of covid-19

Custodians of The Back Door

Forget ‘minus one’, it’s going to be ‘minus PTI’, says PML-N

Anyone wishing to move no-trust motion against PM Imran is welcome to try: President Alvi