Model Colony, a day after the nightmare 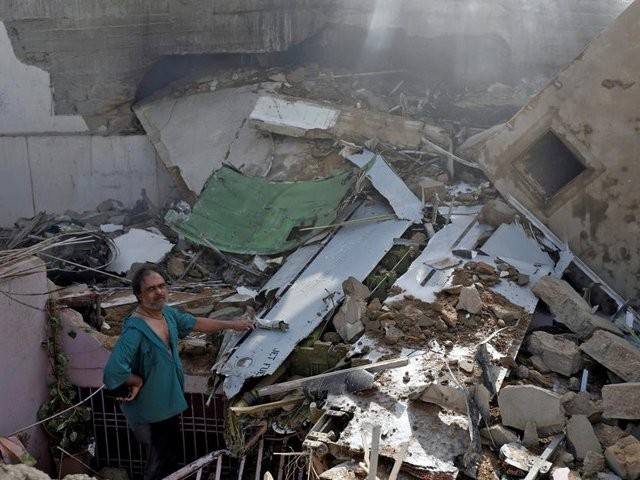 KARACHI: Friday turned out to be a long day, full of trials, tribulations and tragedy, for the residents of Model Colony, a neighbourhood that now presents a picture of devastation, reeling from the aftermath of a plane crash.

It was under the scorching heat of the afternoon sun that Pakistan International Airlines (PIA) flight PK-8303, carrying 99 passengers from Lahore to Karachi, plunged into locality just moments before landing.

What came next was cries, destruction, fire, rubble, chaos, uncertainty and terror.

The fear still grips its residents who are struggling to coming to terms with the reality of what has befallen them.

At least 15 houses in Jinnah Garden, the area in Model Colony most affected by the crash, have been badly affected while the blackened, sooty walls of most houses along the street that bore the greatest degree of the crash’s impact continue to remind the residents of the nightmare.

“I was at my house when we heard a loud blast,” recalled Noman Shami, a resident of the area, whose house has also been damaged. “The walls shook under the impact of the explosion and it felt as if an earthquake had struck,” he said, reliving the tragedy. “We were all inside, too scared and frightened go out. We stayed inside, praying for our safety, even though we could hear the cries of the people outside.”

Before silence fell, Shami said he heard cries of Allahu Akbar coming from the wreckage.

Another resident of the street said that he was about to leave in his car when the crash happened. He rushed back inside the house as the plane fell apart.

“I feared that none from the family living on the upper story of my house would survive the tragedy but we sighed in relief when eventually one of them came downstairs,” he said. “But three members of the family living in the house opposite to mine have been injured. It was terrifying and we didn’t have the courage to step out for a long time.”

The extent of damage

One side of the street is lined by 120 square feet houses that have been badly affected by the crash, while the larger houses on the other side suffered relatively less damage. The upper storeys of the houses are in bad shape, with wreckage from the plane still littering some rooftops.

Eyewitnesses, on condition of anonymity, told The Express Tribune a blaze had erupted soon after the aircraft nosedived in the neighbourhood. The roaring flames terrified many residents into staying inside until law enforcement personnel and rescue teams, including firefighters, reached the spot and began rescue work.

For many in the neighbourhood, the nightmare is over, at least on the surface. But the residents continue to suffer from its ramifications.

One of the residents said that gas and electricity supply to the street had been suspended and with the water tanks of most houses being badly damaged, they were now living in abject conditions without basic necessities.

Others said that federal government teams have surveyed the area to gauge the extent of the damage. They claimed that they have been told the owners of badly damaged houses would be given Rs1 million in compensation and those whose houses had been damaged to a lesser degree would be given Rs500,000 and Rs250,000, depending on the extent of the damage.

As the residents of Model Colony struggle to wrap their heads around what happened, rescue and law enforcement personnel have amped up the security and surveillance in the area.

On Saturday, Pakistan Army, Rangers and Special Security Unit personnel remained deployed in the neighbourhood all day long, not allowing any irrelevant person, including media representatives, to enter the locality. Even the residents of the affected streets were only allowed entry after proper inquiry, amid tight security arrangements.

The area was cordoned off early in the morning and officials from utility companies, such as K-Electric (KE) and Sui Southern Gas Company (SSGC), too had to seek permission before entering the neighbourhood.

However, KE, SSGC, Karachi Water and Sewerage Board, Civil Aviation Authority and PIA officials, as well as members of welfare organisations, were later allowed to visit the locality.

A police picket has also been set up at one end of the street.

Meanwhile, the wreckage and the debris from the aircraft was moved to a corner of the street with the use of heavy machinery, so that it could be used for preparing the forensic report.

The rubble from the houses was cleared by a team of Pakistan Army’s engineering wing and district administration officials.

'Protests will continue until MSR is released': Demonstrations held on first day of Eid-ul-Fitr

For world’s largest Muslim country, a virus-disrupted and bittersweet Eid

Dubai tests its tech capabilities in fight against Covid-19

SpaceX ready to launch astronauts into space for the first time

In pictures: Muslims across the globe celebrate Ramazan

Pakistan’s ICC rankings across all formats is unacceptable: Babar Azam

Soccer players in Latin America looking for help amid virus

Best seats at the track: Race viewing from comfort of condo

Kante prepared to miss rest of season due to COVID-19 concerns: reports

This Is All I Got

In Mexico City, experts find bones of dozens of mammoths

Woman who kept husband in freezer sues for return of body

Fiber optic tech could save date palms from infestations