Venezuela’s baseball season kicks off but virus takes a toll 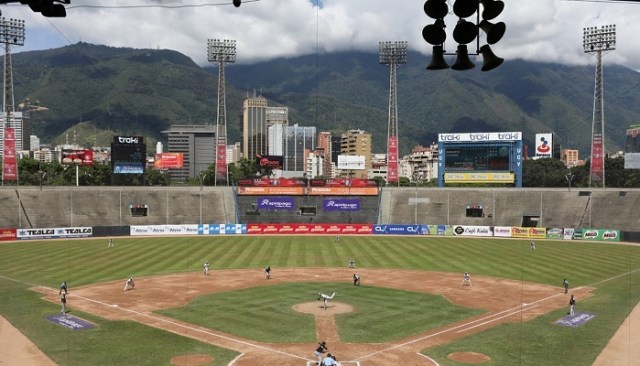 Venezuela’s storied baseball season kicked off Friday — and an economic crisis and global pandemic will make it one for the record books.

Stadiums that have long been a temporary escape from the South American country’s mounting poverty and political turmoil were empty as players took their spots on the field. No fans were allowed to curb the spread of the coronavirus. Players and coaches will have to undergo weekly testing to stay on the roster.

Still, many were eager to get back to the nation’s favorite pastime.

“This is what I live for,” said Daniel Mayora, a third baseman with the La Guaira Sharks. “This is my job and how I’m able to support a family.”

Venezuela is known worldwide as a producer of great players like Miguel Cabrera and José Altuve who grew up playing the sport. But recently players have repeatedly found themselves in the midst of calamity.

Last year, U.S. Major League Baseball told players looking to hone their skills in the offseason by participating in the Venezuelan league to stay away — noting Trump administration sanctions on President Nicolás Maduro’s government. The Treasury Department eventually granted licenses to play with teams like the La Guaira Sharks and the Caracas Lions that are privately run.

The country’s severe economic downturn has also taken a toll, compelling the Venezuelan league to shorten its season by a third. The International Monetary Fund projects a 25% decline this year in Venezuela’s already battered GDP, while soaring hyperinflation in recent weeks has further diminished the bolivar’s value.

The coronavirus has thrown yet another curve at Venezuela’s baseball season. At least 40 players tested positive for the virus as preparations got underway. And while the start date was originally slated for December, officials unexpectedly moved it up. That meant players had almost no time to train.

“It’s not easy for any player to get rapidly into shape,” said Amador Monte, head of the Venezuelan Professional Baseball League. “But I think they will adjust.”

Some are skeptical of the timing, noting that Maduro opted to relax the country’s eight-month-old pandemic lockdown and start the baseball season before upcoming legislative elections. The election is likely to pave the way for a one-party system in Venezuela. Congress is the last branch of government in opposition hands and Maduro allies are expected to win a clear majority because adversaries are boycotting the vote.

“They want to give the appearance of normality,” sports writer Mari Montes said.

Caracas Lions manager said Richard Gómez said his team is doing its best to give viewers watching from home an exciting game despite the challenges.

“The conditions in which we are playing this season are so adverse we didn’t even have time to train,” he said. “Not even for two weeks.”

“I spent 10 months without working and they were the hardest,” he said. “But finally we are here. We are a baseball nation and no one can live without it.”

Lampard on Werner's unforced penalty: I'm upset. He gave a lot to Chelsea, it just went wrong
Napoli scored against Verona in 8.9 seconds. After the start of the match. Only Milan scored faster in Serie A
Werner did not score a penalty for the first time since October 2018. The series of 8 goals in a row was Interrupted
Arsenal will pay Real Madrid 2 million euros for the lease of Edegor. The transition can make Monday
Vladimir Gazzaev will lead Siena from the 4th Italian League instead of ex-striker Milan Gilardino
Ozil has signed a 3.5-year contract with Fenerbahce
Mikel Arteta: It was an honor to play with Ozil and train him. His success is undeniable
Source https://www.lapatilla.com/2020/11/30/venezuelas-baseball-season-kicks-off-but-virus-takes-a-toll/